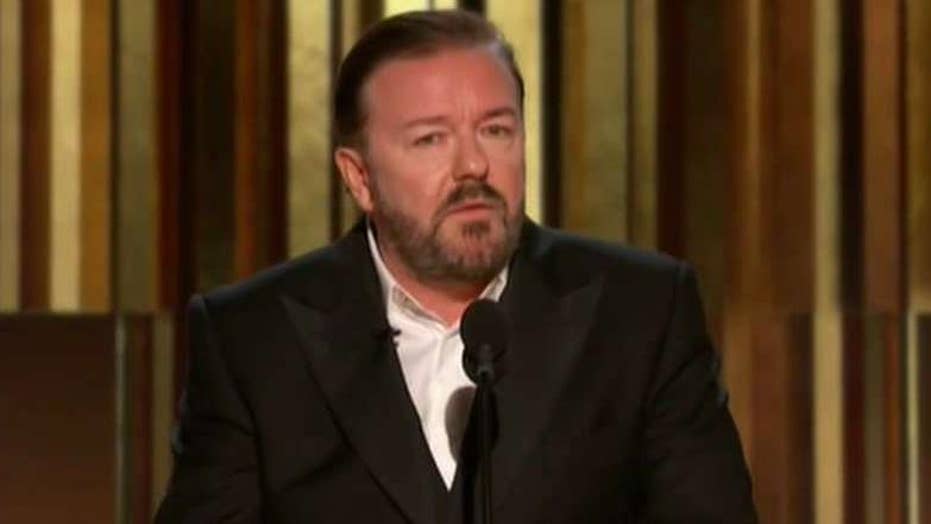 Gutfeld on Ricky Gervais and the Golden Globes

Television has a way of uniting Americans in a way nothing else can.

The "staged" moon landing. The 1980 Winter Olympics. And, the 2020 Golden Globes, where Ricky Gervais gave a bloody nose to the greatest villain.

There, he said everything you’ve ever wanted to say to that self-obsessed pile of pulsating flesh known as Hollywood.

"Apple rolled into the TV game with a morning show ... a superb drama about the importance of dignity and doing the right thing, made by a company that runs sweatshops in China," Gervais said. "You say you're woke, but the companies you work for ... Apple, Amazon, Disney — if ISIS started a streaming service, you'd call your agent, wouldn't you? So if you do win an award tonight, do not use it as a platform to make a political speech."

Hello, 911? I'd like to report a massacre at the Beverly Hilton.

You know Hollywood's therapists just hiked up their prices.

Gervais also mocked their desperate desire for wokeness, explaining why he left out the "in memorium" segment, which honors performers who died in the past year. That was so clever few in the crowd got it.

Then there was this punch in the face. "In this room are some of the most important TV and film executives in the world," Gervais said. "He's coming for you."

How dare you bring up our industry's rapists, at this fine event? Some of them might be here!

"No one cares about movies anymore. No one goes to cinema. No one really watches network TV. Everyone's watching Netflix," Gervais added. "You could binge-watch the entire first season of 'After Life' instead of watching this show. That's a show about a man who wants to kill himself because his wife dies of cancer, and it's still more fun than this. Spoiler alert: Season Two is on the way, so in the end, he obviously didn't kill himself, just like Jeffrey Epstein."

All in all, it was a dream come true for anyone tired of Hollywood telling you how dumb and racist America is, even as they continue to take all that money from us dumb racist Americans.

Remember, Gervais ain’t no righty. He's an old-school liberal who believes in freedom of expression, but also freedom from the hypocrisy of the intolerant woke.

You think the woke crowd will actually wake up?

Nope. They're too vain, too insecure, and self-unaware to see the truth, even if it came raining down from the beery mouth of a pudgy Brit.

Hats off to Ricky, who didn't really tell a joke. He just exposed the biggest one of all: Hollywood