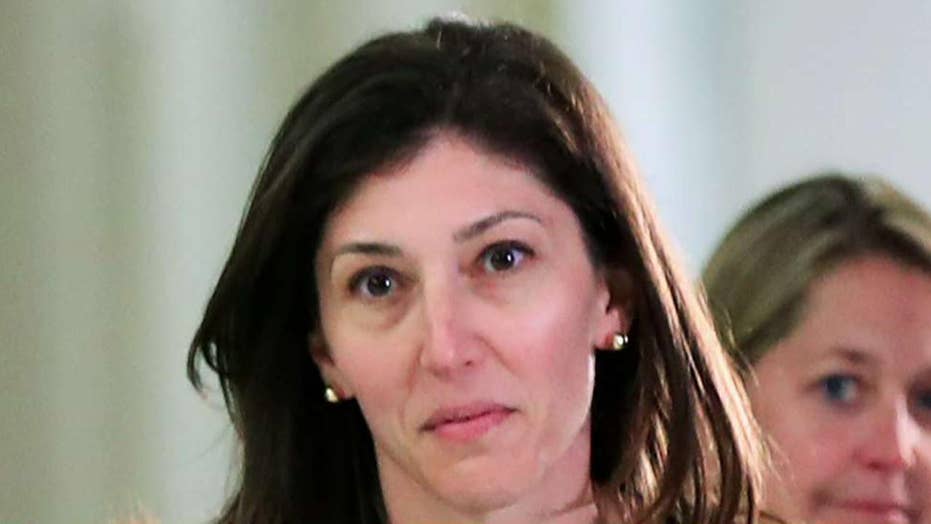 Former FBI lawyer Lisa Page has been the object of President Trump's criticism since her personal text messages made her a public figure; chief congressional correspondent Mike Emanuel reports from Capitol Hill.

Former FBI lawyer Lisa Page is not a victim, except insofar as she victimized herself by her own actions.

Page does, however, fit a pattern of what psychologists call “disengagement.” It’s what guilty people often do. They convince themselves that they are victims, not villains, by redefining their aberrant behavior. They attempt to persuade others that their conduct was innocuous or moral. They minimize and rationalize reprehensible acts while distorting the truth. In the process, they cleverly shift the fault to others. Cynical trial lawyers have a phrase for it: "Blame the victim."

Page recently performed this feat of mental gymnastics in a fawning interview with The Daily Beast. In her distorted view of the world, President Trump is the villain who has victimized poor Lisa. The reality is just the opposite.

The ex-FBI lawyer carried on an extramarital affair with Peter Strzok, the fired head of counterintelligence at the FBI. Both individuals played pivotal roles in clearing Hillary Clinton of criminal charges for mishandling classified documents on her private and unsecured email server. The Page-Strzok duo was the antithesis of fair and impartial. Their text messages, uncovered by the inspector general at the Department of Justice, were replete with adoring compliments of the very woman they were supposed to be investigating.

They lauded Clinton’s nomination and stated, “God, she’s an incredibly impressive woman” and “She just has to win now.” Four months before the FBI would even interview Clinton, Page predicted that she would become president. Of course, that would have been impossible if the FBI had recommended a criminal indictment. In another text, Page warned her paramour that any aggressive tactics in their investigation would backfire on the bureau once they absolved Clinton and she became president. The fix was in.

This was reinforced by a text that Strzok sent Page on March 3, 2016, when he wrote, “God, Hillary should win 100,000,000-0.” Pause for a moment to consider what that message meant. Two key FBI officials were prophesizing a Clinton presidency that could happen only if they first ensured that she would escape criminal charges. The process was corrupted.

Once Clinton was absolved, Strzok and Page turned their attention to the political opponent who was the only remaining obstacle to her path to the White House: Donald Trump. The FBI launched an investigation on the unfounded accusation that Trump was “colluding” with Russia to win the presidential election. A week later, the two lovers exchanged a message that crystallized their intent to bring down Trump, whom they referred to as a “menace.”

Strzok: Thanks. And of course I’ll try and approach it that way. I just know it will be tough at times. I can protect our country at many levels, not sure if that helps.

Two days later, Page became distressed at Trump’s rising status in the polls and precipitated another text exchange about the possibility that their favored candidate, Clinton, might lose her bid to become president:

Page: He’s not ever going to become president right? Right?!

When confronted with dozens of other messages extolling Clinton and disparaging Trump, Strzok had the temerity to tell Congress, “I do not have bias.” He insisted, “Those text messages are not indicative of bias.” No one could read through the multitude of incendiary Strzok-Page messages without recognizing their strident political agenda and personal bias against the very man they were investigating.

In those texts, we see the mindset that led to the greatest mass delusion in American political history. Without any factual basis, without anything more than a perverted kind of wishful thinking, two people who should have known better believed that only a vast international criminal conspiracy could lead to President Trump’s election.

Strzok: I want to believe the path you threw out for consideration in Andy’s office that there’s no way he gets elected –but I’m afraid we can’t take that risk. It’s like an insurance policy in the unlikely event you die before you’re 40.

Page later confirmed that the “insurance policy” was the FBI’s then-secret Russia “collusion” investigation of Trump. Under their plan, it would be quietly investigated by the bureau but held in abeyance unless and until the “unlikely” event occurred – the election of Trump. If he defied all expectations and prevailed on election day, the investigation would then be kicked into overdrive. The spurious allegation that Trump was a Russian asset would be pursued with vigor.

In their minds, Trump was a threat only if he became president. The chimera of “collusion” might then be used against him to undo his presidency and drive him from office. It was the FBI’s version of an “insurance policy” against the risk of Trump. When, indeed, it happened, Strzok wrote that his investigation of the new president could be used to impeach him.

Numerous other texts between Page and Strzok show a stunning hostility toward the man they were investigating. They called him “awful,” “loathsome,” a “disaster,” a “f***ing idiot,” an “enormous do*che,” and other disparaging names that were laced with incandescent profanity. Republican supporters were smugly branded as “retarded,” “the crazies,” and “ignorant hillbillies” who “SMELL.”

Their toxic rants underscored an abiding enmity toward Trump that poisoned any chance that the FBI’s investigation would be neutral, objective, and fair. Attorney General William Barr later agreed, stating that “it’s hard to read some of the texts and not feel that there was gross bias at work and they’re appalling…”

It was fatuous for either Page or Strzok to deny bias in the face of such graphic and overwhelming evidence to the contrary. In the conclusion of his five-hundred-page report issued in June of 2018, the inspector general stated that the Strzok-Page communications “are not only indicative of a biased state of mind but imply a willingness to take official action to impact a presidential candidate’s electoral process.” The proof was self-evident.

The totality of evidence and the disparate handling of the Clinton and Trump cases provides more than sufficient evidence that unconstrained bias drove Page, Strzok, and others at the FBI to treat Clinton with extraordinary deference but to target Trump with a vengeance. One outcome was predetermined; the other was preconceived.

The extramarital affair between Strzok and Page was a microcosm of the FBI dysfunction that was endemic in the upper echelons of the agency. As insipid as their pro-Clinton and anti-Trump text messages were, they illustrate how pervasive bias contaminated both the Clinton and Trump investigations. Strzok, Page, and others considered themselves above the law because they were the law.

They could do as they pleased, even violate rules and regulations that warned against such intimate personal relationships because it could make them susceptible or vulnerable to recruitment or blackmail by a foreign adversary.

When a top official at the FBI learned of the affair, he did nothing. Instead of removing Page and Strzok from the Trump case, they were promoted to Robert Mueller’s special counsel team.

Yet, Lisa Page is determined to re-write history in order to play a starring role as “the victim.” At no time has she accepted a scintilla of personal responsibility for her actions. Instead, she seeks to portray Trump as the villain because he dared to speak publicly about her conspicuous bias against him.

Poor Lisa. Someone else is to blame. Cue the sad violins.