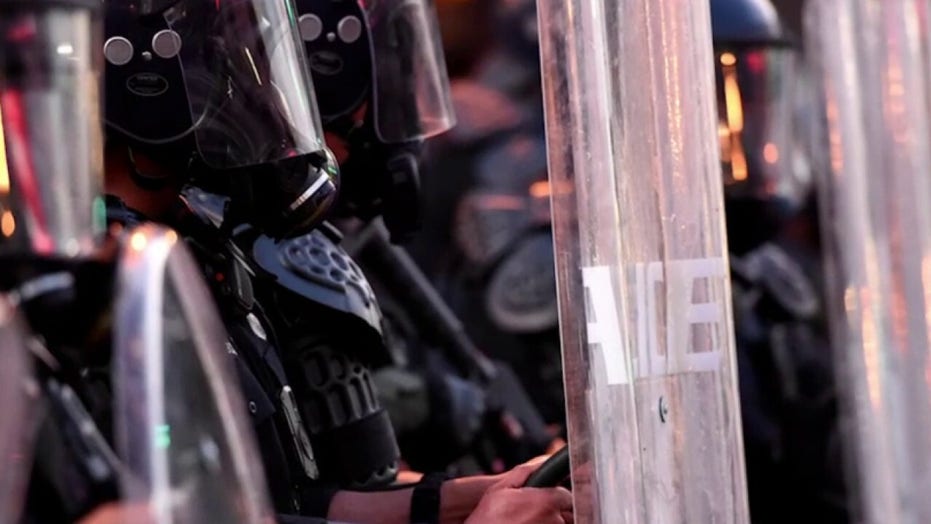 Police reform in focus as protesters call for change

The White House was non-committal about Joe Biden's vow to set up a police oversight board if elected; Doug McKelway reports.

George Floyd’s murder is a wakeup call to America. And now young black men are screaming the loudest that police misconduct must come to an end.

The decision Wednesday to upgrade charges against fired Minneapolis policeman Derek Chauvin to second-degree murder and to charge three other officers in the murder of Floyd was a positive step forward, but much more needs to be done.

My heart also breaks for the families of the dozens of people shot and killed in Chicago and other cities every weekend in America. It also breaks for the millions of African-American babies killed every year at the hands of Planned Parenthood. And it breaks for black police officers whose lives were lost in the riots, like retired St. Louis Police Capt. David Dorn. His black life mattered, too.

My heart also breaks for the lost angry, and aimless young black men who commit violent crimes. And for the lives they’ve claimed, the bones they’ve broken, and the businesses and livelihoods they’ve destroyed.

The rioting, looting and violence that have convulsed cities across America over the past few days are the culmination of years of failures on all sides of the political aisle to address the issues that have now broken America in ways that seemed impossible just months ago.

The images of the looting, rioting, and awful violence that have permeated our airwaves and filled our social media feeds since Floyd was killed have sickened me as well. This is simply not sustainable as a country.

Contrary to popular belief, there was no talk of “both sides” when it comes to conservative and liberal perspectives on Floyd’s murder. There was no “on the one hand” and “on the other hand.” Both sides seem to agree that Floyd’s senseless killing was a gross miscarriage of justice and that the officers involved should be punished.

For a brief moment after the shocking video of Floyd’s murder came to light, law-and-order conservatives and Black Lives Matter leftists agreed on something, and it looked as if some sort of reconciliation was on the horizon.

Then all hell broke loose.

The rioting, looting and violence that have convulsed cities across America over the past few days are the culmination of years of failures on all sides of the political aisle to address the issues that have now broken America in ways that seemed impossible just months ago.

Conservatives declare themselves the law-and-order party while turning a blind eye to the ways in which the American criminal justice system is set up to disproportionately imprison young black men.

Liberals wave the specter of “white racism” as a catch-all response for the ills of the African-American community. To them racism is the only explanation that has caused so many lost young black men to lash out in society in the ways we’ve seen on our screens.

The explanation of liberals is never fatherlessness. It is never the toxicity of black-oriented pop culture. It is never the near-complete destruction of the African-American family. It is only racism. Always, racism.

As I put it in my forthcoming book – “Always a Soldier: Service, Sacrifice, and Coming Out as America’s Favorite Black, Gay Republican” –  “our very modern social media and entertainment culture has managed to enslave the minds of young black people all over again. Liberal gatekeepers in our entertainment and journalism fields stoke the omnipresence of white racism to keep them from achieving their fullest potential. Ultra-wealthy and successful rappers and actors feed blacks a near-constant buffet of oppression to stay relevant and line their own pockets. The constant onslaught of the message of black victimhood in the social media era keeps young blacks locked in constant struggle with their ever-present white oppressors.”

Young black people are angry, hurt and afraid. They’re kept that way by a chattering class who was just weeks ago advocating for extended COVID-19 lockdowns and is now crowdfunding to bail out rioters.

We have seen this country descend into record levels of unemployment due to the coronavirus lockdown.

We will only be able to douse the fire when we show up for these young black men, speak to them and convince them that the only change that will truly save them will start from within.

Mental health issues are skyrocketing. A therapist I spoke with says his practice is at capacity with people trying to deal with post-lockdown depression.

To dismiss the effects of the months of lockdown on what is happening right now would be foolish.

The young black people who are now terrorizing American cities (with more than a little help from Antifa and members of other races) are lashing out because of fear and anger, but also because every societal safeguard against the kind of sustained violence we’re now seeing was taken away during the lockdown.

Face masks are now normalized. Parks and outdoor recreational activities were closed. Almost 40 million people in our country have lost their jobs, throwing many into dire financial straits. Millions of children and young people are out of school.  To me, the defining image of this moment in history is not any of the violence, the looting, or the overall insanity. It is a short video of a black teenager so overwhelmed with emotion at a protest that he sobs as a white police officer comforts him.

As I said on Twitter, multiply the pain that young man is feeling right now times one million, and that is why America is burning.

We will only be able to douse the fire when we show up for these young black men, speak to them and convince them that the only change that will truly save them will start from within.

America will continue to burn in ways visible and invisible because until we find a way to reach them, America’s lost black boys and young men are the embers that will spark the flames.