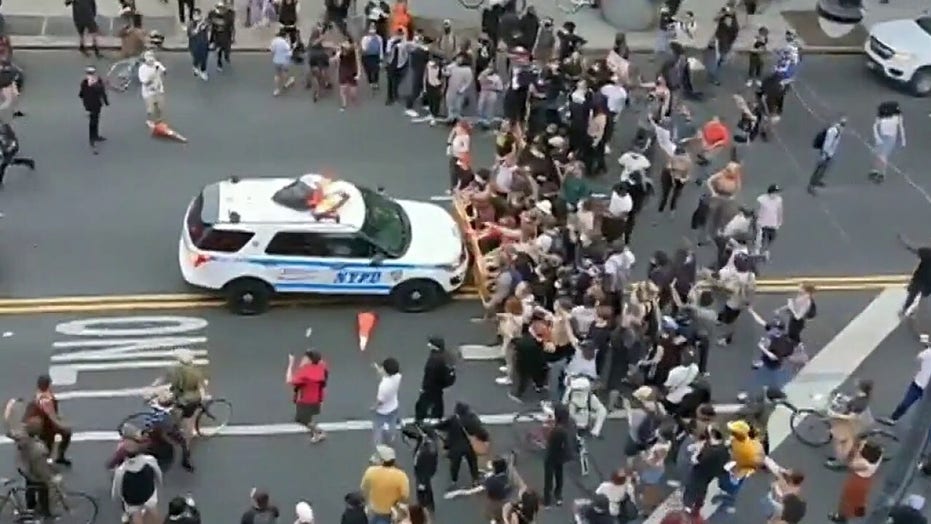 This column originally appeared in the Washington Times.

Courtesy of our educational infrastructure having been transformed into leftist indoctrination centers, the result is politicians who care only about ideology where citizens are collateral damage in their march toward a leftist utopia.

Our media is populated with news-actors who are similarly bound to their teachers’ idols of social justice, political correctness and identity politics. All of our institutions are suffering from the twin masters of identity politics and woke philosophy.

In New York City during the riots, two individuals were arrested for attempting to bomb a marked New York Police Department cruiser with a Molotov cocktail. Upon arrest, police found additional material in the car to make more Molotov cocktails, and the booking complaint alleges they intended to hand out the bombs to other rioters.

The kicker? Both of the suspects are lawyers.

One, Colinford Mattis, a 32-year-old man had been working with a corporate law firm in New York City, and is a graduate of Princeton University. The other, Urooj Rahman, a 31-year old woman, is a graduate of Fordham Law School and was admitted to the bar in 2019.

On her Facebook page, she fashions herself a “human rights lawyer.” His background as an “anti-poverty intern” for a mayor of San Francisco was listed on LinkedIn, as well as being president of the Princeton Black Student Union.

With such promising backgrounds and illustrious educations, we must ask, what went wrong?

Education went wrong, which is a dangerous realization, considering its importance not just as a conveyer of information, but as an important and formidable influence on character and values. With the breakdown of the American family, for many, the leftist indoctrination at the academy is the only instruction on life and principles to which they’ve been exposed.

On Twitter, the Federalist’s Molly Hemingway noted, “Battle lines are more clearly being drawn these days, between those who clearly believe America is irredeemably evil and must be violently overthrown and those who believe America remains greatest country on earth, based on rule of law, individual liberty, inalienable rights. Decades of public education have given former group a *huge* advantage, reinforced by media that awards itself prizes to indoctrinate message. Seriousness of that side now being impossible to ignore, however, finally forces rule of law side to realize fight must be engaged.”

As leftists consumed public education, they accepted open-minded young people into their realm and are now vomiting them back up as heartless anarchists. The issue is not just at Ivy League institutions, it is a systemwide problem.

Case in point is brought to us by the University of Alabama Birmingham (UAB). In the midst of violent rioting in dozens of cities across the United States, and on the same night rioters set fire to Washington, D.C.’s historic St. John’s Episcopal Church, Sarah Parcak, a faculty member of UAB went to Twitter encouraging people to topple a local monument she deemed a racist insult.

“Ms. Parcak began coaching rioters about how to tear down monuments as networks covered the unrest in Washington on Sunday night. ‘PSA for ANYONE who might be interested in how to pull down an obelisk* safely from an Egyptologist who never ever in a million years thought this advice might come in handy,’ Ms. Parcak tweeted. She went on to fire off more than a dozen tweets demonstrating how protesters could topple obelisks …,” The Washington Times reported.

As leftists consumed public education, they accepted open-minded young people into their realm and are now vomiting them back up as heartless anarchists.

On Parcak’s bizarre tweet frenzy encouraging mayhem, Mark Bauerlein, the editor of First Things Magazine, a journal on religion and public life, said, “The crucial point in this maniacal tweet is that this professor has been honored by TED, the Smithsonian, and the Guggenheim,” and asked, “Many advocates of disorder now occupy elite institutions that have in the past been the guarantors of order. Who let them in?”

Kyle Shideler, the director/senior analyst for homeland security and counterterrorism at the Center for Security Policy, has the most direct answer: “They took over the academy and all credentialing. The middle and lower-middle-class families in this country paid millions to let the Weather Underground raise their kids in hopes they would climb the social ladder,” as he responded on social media.

A Fox News producer inquired with UAB if it had any comment about a faculty member encouraging the destruction of property and mayhem on a night when the nation was aflame in violence.

UAB responded, “These are not the opinions of the university. Our 45,000+ students, faculty and staff often use social media to express thoughts that do not necessarily reflect the voice of the university. If a public comment by a member of the campus community needs to be addressed by Student Affairs or Human Resources, it would be. However, personnel and student conduct matters are addressed privately between the individual and the institution.”

Whoever Mattis’ and Rahman’s professors were, they weren’t out fixing up Molotov cocktails Sunday night, but for some reason their young charges allegedly were.

And Parcak was no doubt comfortable in a chair during the 10 p.m. hour on a Sunday as she was tweet-inciting others to put themselves and their futures at great risk. Why put yourself on the line when others who look up to you are too naive to know you’re stuffing them into a cannon?