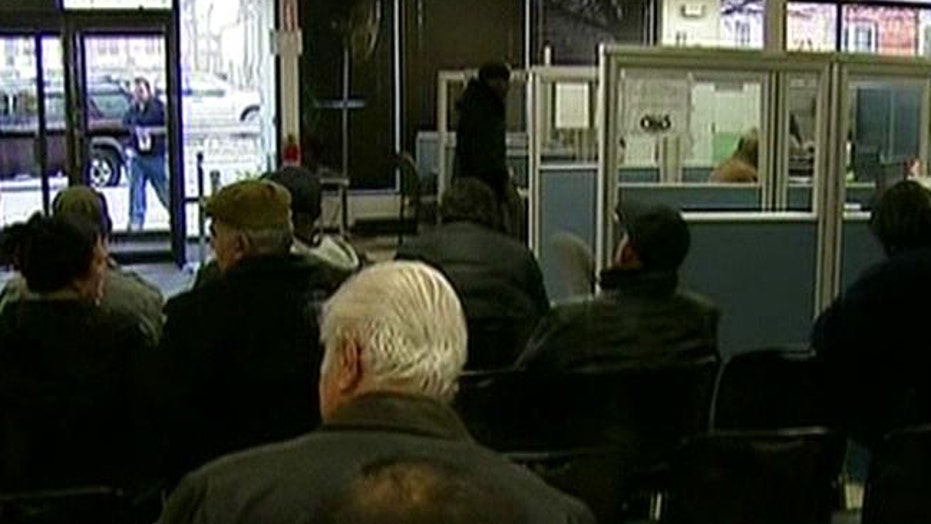 FBN's Peter Barnes breaks down the unemployment report in February.

The new unemployment numbers released Friday look reasonable only because our expectations have are so low.

In February, the 236,000 new jobs added beat out the 166,000 increase in the working age population, but the labor force participation rate remains stuck at a level that is so low Americans haven't seen anything like it for decades. It simply isn't making a dent in the huge number of people who have simply given up looking for work.

Even this last month didn't really help. The number of unemployed Americans fell by about 300,000, but 99 percent of that drop can be  explained by an increase in the number of people who are no longer in the labor force.

Millions of people have simply given up looking for work.

And they have good reason to be discouraged. Job growth has only grown by an anemic 2.5 percent during this recovery. That’s compared to 9.2 percent during the average recovery since 1970 and 12 percent after severe recessions.

A deeper look at these numbers is even more depressing. 4.19 million people were hired in December. The average number of new hires during the recession was 4.4 million per month. During the same length of time prior to the recession, it was 5.3 million.

The dirty little secret about why we can be adding jobs to the labor force -- even as the number of monthly hires remains mired below a horrible hiring rate during the recession -- is because an unusually large number of people are staying in the jobs they already have.

A drop in total rate that people leave their jobs can be a good thing — if, for example, the cause is a decline in layoffs. But that’s not the case. Rather, there’s been a serious drop in the number of American workers choosing to quit their jobs — presumably because they fear not being able to get a new job.

800,000 fewer Americans are quitting their jobs each month than were before the recession began. That’s a whopping 200,000 a month fewer than quits during the height of the recession!

"Quits" aren’t supposed to be falling during a recovery. During a recession, sure: with poor prospects for landing a good new job quickly, people hesitate to voluntarily leave their employers.

But the opposite is supposed to happen in a recovery: people sense opportunity, and they chase it. (The rebound is especially strong after longer recessions, when people who’ve been putting off quitting their finally decide it’s safe to bite the bullet.)

Yet now, according to the White House, we are officially experiencing “recovery.”  Americans have grown even more fearful, however, about quitting their jobs.

If you want to compare our unemployment rate to Europe's, we don't look very good. The so-called “U6” unemployment rate for the U.S. is a better figure for comparing with the European rate. It includes those who are no longer actively looking for work but would take a job if it were offered as well as those who were looking for a full-time job but were forced to take a part-time position. The European numbers don't require people to be actively looking for work to be counted as unemployed.

Americans need to raise their standards for what constitutes good economic news. And if this is what 44 months of "recovery" looks like, we are indeed in bad shape.