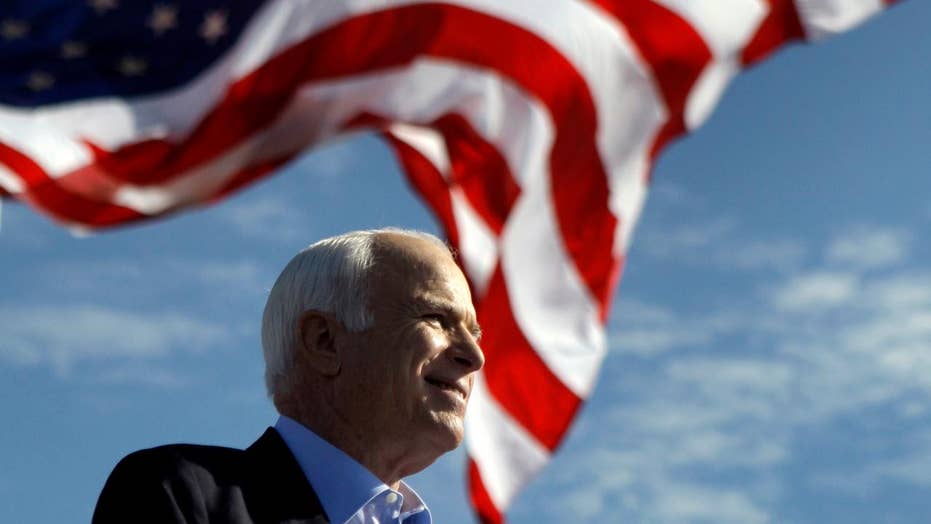 Sen. John McCain died at age 81 Saturday from what we doctors generally agree is the most devastating and deadly of all cancers, a brain tumor known as Glioblastoma Multiforme Grade 4 (GBM).

McCain, a conservative Republican from Arizona, died of the same disease that took the life of the man known as the Lion of the Senate, Democratic Sen. Ted Kennedy of Massachusetts, in 2009.

And in a remarkable coincidence, both senators died on the same date – Aug. 25 – nine years apart to the day.

Cancer is a nonpartisan killer. If there’s any issue that should be able to unite Democrats and Republicans, it should be supporting a sharp escalation in federal funding for expanded research to find out more about what causes this terrible disease and how to better prevent it and treat it.

If there’s any issue that should be able to unite Democrats and Republicans, it should be supporting a sharp escalation in federal funding for expanded research to find out more about what causes this terrible disease and how to better prevent it and treat it.

I can think of no greater tribute our nation could give to Senators McCain and Kennedy than launching a major cancer research initiative and naming it after these two men.

Whenever someone famous dies of a particular disease, millions of people read about it and wonder: could this same disease strike me or one of my loved ones? This questioning will surely happen again.

I have never met a patient with a bad headache, visual change or vertigo who didn’t think he or she might have a brain tumor.

“Could this be a brain tumor?” It’s a question I hear in my office at least once a week, and I’m not a neurologist. Luckily, in the vast majority of cases, the problem is really a migraine or a tension or sinus headache or an infection in the inner ear – something that can be treated.

To give you an idea of the probabilities, more than 38 million people in the U.S. suffer from migraines. While GBM accounts for 52 percent of all primary brain tumors, there are still only 14,000 cases per year in America.  Of course, these statistics don’t take into account how brain tumors destroy lives.

I think what really scares people is the idea that they could be walking along fine one day with little or no symptoms, and be given a death sentence the next. GBM Grade 4, the worst kind – the kind McCain and Kennedy suffered from – has an average survival span of only 14 to 18 months, despite surgery, chemotherapy and radiation treatments.

Symptoms of GBM depend on the location and size of the tumor, and vary from one patient to the next. Common symptoms, as the tumor progresses, include headache, nausea and vomiting, visual changes, confusion, memory loss, personality changes, balance problems and dizziness.

It is common to completely remove the primary tumor only to see it recur a few months later. Gliomas (including GBM) are infiltrative tumors, meaning that they can never have truly clear margins after surgical removal.

Glial cells are the support cells of the nervous system, and they are everywhere, spreading their tentacles deep into brain tissue. When glial cells become malignant, it is almost impossible to get rid of the entire malignancy.

The awful symptoms, and the poor prognosis despite treatment – and the stoicism and moral strength and courage in the face of these harsh realities – are what characterized McCain’s response to his brain tumor. The senator showed the same kind of courage he displayed in North Vietnam while being tortured as a prisoner of war.

There may be some hope on the horizon for this dismal disease. Though early clinical trials on immunotherapy and vaccines targeting certain proteins were promising, later stage trials have not confirmed these results. Other therapies, including electrical treatments, have shown limited success.

I expect that in the future, a more effective approach will involve extensive gene tumor mapping combined with a personalized immunological engineering (where your immune cells are removed and bio-engineered to fight the tumor) or where the harmful mutations in the tumor are edited out.

Also promising are the latest brain imaging techniques that go beyond simple MRIs to sense chemical activity or map the biologic signature of the tumor cells as they extend further into the brain.

Of course, finding a tumor is not the same thing as curing it, even though it is a step in the right direction.

In the meantime, the world of medicine had too little to offer a heroic warrior like John McCain, beyond our prayers and acknowledgment that he was being realistic. He is in God’s hands now, as he always was.

Medical science may one day catch up with GBM Grade 4, but it hasn’t yet.

Just as McCain supported a “surge” of U.S. troops to fight in Iraq, it’s time now for a “surge” of federal funding for increased cancer research.