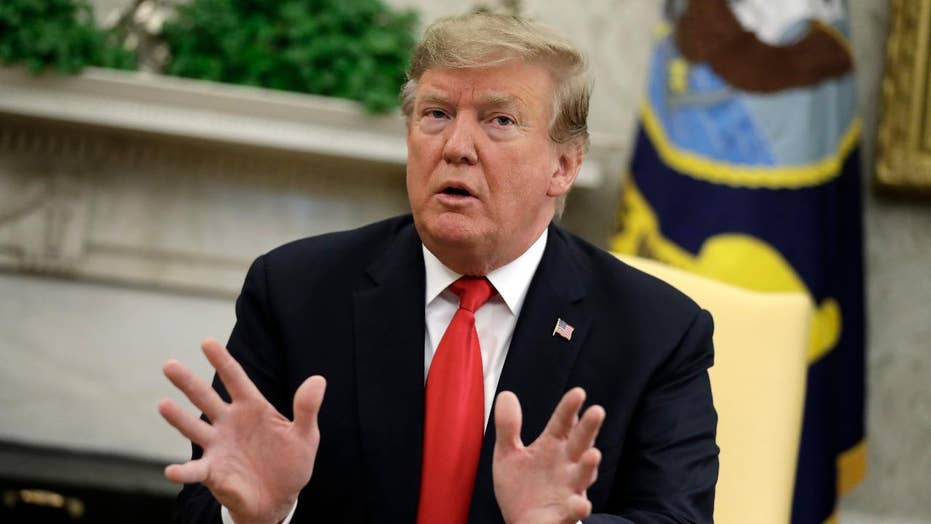 Senate Majority Leader Mitch McConnell tells reporters that he and the president are back on the same page; chief congressional correspondent Mike Emanuel reports from Capitol Hill.

President Trump has done a tremendous favor for Democrats by calling for the complete repeal of the Affordable Care Act after the 2020 elections. Repeal is unpopular with voters and gives millions of them a reason to cast ballots for Democratic candidates for president and the House and Senate next year in order to preserve the ACA.

Positioning themselves as defenders of the ACA, House Democrats voted Wednesday for a resolution asking the Justice Department to cease its efforts in court to overturn the ACA. Eight Republicans joined Democrats in the 240-186 vote.

WHY TRUMP ABANDONED HIS PLAN TO REPLACE OBAMACARE

In a statement after the vote, House Speaker Nancy Pelosi, D-Calif., said: “Once again, House Republicans have shown that they are full accomplices in President Trump’s campaign to destroy protections for people with pre-existing conditions and take away Americans’ health care. House Democrats will fight relentlessly in court and in the Congress to protect and strengthen these lifesaving protections from the GOP’s attacks.”

President Trump has done a monumental flip-flop on his position of the ACA, also known as ObamaCare, in just the past few days.

President Trump has done a monumental flip-flop on his position of the ACA, also known as ObamaCare, in just the past few days.

Last week the president said he wants to eliminate the ACA in its entirety. In a two-sentence letter, Attorney General William Barr said the Justice Department would seek a complete invalidation of the ACA, supporting a ruling by a federal judge in Texas that the law is unconstitutional.

Trump administration officials said the president would move forward quickly to seek an end to ObamaCare. And while the president promised a much better health care law to replace the ACA, it’s apparent that legislation to create this better system does not exist. In fact, Republicans have been promising to come up with a better replacement for the ACA since it was signed into law by President Obama in 2010, but have failed to deliver.

President Trump’s stunning decision to go through the courts to invalidate ObamaCare received a tremendous amount of blowback from Democrats and Republicans alike. His decision represented a major departure from the Republicans’ argument last year that only some components of the law – but not all of it – should be scrapped.

In the face of a warning from Senate Majority Leader Mitch McConnell, R-Ky., that the Republican-led Senate would not confront health care in a comprehensive way before the 2020 elections, President Trump this week walked back his plans for an immediate repeal and replacement for ObamaCare. Instead, he said he will now only do so if he wins a second term.

Ultimately, it is clear where President Trump’s main focus lies. He is still committed to pursuing the repeal and replacement of the Affordable Care Act, despite both the significant criticism that he and Republicans faced in the past, as well as the fact that at least half of Americans are satisfied with the ACA.

Bearing in mind the political ramifications that Republicans faced after their first failed attempt to roll back the health care law, McConnell’s latest pushback against the president’s brash decision is hardly surprising. In fact, many attribute the Democrats’ recapturing of the House in last November’s midterm election to the Republicans’ unsuccessful attempt to repeal the ACA.

Exit polls from the midterms show that health care was the top issue for most voters. Those who listed health care as their most important issue trusted Democrats more than Republicans.

In fact, more Americans support the Affordable Care Act now than in October 2018, weeks before the midterms. According to a Kaiser Family Foundation tracking poll, net support for the ACA has increased from plus-7% to plus-11% since the midterm elections.

Though the ACA is emblematic of President Obama and governmental overreach for President Trump and many Republicans, the law is clearly popular among voters. This is because eliminating ObamaCare could directly harm a large chunk of the U.S. population – and could motivate many people to vote for Democrats in 2020 in their own self-interest.

For example, according to The New York Times, if the ACA suddenly was no longer in force:

1)  Some 21 million Americans could lose their health insurance.

3 ) About 171 million Americans would no longer be protected by limits on how much they would be required to pay for expensive medical treatments in a year or over their lifetimes. The caps in the ACA protect people who would otherwise have to pay huge out-of-pocket costs for things like cancer treatment.

4) Some 60 million Americans on Medicare would have to pay higher costs for some medical care and some prescription drugs. Health insurance premiums could rise for as many as 55 million people on Medicare.

5) About 2 million people in their early 20s now covered under their parents’ health insurance plans could lose coverage.

Ultimately, Democrats now have a golden opportunity heading into 2020 to paint President Trump as someone who cannot be taken be taken at his word on health care, and who would dismantle the comprehensive policies with the ACA’s 10 essential benefits that millions of Americans now are very satisfied with and rely on.

Moreover, Democrats now have the chance to seize on the president’s latest backtrack and reignite a push to strengthen the ACA, solidifying their position as the party of health care.

In fact, Democrats are already taking steps to strengthen ObamaCare. One day after the Justice Department’s announcement, Democrats released their own piece of legislation. The bill contains incremental changes to the health care system, but wisely stops short of taking dramatic action like creating a single-payer “Medicare-for-all” system.

The bill expands federal health insurance subsidies available under the ACA, creates a reinsurance plan to help curb premium increases by insurers, and closes loopholes that allow states to undermine the ACA.

Strengthening the Affordable Care Act is precisely the type of change that Democrats should be championing in the year leading up to the election. That’s because a large majority of Americans favor incremental changes to our health care system, as opposed to a dramatic overhaul of the system such as the “Medicare-for-all” plan championed by some Democratic presidential contenders.

Indeed, the compromise is clear: the solution to better health care in the United States is to strengthen our existing system. We should keep the ACA in place, while still preserving private insurance and options to let people keep their own doctors.

The Democrats are on the right track with their new legislation, and now one would hope that Republicans would collaborate to ensure that a reasonable compromise is reached.

Ultimately, it is clear that health care will be at the forefront of the 2020 election campaign. President Trump has essentially handed the Democrats an opportunity to capitalize on this issue.

The president’s determination to get rid of the Affordable Care Act is not in our nation’s best interest or in his own political interest and that of the Republican Party.

I urge the president to put his extreme rhetoric about the repeal and replace of ObamaCare aside and focus on legislative achievements that are not largely an attempt to squander the legacy of his predecessor.