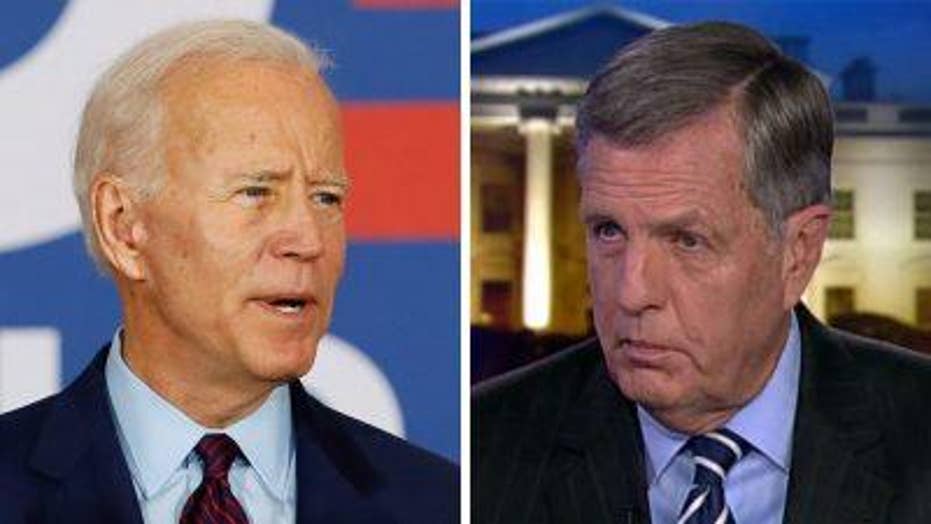 The race for the Democratic nomination for president is getting less crowded, and that’s a good thing for the party. In order to defeat President Trump in 2020 Democrats will need to unite around one cohesive narrative and eventually one candidate, and declare a truce in the intraparty feud between progressives and moderates.

The nomination contest started with over 20 candidates – more than the average voter could possibly keep up with, and more than the news media could report on in-depth.

When the next Democratic presidential candidate debate is held Sept. 12 there will be only 10 candidates on the stage on one night – unlike the previous two televised debates, which were two-night events with 10 candidates each.

KARL ROVE: JOE BIDEN THE SUBJECT OF 'TENSION' INSIDE THE DEMOCRATIC PARTY

Understandably, the candidates disqualified from the upcoming debate are upset. But the DNC qualifying criteria are reasonable.

To qualify for the debate, candidates had to receive 2 percent or higher support in at least four designated polls of Democratic voters that are either national or in the states with the first nominating contests – Iowa, New Hampshire, South Carolina and Nevada. In addition, candidates had to get campaign contributions from at least 130,000 donors, including 400 donors in each of at least 20 states.

The same criteria will be in effect for the next candidate debate Oct. 15, so some candidates kept off the stage this month could make it on next month.

One notable result of the smaller field appearing on one night will be that Biden will at last share the stage with Warren – his fiercest progressive contender.

A narrowed field will help to eliminate the noise and confusion that voters inevitably face when dealing with a large primary field, and will finally allow for the top candidates to have an open dialogue that is digestible to voters.

One notable result of the smaller field appearing on one night will be that Biden will at last share the stage with Warren – his fiercest progressive contender. She has surged in recent polls and is arguably Biden’s biggest competition next to Sanders.

Biden now has the challenge of holding his own against Warren, who has been able to garner a surge of growing support that has outpaced any other candidate – including Biden himself, whose support has largely plateaued.

The RealClear Politics average, which is comprised of eight different polls over the course of the last two weeks, indicates that Biden still has a commanding 11-point lead, polling at an average of 29 percent.

The same RealClear Politics average has Sanders polling at 17 percent – and most notably, has Warren just shy of that 16.5 percent – a statistical tie with Sanders. That’s a big jump from Warren’s 9 percent at the beginning of the summer.

Though Biden continues to hold his front-runner position, the former vice president’s support in polls has largely leveled off in the high 20’s. Moreover, it is clear that Biden’s consistent lead is in large part due to the fact that Warren and Sanders divide the second- and third-place support, with Warren slightly behind Sanders in some polls, though ahead in others.

At this early point in the race, the only other candidate outside of the top-three that appears to be within striking distance of the presidential nomination is Buttigieg, due to his strong fundraising.

Though a few other candidates – such as Harris – previously experienced subtle surges as a result of a debate performance, Harris’ increase and others like it have largely dissipated. The majority of candidates remain in the same polling position they were in months ago, which for many candidates means polling consistently at around 1 percent.

This combination of unmovably low polling numbers and the DNC’s stringent debate requirements have led a number of candidates to drop out recently, most notably Senator Kirsten Gillibrand of New York, who bowed out of the race last week.

Other Democratic dropouts include Rep. Seth Moulton of Massachusetts, former Gov. John Hickenlooper of Colorado, Gov. Jay Inslee of Washington and Rep. Eric Swalwell of California. They deserve credit for stepping aside for the good of the Democratic Party once they concluded the presidential nomination was out of their reach.

Gillibrand’s decision was largely driven by her failure to meet the DNC’s polling and donor threshold to qualify for third Democratic debate. Indeed, CNN reported that a top Gillibrand aide cited not qualifying for the third debate as the determining factor in the senator’s decision.

While Gillibrand’s withdrawal from the race will likely not impact polls in a very substantive way given her consistently low polling numbers, in the coming months it is likely that other candidates who are not in the top tier will follow suit as money runs out and voter support narrows to just the top tier.

The impact that this will have on the field is unclear, though it could spell trouble for Biden, who has struggled with a lack of enthusiasm surrounding his campaign compared to Warren. Her campaign has gained significant traction this summer and has demonstrated the potential to pick up the supporters of candidates dropping out of the race.

To be sure, I am a believer in the Democratic primary process, and understand how critical competing ideas and challenging the status quo are in a democracy.

But the DNC’s more stringent debate requirements are a step in the right direction, though there is no indication that this slowly narrowing field will prevent the possibility of a long, bruising fight for the nomination – especially given the current dynamic of competition between Biden, Warren and Sanders.

We can expect this bitter feud between the top-tier candidates to take greater shape during the Sept. 12 debate. The face-off could either result in more chaos within the Democratic Party, could narrow the field further, or could even solidify support behind a clear front-runner.