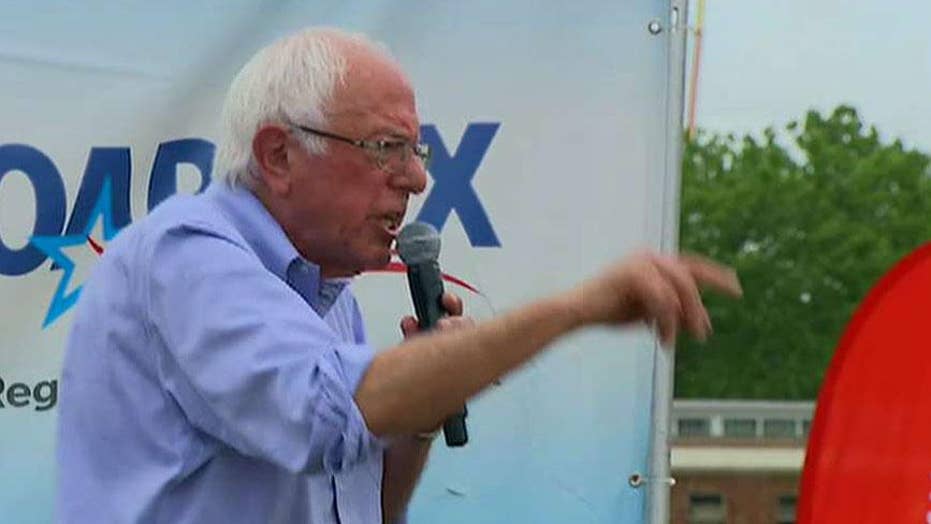 Fear not America, Bernie Sanders will not become our 46th president.

Admittedly, the socialist senator from Vermont – who wants to overthrow our capitalist system that has created untold wealth, extended opportunity to all and is the envy of the world – is again outperforming expectations.

As in 2016, Sanders is going to scare Democrats silly before the campaign season comes to a close. But he will not be the candidate in 2020 to go up against President Trump.

For sure, Sanders’ enduring popularity is one of the crazier aspects of the Democratic 2020 primary contest. He continues to be a top contender, consistently polling in second or third place behind former Vice President Joe Biden and neck-and-neck with Sen. Elizabeth Warren, D-Mass.

To remind: this is Bernie Sanders, a white septuagenarian senator from a tiny state, about whom the country heard next to nothing during his first 25 years in Congress.

Sanders’ time as a representative and then senator was belittled by (among others) former Rep. Barney Frank, D-Mass., a long-time colleague and a staunch liberal, who said in 2016: “His legislative record was to state the ideological position he took on the left, but with the exception of a few small things, he never got anything done.”

Sanders is not, and never has been, a registered Democrat.

What gives the socialist senator’s candidacy such legs?

Sanders’ major problem, ironically, is that he has been too successful. He has pushed his party far left, right into his strike zone.

First, there is Bernie’s Army, made up of true believers who rallied for Sanders in 2016 and are still angry – convinced that he was cheated out of the nomination by the Democratic National Committee.

They blame the DNC for scheduling fewer debates than Republicans in order to protect Hillary Clinton and also for holding those encounters on nights when TV audiences were expected to be small.

Second, there are “low information” voters who aren’t paying close attention to the presidential race at this early stage, but who are familiar with Sanders from his 2016 run and who like the sound of free stuff.

This was the takeaway from an NBC News poll taken last spring, which revealed that "The less you are paying attention, the more likely you are a Bernie Sanders supporter," as Chuck Todd told his Sunday panel on “Meet the Press” on NBC while releasing the survey outcome.

Third, there are voters who admire Sanders’ dogged attacks on corporate greed and our criminal justice system and who appreciate that he has dragged Democrats to the left.

Sure, Elizabeth Warren and Sen. Kamala Harris, D-Calif., and others rail about income inequality and call for higher taxes, but Sanders was there first.

Sanders was also the first to advocate for “Medicare-for-all,” a $15 per hour minimum wage, and free public college tuition. He continues to push the socialist agenda, with no apologies.

Fourth, even his opponents admire Sanders’ authenticity, a quality that cannot be faked. Sanders is consistently angry, consistently on the attack. He rarely tempers his message to appease disaffected groups.

Sander’s consistency distinguishes him from other presidential contenders, such as Harris, whose flexibility on “Medicare-for-all” would make a contortionist envious.

Despite these favorable winds at his back, Sanders will not win the Democratic presidential nomination. Though he is currently duking it out with Warren for second place behind Biden, Sanders’ grip on that top-tier standing will slip.

Ultimately, Warren, who has a broader and more comprehensive policy platform, will capture the progressive vote, while Harris will cut into Sanders’ popularity with young black voters. Also, Sanders will struggle to win over new supporters.

Biden currently leads Sanders nationally 41 to 20 with black voters, who constitute one-quarter of the Democratic constituency.

But Harris is cutting into Sanders’ turf. After the first primary debate, in which Harris challenged Biden’s record on school busing to integrate schools, her share of black millennials rose 5 points, while Biden lost 2 points and Sanders held steady.

Of course, Sanders and Harris are both disadvantaged by the relatively low turnout histories of young voters.

Similarly, while earlier polls showed Biden and Sanders way ahead in South Carolina, where two-thirds of Democratic voters are black, both Harris and Warren are making inroads.

A recent Monmouth University poll showed 12 percent of voters in the state naming Harris as their top pick, ahead of 10 percent choosing Sanders.

Meanwhile, a poll conducted by the Post and Courier newspaper in South Carolina put Warren slightly ahead of Sanders, but both still trail Biden.

These trends suggest that going into the campaign, Sanders’ name recognition was an important attribute – but one that will fade as voters got to know others in the race.

To compete, Sanders must broaden his base. Unhappily for the Vermont socialist, his popularity is sliding.

According to Gallup, Sanders’ approval rating between August 2017 and today has dropped from 56 to 41 percent; as significant, the number of respondents who disapprove of Sanders has climbed over those months from 35 percent to 43 percent.

Sanders’ major problem, ironically, is that he has been too successful. He has pushed his party far left, right into his strike zone.

Warren and others have breached Sanders’ policy ramparts and gone beyond. They have out-radicalized him, advocating wealth taxes and Green New Deals and many other progressive programs, producing a veritable smorgasbord, while Sanders is still pushing the blue plate special.

Most importantly, Democrats want to win in 2020. They know that Americans are wary of socialism. According to a recent Washington Post/ABC poll, registered voters asked to choose between President Trump and a Democrat who they considered a socialist picked Trump 49 to 43 percent.

Two-thirds of those respondents identified themselves as a Democrats or independents; only 23 percent said they were Republicans.

That sentiment should doom both Sanders and Warren. For the sake of the country, and all those who want a bite of the golden apple, let’s hope it does.