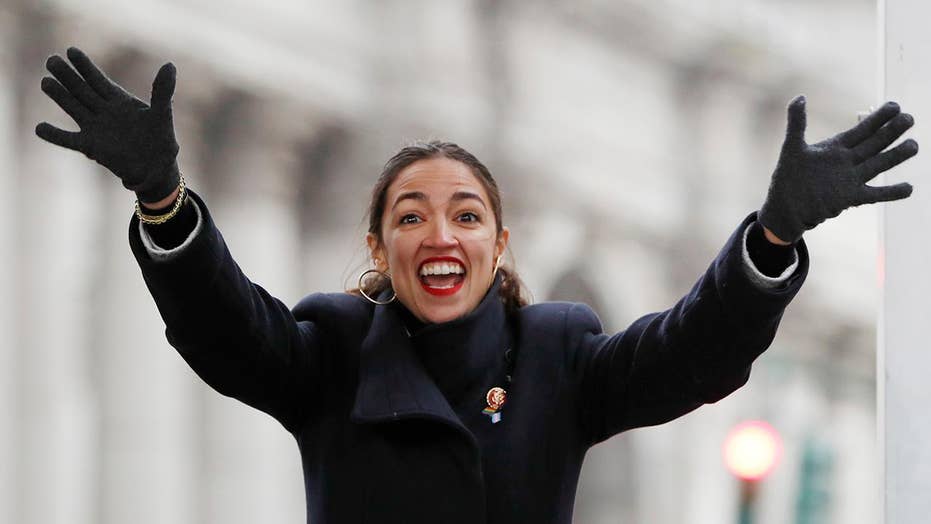 Rep. Alexandria Ocasio-Cortez has become, in essence, the new leader of the Democratic Party. The avowed socialist from the Bronx, New York, is now a one-woman Democratic National Committee.

Despite having served in office for less than a month, she is now the pace car for the Democrats’ turbocharged race to the far left. If AOC says it, many Democrats adopt it as their new gospel.

Nine months ago, “Abolish ICE!” was an exotic, extremist idea. But then AOC stunned the Democratic establishment by beating 11-term Rep. Joe Crowley, D-N.Y., in their June 26 primary and winning her heavily Democratic district last November.

AOC called for scrapping Immigration and Customs Enforcement. Other politicians on the left – no less than Sen. Kirsten Gillibrand, D-N.Y., swiftly leapt aboard AOC’s abolish-ICE express. This is now a mainstream Democratic position.

AOC campaigned on and promises Medicare-for-All. Among other things, if you like your health plan, you will lose your health plan. Period. Medicare-for-All would vacuum private insurance into Uncle Sam’s newfangled universal health care system. And George Mason University’s Mercatus Center estimates that it will cost taxpayers $32.6 trillion over 10 years.

But what AOC wants, AOC gets. So the House Budget and Rules Committees will explore Medicare-for-All in depth.

“House Democrats would not be holding hearings,” Splinter.com’s Libby Watson explained, “without outside pressure from Medicare for All proponents and the constituencies of popular leftists like Alexandria Ocasio-Cortez and Bernie Sanders.”

Last Nov. 13, AOC said during a sit-in outside the Capitol Hill office of now-House Speaker Nancy Pelosi, D-Calif.: “We need to tell her that we’ve got her back in showing and pursuing the most progressive energy agenda that this country has ever seen.”

The next day, the top Democrats on the House committees on Energy and Commerce; Natural Resources; and Science, Space and Technology announced plans to “work closely together to aggressively assess the public health, economic and environmental impacts of climate change and to explore the best solutions to combat this challenge.”

AOC shares one trait with Trump: an impressive ability to keep the news cameras pointed her way. She is the most visible House freshman in memory – and sustainably so.

AOC has promoted a resolution to create a House select committee on the Green New Deal. According to The New Yorker, more than 40 Democratic House members backed AOC’s measure.

Pelosi then tapped Rep. Kathy Castor, D-Fla., to chair a new Select Committee on the Climate Crisis. “This will be a committee clearly in the spirit of the Green New Deal,” Castor told The Hill newspaper.

None of these House Democrats seems concerned about this proposal’s breathtaking eco-overreach.

“This is going to be the Great Society, the moonshot, the civil rights movement of our generation. That is the scale of the ambition that this movement is going to require,” AOC declared last month. “We can use the transition to 100 percent renewable energy as the vehicle to truly deliver and establish economic, social, and racial justice in the United States of America.”

AOC even has senators following her lead. “Kamala Harris endorses Ocasio-Cortez’s ‘Green New Deal,’” read a Monday night headline in The Hill. "I support a Green New Deal," the California Democrat and presidential contender said at a CNN town hall in Iowa.

Sen. Elizabeth Warren, D-Mass., “supports the idea of a Green New Deal to ambitiously tackle our climate crisis, economic inequality, and racial injustice," according to an aide.

It’s amazing to see the entire Democratic Party fall under the hypnotic spell of a 29-year-old with a three-week-long record of public service.

And it’s remarkable that 74 percent of Democrats in a Jan. 18 Axios/Survey Monkey poll would consider supporting AOC for president, although she is six years too young to be eligible to serve.

Perhaps five years ago, and certainly 10, the idea of a full-blown socialist sitting in the Oval Office was a non-starter, even among Democrats. The fact that the tables have turned so completely reflects at least three factors:

First, the Sanders Effect. Democratic Socialist Sen. Bernie Sanders of Vermont performed surprisingly well against Hillary Clinton in the 2016 Democratic presidential primaries. Sanders might have fared even better if America’s biggest grifter had not climbed to the nomination with her heels in his back. While Sanders wasn’t the Democrats’ 2016 standard bearer, he can luxuriate in the fact that sending a socialist to the White House no longer terrifies Democrats.

Second, the Obama Effect. The Oval Office’s previous occupant massively swelled the scope, reach and cost of government – from ObamaCare to food stamp expansion to ice-hardness regulations. The result was eight years of stagnation and misery. But some people love “free” stuff and making “the evil 1 percent” pay for it. For them, voting socialist is their favorite indoor activity.

Third, the Trump Effect. Most Democrats hate President Trump with a trembling rage. AOC is the un-Trump: a 20-something, female bartender turned left-wing heroine confronting a 70-something, male billionaire turned right-wing hero. Democrats can’t stand him, so they root for her.

AOC shares one trait with Trump: an impressive ability to keep the news cameras pointed her way. She is the most visible House freshman in memory – and sustainably so. Alas, her ability to generate nonstop coverage highlights some of her more jaw-dropping positions.

Observers were amazed to hear her declare at a Martin Luther King Day event: “The world is gonna end in 12 years, if we don’t address climate change.”

So if AOC becomes president after Trump is re-elected, it would be curtains for this planet before she would complete her second term. If that’s so, one wonders, why bother to run?

AOC’s hyperbole is very much in line with previous, hysterical predictions of so-called global-warming-related catastrophes that never materialized.

• In “The Inconvenient Truth,” former Democratic Vice President Al Gore’s Academy Award-winning PowerPoint presentation, Gore predicted in 2006 that “global warming” would cause sea levels to rise 20 feet. No such sea rise has been detected.

AOC has glamour, attention and sound bites to spare. As alien as socialism is to the U.S., there is something “only in America” about what she has achieved: Alexandria Ocasio-Cortez is not even 30, and yet she is the tail wagging the entire donkey.