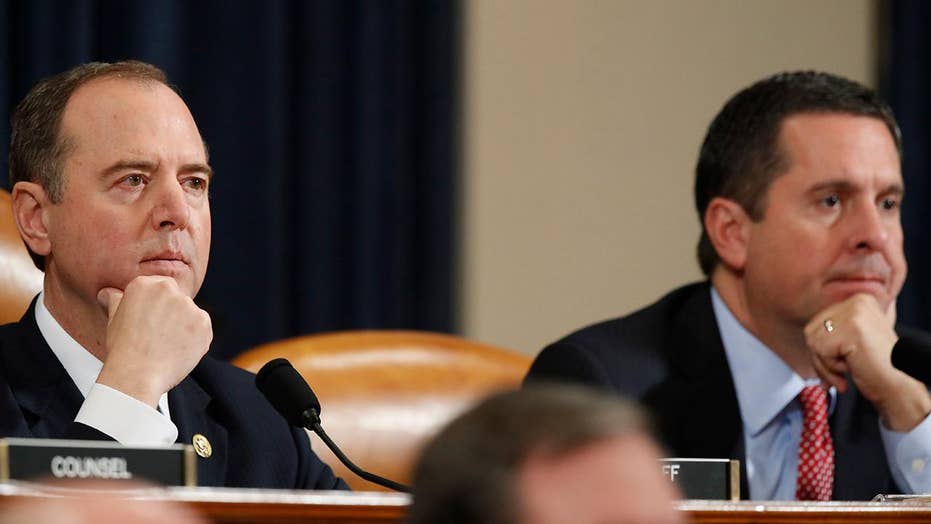 The supposedly devastating case for the impeachment of President Trump that partisan Democrats have been hyping in endless media interviews began falling apart Wednesday as the House Intelligence Committee opened its televised witch hunt against the president.

Desperate Democrats know they have no chance of removing President Trump in a trial in the Republican-controlled Senate. But they are determined to use their House majority to impeach him and send their ridiculous case against him to the Senate for a pointless trial for one reason only: to hurt his reelection chances.

This is what the whole disgraceful publicity stunt Democrats are calling an impeachment inquiry is all about – pure politics and nothing else.

Absurdly, these hearings were sparked by a routine phone call between President Trump and President Volodymyr Zelensky of Ukraine.

A so-called whistleblower hiding behind a cloak of anonymity started this whole costly and time-wasting nonsensical impeachment process. It will ultimately collapse – but not until Democrats have days of free TV time to level their baseless charges against the duly elected president of the United States.

Intelligence Committee Chairman Adam Schiff, D-Calif., chose to kick-off his exercise in Trump-bashing with the public testimony of Taylor and Kent – despite the fact they were not even on July 25 Trump-Zelensky phone call and therefore have no firsthand knowledge of what was discussed.

In fact, Schiff’s star witness – Ambassador Taylor – testified that in three meetings with President Zelensky, the issue of “linkage” never came up. This involved a supposed quid pro quo under which Ukraine would only be able to get U.S. foreign aid if it investigated the role of the nation’s previous government in helping Hillary Clinton during the 2016 election, along with what appear to be blatantly corrupt activities by former Vice President Joe Biden and his son Hunter in Ukraine.

The truth is that everything Taylor claims he knows about the facts of the case is based on hearsay. Rep. Mike Turner, R-Ohio, was right when he stated at the hearing Wednesday that hearsay very often turns out to be untrue.

Furthermore, Kent testified in his deposition that he’d “never in 27 years been on a call made by a president of the United States” and he had “no knowledge of the specifics of the call record” between Presidents Trump and Zelensky.

One person who was on the call – President Zelensky – has stated repeatedly that there was no pressure from President Trump and nothing inappropriate was discussed on the call.

Jordan rebuffed Taylor’s hearsay-inspired testimony by showing him a sworn declaration from another impeachment witness – U.S. Ambassador to the European Union Gordon Sondland – that was about as clear as mud.

Jordan described the perplexing statement in epic fashion:  “We got six people taking about four conversations in one sentence and you just told me this is where you got your clear understanding?”

This exchange led by the highly effective Jordan was the highlight of Wednesday’s questioning. The fact that Democrats are relying on indecipherable testimony such as this is exactly why their case is collapsing.

Democratic impeachment addicts in the House have a fundamental problem that is insurmountable. There was no quid pro quo with Ukraine; there was no abuse of power and there was no “extortion scheme” because Ukraine received the U.S. foreign aid without initiating any investigation.

The big takeaway from the opening impeachment hearing is that Schiff – the ringleader of the Democrat coup attempt against President Trump – has a Clinton problem. He’s a liar who suffers from Trump Derangement Syndrome. Schiff will never build public support for his pathetic impeachment theory with the American people because he has no credibility and no evidence.

Not to mention, some news organizations and social media have identified a person they claim to be the whistleblower for weeks. The idea that Schiff is oblivious to all of this is not possible.

Secondly, Schiff lied about President Trump’s call with Zelensky during an earlier congressional proceeding. The Democratic congressman falsified the transcript of the Trump-Zelensky call at a public hearing for political purposes. Schiff doctored what was said on the call because the call itself was routine and undramatic.

Next, Schiff lied about his staff’s contact with the anonymous whistleblower. Why did he lie?  Because Schiff doesn’t want the whistleblower’s complaint to appear concocted or politically inspired.

As it turns out, Schiff’s staff was in contact with the whistleblower in the lead-up to the complaint being filed because this entire circus is an orchestrated conspiracy to overturn the results of the 2016 election and nullify the votes of 63 million Americans who cast ballots for Donald Trump.

After that, Schiff lied about allowing the whistleblower to testify. At some point Schiff came to the conclusion that the whistleblower’s alleged political bias is too big a risk and his testimony to the committee would destroy the already flimsy case the Democrats have put together.

In light of this suspicious change in direction, shouldn’t Intelligence Community Inspector General Michael Atkinson answer questions about why he disregarded the whistleblower’s reported political bias and pushed ahead with sending the complaint to Congress as a matter of urgent concern?

The American people have a right to know why Schiff no longer thinks the whistleblower’s testimony is important, even though Atkinson believed the information he possessed was of urgent concern.

Schiff also lied about conducting the impeachment inquiry in a fair and impartial manner. If Schiff was interested in fairness in his crazed pursuit to impeach President Trump for trying to root out Biden-related corruption in Ukraine, why won’t he allow Republicans to call the former vice president and his son to testify about what they were doing in Ukraine?

If Schiff was interested in the truth, obtaining these facts would be an essential part of the record. Schiff’s refusal to allow this testimony smacks of politics and further damages his credibility and greatly damages his case.

As the leader of the coup attempt against President Trump, Schiff is incapable of telling the truth and has no credibility. Every American should keep that in mind when this witch hunt reconvenes on Friday with Schiff again running the show.