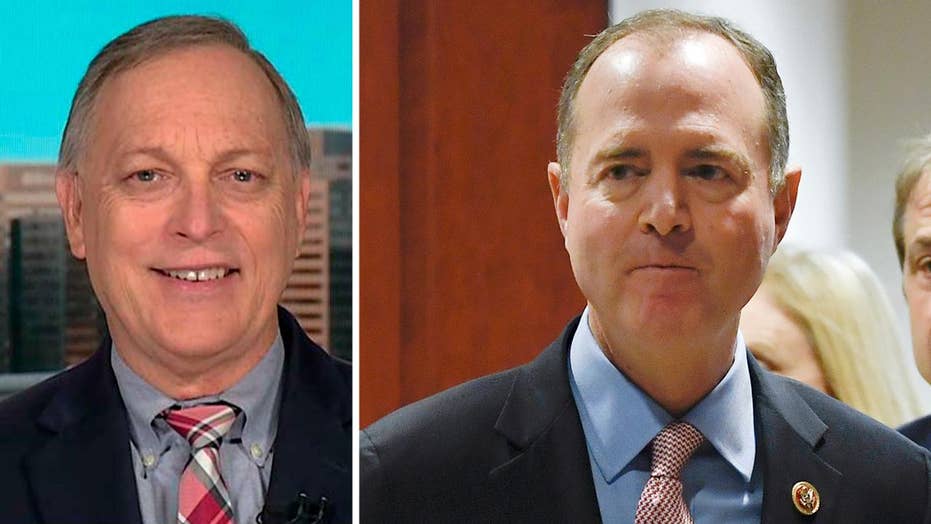 Biggs on impeachment hearings going public: The whole world will now see how Schiff is controlling everything

Republican Rep. Andy Biggs says the impeachment hearings going public will expose how unfair Democrats are being to Republicans and the American people.

The latest attempt to remove President Trump from office by Democrats rests upon the anonymous complaint of an unidentified government employee.

Having failed in their attempt to tarnish him after their bogus Russian witch hunt (hoax), they wanted desperately to find a catalyst to continue stalking the president.

Initially, House Intelligence Committee Chairman Adam Schiff agreed that the “whistleblower” would testify before Congress. But, that was before the chairman was outed as having misled the American public on whether he or his staff had any contact with the “whistleblower” – by the New York Times, no less.

Once it was revealed that Schiff and his staff met with the leaker almost one month before the disclosure of the latest allegation by the Democrats against Trump, Schiff decided that we must “protect the identity of the whistleblower.”

Based on the whistleblower complaint, Schiff publicly asserted that President Trump threatened Ukrainian President Volodymyr Zelensky eight times. The complaint revitalized Schiff’s obsession with impeaching President Trump that had been deflated after the Mueller investigation found that the Trump campaign did not collude, conspire, coordinate, and cooperate with the Russians in the 2016 election.

But, the new narrative of Schiff went up in smoke when the transcript of the phone call between the two presidents was released to the public. Uh oh. Schiff’s public prevarication was now revealed to the world!

There is no reason to withhold the identity of the purported “whistleblower” because this leaker is not really a “whistleblower.” He has no firsthand information. He isn’t a typical witness -- he is merely a gossip.

Once Schiff’s dissembling about the content of the whistleblower complaint was public knowledge, he reversed his position on putting the leaker on the witness stand.

It is important that members of Congress have the opportunity to question the witness that is the catalyst for the latest attempt to impeach on the part of the Democrats. This witness, known only as the “whistleblower,” averred in his complaint certain facts that have been relied on by the Democrats in their attack on the president.

But, what did this witness personally know? Who were his sources? Were security and intelligence laws violated by the “whistleblower” and those who leaked information to him? Why did he complain when those that spoke to him about the telephone call didn’t? When did he meet with the Schiff team? What were his biases against the president and what influence did his attorney, Mark Zaid – a notable Trump hater and impeachment enthusiast – have on the “whistleblower?”

There is no reason to withhold the identity of the purported “whistleblower” because this leaker is not really a “whistleblower.” He has no firsthand information. He isn’t a typical witness -- he is merely a gossip.

The whistleblower statutes were designed to protect those with credible evidence of wrongful conduct. These courageous people need protection against retaliation. This protection incentivizes people to come forward to help keep members of our government accountable to laws and to the American people.

But, the protection does not extend to those who are engaged in criminal conduct themselves. The alleged “whistleblower” is trying to use the statutes as a weapon against President Trump instead of the law’s intent to provide a shield to witnesses.

The “whistleblower” must appear and testify.