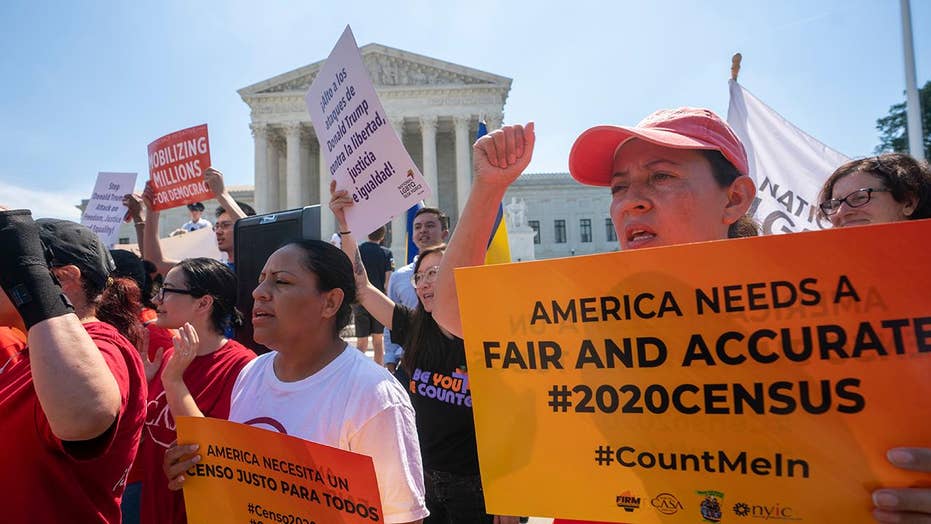 Could the 2020 census be delayed over citizenship question?

In a repeat performance of his infamous 2012 decision rescuing ObamaCare, Chief Justice John Roberts acutely disappointed conservatives Thursday by siding with the Supreme Court's liberal Justices in second-guessing the reasons for adding a citizenship question to the census and all but killing the question, given the looming deadline for printing census forms.

The citizenship question was before the Court because of lawsuits claiming, among other things, that the administration did not provide a satisfactory justification for the question and that its inclusion would lead to inaccurate census results, because immigrant households will be less likely to respond.

Never mind, as Justice Alito pointed out in a separate opinion, that the "United Nations recommends that a census inquire about citizenship, and many countries do so."

Those sympathetic to Roberts will probably see him as "balancing" the Court by siding with his conservative colleagues in the political gerrymandering cases decided Thursday, while agreeing with the liberal Justices in the census case.

They may even conclude that he took a minimalist approach by remanding the census question back to the lower courts, rather than making a final decision about it. But conservatives won't be fooled by a decision that effectively gives the president's critics exactly what they were seeking.

Those sympathetic to Roberts will probably see him as "balancing" the Court by siding with his conservative colleagues in the political gerrymandering cases decided Thursday, while agreeing with the liberal Justices in the census case.

The similarity to the 2012 ObamaCare case is both striking and telling.

Most Court watchers agree that in 2012, Roberts shied away from joining his conservative colleagues and changed his vote when the political pressure was turned up in an emotionally charged, high-profile case where he was the deciding vote. In all likelihood, a similar phenomena was at play here.

Then and now, Roberts threw conservatives a bone before ultimately disappointing them, perhaps hoping to dampen their criticism or position himself as a Solomonic compromiser.

In 2012, he ruled that ObamaCare's individual insurance mandate was not a valid exercise of the Constitution's Commerce Clause. But then he upheld the mandate as a tax, using reasoning that even ObamaCare supporters admit was a stretch. Similarly, he rejected the challengers' claim that the Constitution's census clause prohibits a citizenship question before ultimately concluding that the administration's justification for the question was pretextual.

As in 2012, the Chief Justice jumped through hoops to reach his superficial compromise. Roberts conceded that "no particular step in the [administration's decision-making] process stands out as inappropriate or defective," but nonetheless deemed the result defective.

That required "an unprecedented departure from [the Court's] deferential review of discretionary agency decisions," as Justice Thomas pointed out in an opinion joined by Justices Gorsuch and Kavanaugh. This "Court has never held an agency decision [invalid] on the ground that its supporting rationale was 'pretextual,'” Thomas added.

Consider also the contradictions between Roberts' reasoning in the census case and his views in other decisions this week.

In Thursday's political gerrymandering decision, Roberts exempted such gerrymandering from judicial review because no judicially manageable standard could be found.

In contrast, the lack of such a standard was no barrier to judicial review in the census case where, as Alito noted, neither the challengers nor the Roberts majority were "able to identify any relevant, judicially manageable limits on the [Commerce] Secretary’s decision."

"Throughout our Nation’s history, the Executive Branch has decided without judicial supervision or interference whether and, if so, in what form the decennial census should inquire about … citizenship," noted Alito. So legally, it would have been very easy for Roberts to rule in favor of the citizenship question. Politically, it's a different story.

Whatever the Chief Justices' motives might have been Thursday – I speculate here about the role that court-packing threats might have played – he surely deepened the impression on both sides of the aisle that he is the new Justice Kennedy – that is, the Court's swing vote – rather than the reliable fifth conservative vote that conservatives hope for and liberals dread.

Of equal concern to conservatives are the broad ramifications of the census decision, which will surely encourage the lower court judges who, at times, have seemed to be part of the Trump “Resistance.”

Those judges have second-guessed the president's motives and policy decisions at almost every turn, issuing a slew of injunctions that probe the administration's motives to an unprecedented degree.

"Virtually every significant agency action is vulnerable to the kinds of allegations the Court credits today," said Thomas. "It is not difficult for political opponents of executive actions to generate controversy with accusations of pretext, deceit, and illicit motives."

Is the Chief Justice himself sympathetic to the Trump “Resistance”? Some thought so when Roberts criticized the president's negative comments about “Obama judges” last November. The census decision will only add to that impression.

It's an impression that may or may not be accurate. But this much is certain: Democrats' bogeyman of a conservative majority controlling the Supreme Court will remain mythical as long as Roberts is the fifth "conservative" vote.