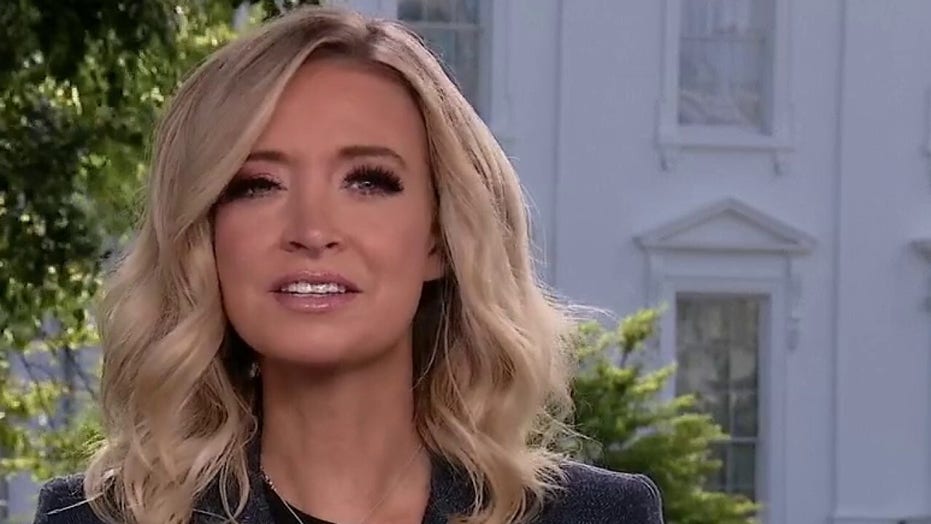 Kayleigh McEnany: Trump has no interest in China trade talks

How far will the Chinese government go to make its economy the most influential in the world? That’s a question national security experts have been discussing for years, and we now know. Based on the Chinese Communist Party’s (CCP) attempt to rewrite the history of the COVID-19 pandemic, they are willing to use aggressive disinformation to achieve their aim.

Over the past few months, the CCP has falsely claimed the source of COVID-19 was the U.S. Army and Italy. They then amplified disinformation about the U.S. response to the pandemic.

These efforts are designed to achieve three goals: Save face with a Chinese populace devastated by this deadly epidemic, distract the world from the Chinese government’s lack of transparency on the spread of COVID-19, and drive a wedge between the United States and our international allies.

JAMES CARAFANO: CORONAVIRUS AND CHINA — 3 RULES TO BUILD US UP AND MAKE THEM PAY

General Secretary Xi Jinping, though clearly concerned about his standing in the CCP given their bungled response and draconian efforts to deal with COVID-19, has recognized the opportunity to use this global crisis to supercharge the Chinese government’s stated goal to become the world’s sole superpower by 2049.

In addition to claiming COVID-19 is a bioweapon created by the U.S., the CCP is utilizing government-backed media outlets and officials to spread the narrative that China defeated the virus and is the leader in helping the rest of the world — by sharing medical expertise and providing personal protective equipment — through this global crisis.

Russia and Iran are echoing this disinformation to distract their own populations from their ineffective responses to the virus and to sow doubt in the international community about who is the more responsible global superpower: the United States or China.

Unfortunately, years of effective Chinese diplomacy and influence-peddling in Western capitals have made fighting this messaging campaign more difficult. Some of our allies have been lulled into complacency and failed to grasp the severity of the threat posed by the CCP to our economies, security and values.

America and its allies must remain the world’s centers of innovation and technological advancement, and the only way to achieve this goal is to strengthen our alliances not weaken them.

For example, European support for China’s Belt and Road Initiative (BRI), formally endorsed by more than half of the European Union’s members, has helped normalize an initiative that has left many countries trapped in debt, expanded China’s global influence and exported China’s surveillance state.

The Chinese impact on European domestic economic projects allows them to gain influence on issues of foreign policy like getting countries to block the EU from condemning the CCP’s human rights record despite indisputable evidence of the CCP’s mass imprisonment of over one million Uyghurs. However, more than 125,000 confirmed European deaths from COVID-19 may revoke the free pass Xi has been enjoying in Europe.

Many of our most important allies, such as Australia, the United Kingdom and France, have joined our calls for accountability and transparency. Our allies’ demands for more information about the origin and spread of the virus have been met by the typical CCP response of diplomatic coercion. Chinese officials even went so far as to threaten Australia with a boycott of its goods and services.

The way the United States and our allies can insulate ourselves from further damage from China is by improving economic cooperation. Given our globalized economy, fully decoupling from China would be impossible and unwise. Instead, America and its allies must remain the world’s centers of innovation and technological advancement, and the only way to achieve this goal is to strengthen our alliances not weaken them.

In our own hemisphere, the U.S. should focus on strengthening North American competitiveness through the U.S.-Mexico-Canada Agreement (USMCA) to provide an alternative to supply chains in China. Additionally, western companies, not CCP-backed ones, need to lead in the development of advanced technologies like artificial intelligence, quantum computing and 5G.

To achieve this goal Washington and our allied capitals must work together on strategies that coordinate efforts across government, academia and the private sector to advance research, development and adoption of new technologies.

The chaos and destruction brought upon our society by COVID-19 and the CCP’s lack of transparency have crystallized the thinking of many Americans on the nature of the China challenge. Nine in 10 Americans view China as a threat and 62 percent see it as a major threat.

As we try to move from the prevention, containment and mitigation stages of this global pandemic to the control and recovery phases, we can’t forget the geopolitical reality of these final two phases. If we want to not only recover but be in a better position than we were when the world started dealing with COVID-19, then the U.S. must reassert our role as the global leader and lead the world through this pandemic by strengthening our alliances.

Standing together, we can meet this challenge with renewed vigor and help create a better world after a pandemic that has taken far too many lives.

A former undercover CIA officer, entrepreneur and cybersecurity expert, Will Hurd is the U.S. Representative for the 23rd Congressional District of Texas. In Congress he serves as a member of the Appropriations Committee, and as Ranking Member of the Subcommittee on Intelligence Modernization and Readiness of the House Permanent Select Committee on Intelligence. Follow him on Twitter, @HurdOnTheHill.