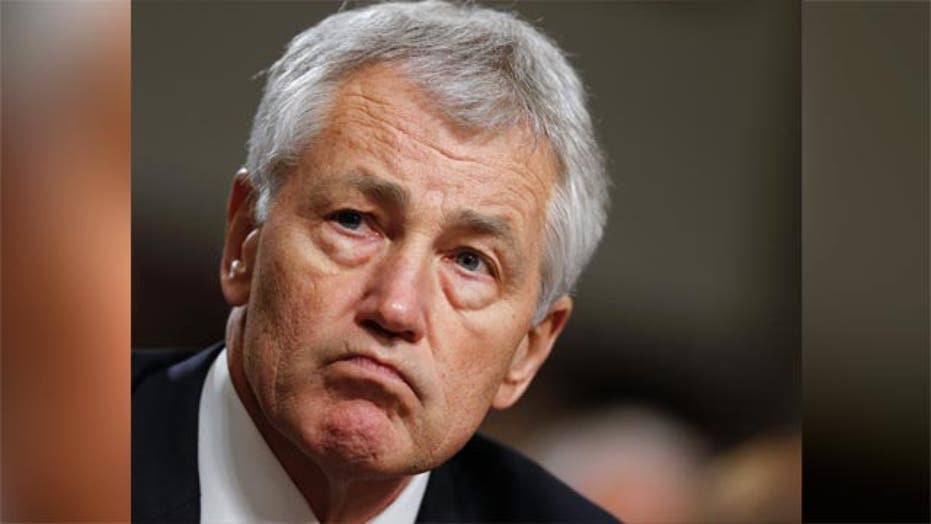 Will Republicans vote for their former colleague?

On March 2, 2007, Sen. Chuck Hagel delivered a speech at Rutgers University that has attracted more than its share of controversy. First, Hagel allegedly accused the State Department of being controlled by the Israeli Foreign Ministry in the Q&A after the speech (he disavows and does not recall those remarks). Next, the Daily Caller reported that Hagel was invited by Hooshang Amirahmadi, a candidate for the Iranian presidency approved by Iran’s radical Guardian Council.

While the source of the invitation and the allegations regarding the unrecorded question- and-answer session are certainly interesting, they’re less interesting than the text of the speech itself, which demonstrates that Hagel is simply wrong about Iran. He’s worse than wrong. To borrow a phrase from my friend Andrew McCarthy, he’s willfully blind.

In the speech, in which he supposedly demonstrates his grasp on the “complexities” of the Middle East, he says the following:

Iran has cooperated with the United States on Afghanistan to help the Afghans establish a new government after the Taliban was ousted. Iran continues to invest heavily in the reconstruction of western Afghanistan.

On Afghanistan, the United States and Iran found common interests: defeating the Taliban and Islamic radicals, stabilizing Afghanistan, stopping the opium production and the flow of opium coming into Iran. From these common interests emerged common actions working toward a common purpose.

This expression of “common interests” and cooperation is staggering – especially considering the timing. Not two months before he delivered the speech, Iran’s Quds Force, a paramilitary terrorist arm of the Iranian government, engineered a raid on an American base in Karbala, Iraq.  Four American soldiers were kidnapped and summarily and brutally executed.

In short, Hagel delivered his speech, a speech lauding Iran’s cooperation, not two months after an overt act of war against this nation. To be sure, Hagel did pay lip service to Iran’s hostile acts, saying “Iran has not helped stabilize the current chaos in Iraq and is responsible for weapons and explosives being used against U.S. and Iraqi military forces in Iraq.”  Yet this language is almost comically deceptive.

“Not helped stabilize” is dramatic understatement when Iran is responsible for launching direct attacks against American soldiers. “[R]esponsible for weapons and explosives being used” minimizes the direct supply chain set up between Iran and hostile Shiite missiles in Iraq. In fact, the single deadliest weapon against Americans in Iraq, the “explosively formed penetrator” (EFP) comes directly from Iran and was used against American troops on Iranian orders. A Feb. 16, 2007, Fox News report – two weeks before Hagel’s speech – outlines the role of the Quds Force in supplying Shiite militaries with EFPs.

But what about Afghanistan? Hagel made the claim that Iran had been helpful, as if it was compartmentalizing its attacks on Americans to one theater of operations. How breathtakingly naïve. In fact, in April 2007 – one month after Hagel’s speech – British soldiers intercepted Iranian arms shipments in Afghanistan.  As early as February 2007, al-Jazeera was reporting on the presence of EFPs in Afghanistan.

Make no mistake, Iran’s war of aggression against American soldiers continues. In 2011, just as American soldiers were preparing to leave Iraq, the Iranian Revolutionary Guard Corps supplied allied militias with new and dangerous weapons. In February of that year, British forces even intercepted an Iranian shipment of 122-mm. rockets with a range of 13 miles – rockets that would dramatically increase Taliban striking power.

In July 2011, respected Atlantic columnist Jeffrey Goldberg surveyed the evidence of Iran’s recent aggression and declared: “[This] means that Iran is waging war against the United States of America.”

Given this longstanding reality, how can Hagel possibly justify his remarks at Rutgers?  How can we trust him to join the National Command Authority and become the second-in-command of the American military? Administration efforts to minimize his policy-making role ring hollow. He will be, after all, Obama’s senior defense adviser.

Now is not the time for Republican senators to go wobbly. They can and should block the nomination of a man so willfully blind that he can’t even see Iran’s war against the U.S.