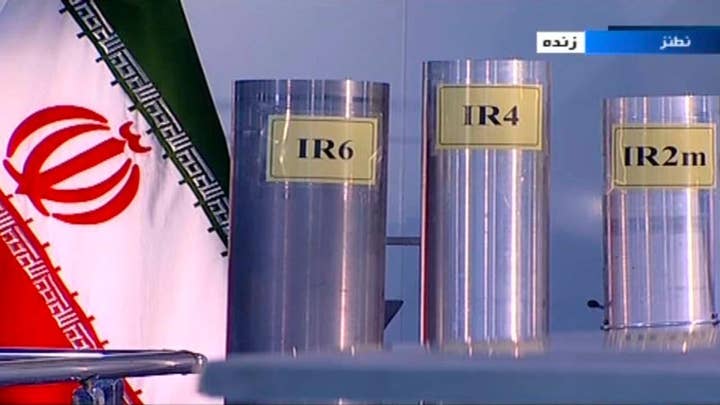 The Pentagon has released new color photos as proof that Iran was behind last week’s attack on two oil tankers in the Gulf of Oman,” ABC News reported. Hours before that attack, Iranians launched surface-to-air missile at a U.S. drone monitoring the tankers. The missile missed. In response, 1,000 American troops are being dispatched to the region for the declared purpose of defending American forces already there.

Reacting to these charges and U.S. military moves and threats, Iran has said it will resume (did it ever stop?) the enrichment of uranium by next week, which it had pledged not to do for 10 years in an agreement forged during the Obama administration.

Two Israeli newspapers — The Jerusalem Post and Maariv — cite U.N. officials as saying the Trump administration is considering "tactical" bombing of an Iranian facility linked to its nuclear program. A Western diplomat is quoted: "The bombing will be massive but will be limited to a specific target."

ROBERT MOORE: IRAN'S BELLIGERENT BEHAVIOR REMINDS US WHY CONGRESS, NOT THE PRESIDENT, HAS POWER TO DECLARE WAR

What sort of response might be expected from Iran if this happens? Will the mullahs who run the country launch a strike against Israel as they have threatened? Various Iranian religious and political leaders have viewed themselves as the midwives of Armageddon, ushering in the return of the 12th Imam and the imposition of Islamic law on the world. Are they fanatical enough to turn their theology into action that could lead to the destruction of their regime?

How far should the United States go when it comes to military force? What are the objectives? How would we respond to a counterattack from Iran?

Americans will be rightly dubious about another military engagement in the Middle East, especially after officials in this and other countries claimed there was irrefutable evidence that Iraqi dictator Saddam Hussein possessed weapons of mass destruction, which were never found.

Then there’s the unending war in Afghanistan. Following the terrorist attack on America in 2001, the public mostly approved of the Bush administration’s invasion of that country to topple the Taliban. President Obama began the withdrawal of U.S. troops and President Trump has withdrawn more, but several thousand remain, along with token numbers from allied countries. It is America’s longest war.

Afghanistan and other Middle East threats are rooted in religious belief, and it is nearly impossible to "convert" fundamentalist believers to another point of view, particularly when they regard the United States, the West and Israel as tools of Satan they are commanded by Allah to destroy.

Then there’s the question of resources. The United States is burdened with $22 trillion in debt. Democratic presidential candidates want to deepen that debt with new spending. Spending America into bankruptcy was a declared goal of Usama bin Laden.

In a 2004 interview with Al Jazeera, bin Laden said: “We are continuing this policy in bleeding America to the point of bankruptcy. Allah willing, and nothing is too great for Allah.”

The only way the Iranian leadership will be deterred is if it is replaced. Recent elections have shown that many Iranians, especially the young, want different leaders with more modern views of Islam, or even a secular state modeled after previous Turkey regimes. The religious leadership has tampered with election results and arrested, jailed and even killed protesters. They will not voluntarily give up power.

The questions then become: How far should the United States go when it comes to military force? What are the objectives? How would we respond to a counterattack from Iran? What would Iran then do? Would it not be better to covertly encourage Iranian groups that want to replace the current regime? Perhaps that is happening.

One hopes that experienced and sane heads are working this out and that President Trump will exercise sound judgment in his ultimate decision. We don’t need any more wars, because when it comes to the Middle East they never seem to end.