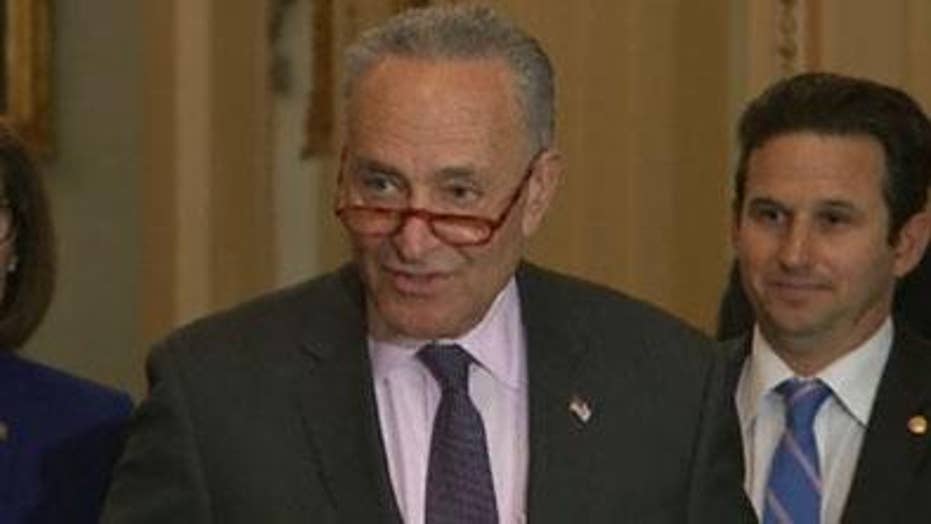 Sen. Chuck Schumer, D-N.Y., is waging a media blitz to demand that four of President Trump’s White House staff members be compelled to testify at the president’s impeachment trial in the Senate.

Schumer claims that unless that happens, the trial will be unfair. Don’t believe him. It’s a ploy to smear President Trump’s expected acquittal, leaving Trump damaged goods for the November election.

Schumer accused Senate Majority Leader Mitch McConnell, R-Ky., Friday of wanting a “mock trial” instead of real justice. This is an act by the New York senator to deceive the public. Schumer knows there is zero chance the White House witnesses he’s demanding will testify.

Close advisers to all presidents are generally protected by executive privilege. This isn’t something Trump invented. Previous presidents, from George Washington to Barack Obama, have said “no” to similar congressional requests, arguing that it is their duty to protect the presidency from congressional overreach.

House Democrats could have gone to court to get a ruling on the president’s claim of executive privilege, possibly compelling the testimony. But once the Democrats voted to impeach, they lost any chance of having federal courts order Trump’s staff testify.

The Supreme Court ruled in 1993 that the courts won’t interfere in impeachment trials, because the Senate has “the sole power” over them under the Constitution.

Now Schumer is pressing Senate Majority Leader McConnell to promise to call four White House witnesses. It’s a charade.  McConnell can’t surrender the president’s executive privilege. It’s not his to give away.

Schumer’s demand is nothing more than a public relations stunt.

Schumer is claiming emails released last week are “a game-changer.” That’s nonsense. The emails confirm that Trump put a hold on aid to Ukraine – a fact already known – but don’t indicate he did it for improper reasons.

In fact, several of the emails underscore the president’s concern about corruption in Ukraine and his legitimate concern to ensure that aid sent there would not be wasted.

House Democrats have already called 19 witnesses, and produced 8,000 pages of testimony and reports. Republicans were denied any chance to call witnesses there.

Start with the so-called “whistleblower.” He filed what is technically called a whistleblower complaint. But he had no firsthand knowledge of Trump’s July 25 phone call with the president of Ukraine or Trump’s motives.

Every charge made in the whistleblower’s complaint begins with “I learned from multiple U.S. officials,” or “multiple officials told me,” or “officials with direct knowledge informed me.” He never names any of these sources.

This person is a gossip. Real whistleblowers provide firsthand knowledge and expose dangers or abuses that would otherwise not be known.

Last week a nonprofit that promotes government transparency, Judicial Watch, sued to get the whistleblower’s emails. If they become public the truth about Schiff’s role in engineering the complaint will come out too.

What we know so far is that on July 26, one day after Trump’s controversial phone call, Schiff hired Sean Misko to join his staff. Shortly afterward, Schiff’s staff met with the whistleblower, a friend of a co-worker of Misko’s in the intelligence community. Schiff’s staff provided “guidance” to the whistleblower on how to make a complaint.

Schiff lied about these cozy dealings until The New York Times called him on it.

The whistleblower filed his complaint with Intelligence Community Inspector General Atkinson on August 12, also hiding that he had met with Schiff’s staff. When the complaint was made public in September, Schiff pretended to be surprised.

The unanswered question senators need to probe is why Atkinson deemed the complaint “credible” enough to be reported the Congress. That is what allowed Schiff to drive impeachment.

“Second-hand or unsubstantiated assertions” of wrongdoing, including accounts provided by other employees, are not enough for a whistleblower complaint to be acted on. The regulations spell that out clearly.

Yet that’s all the whistleblower had. No firsthand information. Atkinson’s Sept. 30 statement explaining why he deemed the complaint actionable is doubletalk. No real reason is given.

Atkinson testified to the House Intelligence Committee behind closed doors Oct. 4. He may have given a reason then. But Schiff still won’t release that testimony, even to House members.

The testimony of all the 18 other witnesses grilled in those closed-door meetings has been released. All except Atkinson’s. It’s a troubling omission.

What is Schiff hiding? His staff’s role in producing the whistleblower complaint and the flimsy nature of the complaint, which was certainly inadequate to begin an impeachment inquiry against the president of the United States.

The public deserves the truth.

Betsy McCaughey, Ph.D., is a former lieutenant governor of New York state and a columnist at the New York Post.
ADVERTISEMENT