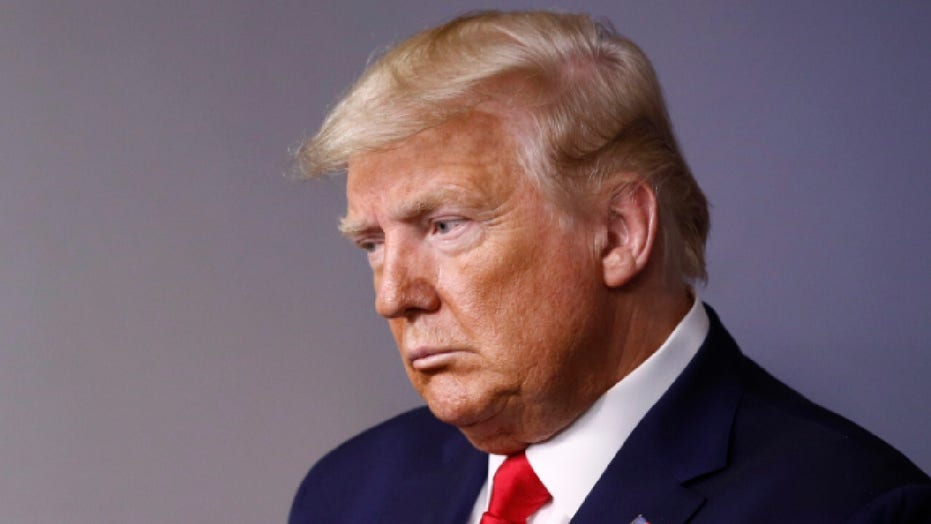 Dr. Nicole Saphire discusses the latest on COVID-19 and the White House's promise of 27 million test kits by the end of March.

President Donald Trump has called the efforts to combat COVID-19 “our big war.” He has referred to himself as a “wartime president” and of his administration’s efforts as a “war against the virus.” Last week he spoke of the virus as “an invisible enemy.”

And to provide confidence as well as calm, he has also iterated many times that this will not be forever, tweeting Monday: “We cannot let the cure be worse than the problem, at the end of the 15-day period we will make a decision as to which way we want to go.”

Still, state and local governments are also engaging with war-like statements by governors and mayors, several of whom have issued shelter-in-place orders, quarantines and travel bans. More will soon join.

REP. DAN CRENSHAW: CHINA'S CORONAVIRUS LIES PREY ON US DIVISIONS — HERE'S HOW TO FIGHT THEIR PROPAGANDA

Where businesses have not been ordered to close by governors, they have been greatly restricted. The National Guard has been mobilized and bailouts have been proposed in the trillions of dollars. Food and supplies are being both rationed and hoarded. And the president is criticized hourly for doing too much, and not enough, at the same time.

For those who did not live through World War II, this is a small window into what America looks like when it goes to war. Or is it? The word is deployed and quickly civil liberties, including travel, are being curbed while the economy is melting fast. But the U.S. military is not invading anywhere, artillery is not being fired, ordnance is not being dropped. This has all the domestic attributes of war, with much of life disrupted and an economy held in abeyance, but we know it’s not really a war. Not really. And our response is disproportionate.

Daily, the television and cable chyrons show numbers of sick and dead. Each loss is sad and horrible. In the U.S., as of this writing, those infected are 41,569, with 504 deaths. Admittedly, we don’t know the full consequences of the virus, and the smartest of analysts admit we are dealing with incomplete data. Yet more and more are beginning to question what lawyers call redressability. Is the response to the virus equal to the problem?

What, a sane society needs to ask, is the national fatality rate of the disease and what is the result of losing everything else?

We have had other non-kinetic wars before. Earlier we heard a lot about the War on Drugs, a full-scale effort that involved enforcement, prevention and treatment. Perhaps “war” was a good word, perhaps not, but the efforts were aimed at a problem that took the lives of some 870,000 Americans over the past three decades, with the U.S. congratulating itself for reducing drug deaths to 67,367 last year. In that effort against illegal drugs, we never even contemplated doing the variety of things we are doing now. Maybe there never really was a war on drugs. Certainly not like this one.

Today, to paraphrase the Manhattan Institute’s Heather Mac Donald, we have engaged in the volitional destruction of the economy and caused unbridled panic over a number we don’t know we will reach but most think will not surpass the combined annual death toll of the regular flu and annual traffic deaths, to say nothing of opioid deaths.

We are being disproportionate. The measures being undertaken now will have far-reaching and potentially disastrous consequences. We need to be attentive to isolation as potentially more dangerous than normal life, leading to more suicide, more opioid abuse and more domestic abuse – endemics we have waged other “wars” on. We will soon start to see the consequence of lost wages. And the elderly, who are most at risk for their physical health are also now most vulnerable from the economic consequences as their nest eggs and retirements evaporate.

What, a sane society needs to ask, is the national fatality rate of the disease and what is the result of losing everything else?  As of now, we believe the first number is 1.2 percent. That is, if you catch this virus and if you test positive, your odds of dying from it are 1.2 percent. And if you are under 60, much less than that. We have no idea of the results of losing everything else.

As the economist Steve Moore wrote us: “We have gone from a crisis from an act of nature to a crisis that is manmade from the stupidity of shutting down our economic engines. I don’t know how serious this virus will be but I do know if the economy stays paralyzed for another month the carnage will be in the trillions of dollars. The health impact alone from bankruptcies, unemployment and isolation could be worse than the disease.”

Rudyard Kipling warned: Don’t lose your head when all about you are losing theirs. Let’s conclude the 15-day period as the president advises. That will get us to next Monday. Then see where we are. Then maybe we can get back to normal.

Every war has its catchphrases and watchwords. Today, one important word and guidepost is missing: proportionality.

Seth Leibsohn is a senior fellow at the Claremont Institute and the host of "The Seth Leibsohn Show," heard daily on 960am/KKNT in Phoenix, Ariz.