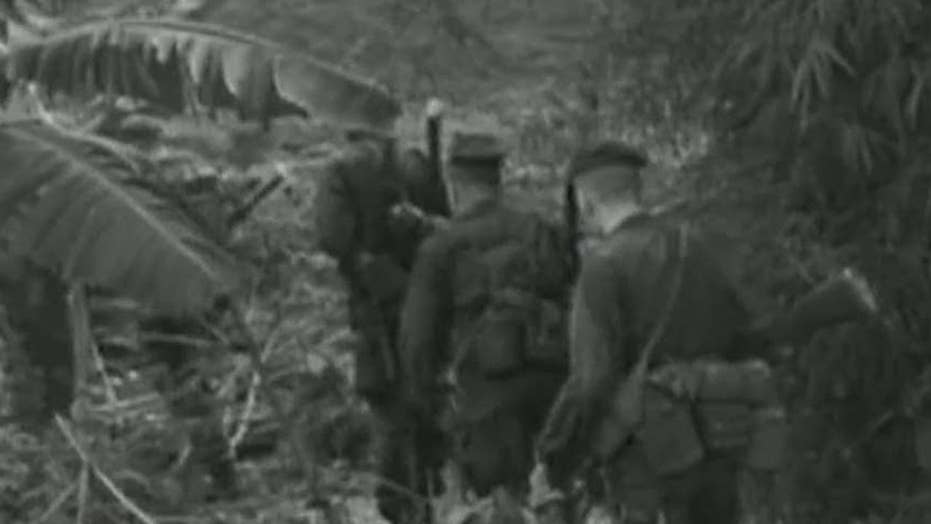 Jennifer Griffin takes us back through the history of US-Vietnam relations.

It was reported last week that Adkins, who received the Medal of Honor for his heroic actions in Vietnam, is battling COVID-19.

It is a sad irony that veterans of Vietnam, who sacrificed so much during their youth, are among those most vulnerable during this pandemic. So as we thank them for their service on a day set aside to honor them, we must do much more, remembering that it is now our collective duty to help prevent the spread of coronavirus, in many cases by simply staying home.

ALVIN TOWNLEY: LESSONS ON ENDURING CORONAVIRUS CRISIS FROM THESE HEROES OF VIETNAM

In this undated photo provided by the US Army, Army Command Sgt. Maj. Bennie G. Adkins is pictured. (AP/U.S. Army)

Though the service of these heroes often went unrecognized, the nation did give special recognition to an elite group of 263 Vietnam veterans by bestowing upon them its highest award for valor: the Medal of Honor. Among those to receive the medal was Bennie Adkins.

Today, this Special Forces veteran, who served for 22 years in the U.S. Army, faces a battle just as dangerous as the firefight he miraculously survived in March 1966. In this fight, however, he can’t see his enemy. He is fighting for his life against the coronavirus.

When I learned this rare hero was battling COVID-19, I went back and read his story of duty and sacrifice, and found some lessons and inspiration. His courage and actions from March 9-12, 1966, during the Battle of A Shau give me hope for Bennie Adkins. They remind me how much some willingly sacrifice for others.

On his second tour in South Vietnam with the 5th Special Forces Group – the famed Green Berets – Adkins' unit sustained a ferocious attack from Viet Cong guerrillas and North Vietnamese Army troops. By some estimates, the Americans were outnumbered 10 to one.

Bennie Adkins' story reminds us that we must always be willing to serve – and to do our duty.

As shells rained upon the American camp, 32-year-old Adkins raced to a mortar and returned fire. Shrapnel from enemy rounds sliced into him but he continued firing from his post, defending his men. He soon raced back through gunfire and exploding shells to drag several wounded Green Berets to temporary safety, receiving yet more wounds.

When a medevac helicopter landed outside his compound’s fence, he again braved enemy fire to rush a critically wounded soldier to a waiting corpsman. More wounds. Later a re-supply helicopter landed, and he again dashed outside the fence to retrieve the supplies despite the constant gunfire.

Twenty-four hours after its initial attack, the enemy assaulted the camp a second time. Amid shrinking numbers of fellow defenders, Adkins launched every mortar shell his unit had and then held off attackers with an anti-tank weapon. Left with only his rifle, he covered a retreat to the compound’s bunker.

As the surviving Green Berets ran low on ammunition, Adkins leaped into enemy fire yet again to retrieve more. The enemy finally overran the American base and the Green Berets dug their way out the bunker’s rear and, still under fire, escaped to the nearby landing zone. There, they heard 10 of 18 evacuation helicopters had been shot down; no more were coming.

Adkins spent the next 48 hours leading eight men – some wounded – and evading the pursuing enemy in the surrounding jungle. His pursuers shot down the first rescue helicopter. A second “Huey” finally rescued the group on March 12 and the soldiers' four-day ordeal ended at last.

Adkins' Medal of Honor citation states, "During the 38-hour battle and 48 hours of escape and evasion, fighting with mortars, machine guns, recoilless rifles, small arms and hand grenades, it was estimated that ... Adkins killed between 135 and 175 of the enemy while sustaining 18 different wounds to his body."

When Adkins was awarded the Medal of Honor in 2014, President Barack Obama told the guests attending the ceremony, "When Bennie and I met in the Oval Office, he asked if he could sign back up. His lovely wife was not amused."

Bennie Adkins' story reminds us that we must always be willing to serve – and to do our duty.