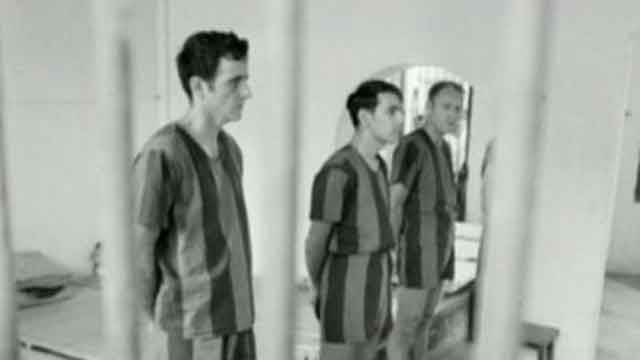 New heroes are emerging as America faces its latest crisis. Some ensure our sick receive care. Others sustain vital supply chains. Some simply wear pajamas, doing their small but important duty to combat the spread of COVID-19.

American heroes have worn pajamas before. In fact, the men I admire most did their duty by enduring isolation, communicating without speaking face-to-face, and yes, wearing pajamas – scratchy, pink-striped pajamas. Their example becomes especially important today.

During the 1960s, North Vietnamese rockets and artillery shattered the self-assumed invincibility of more than 400 U.S. military aviators who became prisoners of war in the Hanoi Hilton and other infamous camps. In a matter of seconds, their missions suddenly and unexpectedly became ones of fierce defiance, patient endurance, mutual support, and unknown duration.

These men did not take confinement well. They were used to streaking across open sky at Mach 1, making aircraft bend to their will, and always completing their mission. Like many of us, they believed they had control of their world.

In an instant, their lives irreversibly changed, much as ours have today. Inside prison camps, they chose patriotism and pain over comfort and cooperation. They refused to acquiesce to their captors and consequently faced brutal torture, solitary confinement, and soul-crushing deprivation. One POW, future U.S. Senator Jeremiah Denton, appeared on international television and covertly blinked out T-O-R-T-U-R-E in Morse code. No training had prepared them for the pain and intense solitude their new mission brought.

At first, most POWs believed the ordeal would last several months. When future Adm. Bob Shumaker parachuted into North Vietnam on Feb. 11, 1965, he never imagined his sentence would last until Feb. 12, 1973: eight years and one day.

In 1967, the North Vietnamese expelled Shumaker, Denton and nine other especially subversive POW leaders from the Hanoi Hilton and exiled them to a dreadful gulag these eleven POWs nicknamed Alcatraz. The “Alcatraz Gang” spent two years isolated in windowless four-by-nine-foot  solitary cells. They spent 23 hours and 40 minutes per day confined inside, wearing leg irons at night.

While in forced isolation for many years, the POWS improved their minds, helped one another, and imagined a better future. Together, they did their duty and survived.

I met these notorious POWs while telling their story in my books "Defiant" and "Captured," and last month, I attended one’s funeral at Arlington National Cemetery. I was standing with Adm. Shumaker when an admirer approached him and marveled, “I never could have survived an experience like that.” Shumaker quietly responded, “Yes, you could have.”

He meant the POWs had no choice. In many ways, neither do we. POWs had to survive day by day – sometimes minute by excruciating minute. They had to rely on their minds and their brother POWs.

Apartments and homes shrink quickly when we isolate inside them, but at least our isolation comes with television, Wi-Fi and running water. The POWs focused on “getting their heads out of the box,” a technique still taught in military Survival Evasion Resistance and Escape (SERE) training. They relied on imagination and ingenuity to distract them from their reality; they never relinquished hope they would eventually go home.

Shumaker tapped code through his concrete cell wall to teach French to future Congressman Sam Johnson. In return, Johnson, an Air Force Thunderbird pilot, taught aerobatics. Several POWs used the same “Tap Code” to share elaborate menus, tapping out recipes for favorite meals. Many POWs spent weeks mentally constructing homes in their mind – calculating precise needs for bricks, wires and lumber. Shumaker now lives in the airy house he “built” while imprisoned in Hanoi. The POWs did all this knowing torture might come at any minute.

Americans at home today face threats of illness, food and medical scarcity, and income and job loss. Some face the challenge of children confined to quarters. The aging POWs and their fellow Vietnam veterans who sacrificed so dearly now recognize their vulnerability to this new disease. Ours is not an easy battle.

Perhaps we can all draw inspiration and lessons from these former POWs as we choose how to respond to today’s crisis. While in forced isolation for many years, they improved their minds, helped one another, and imagined a better future. Together, they did their duty and survived.

As Adm. Shumaker would suggest, we too can endure and prevail.