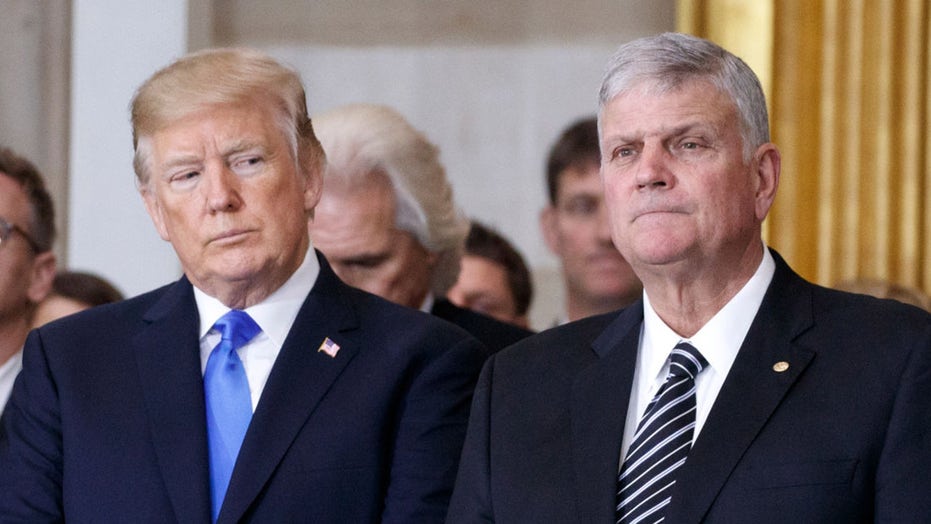 Trump punches back at Christian magazine over editorial calling for his removal; reaction and analysis from 'Fox News Sunday' anchor Chris Wallace.

The son of the late pastor Billy Graham said his father would have been "disappointed" by Christianity Today's editorial calling for the removal of President Trump, which was widely celebrated by the left and crashed its website.

Evangelist Franklin Graham told Fox News his father "dissociated himself from the magazine years ago" and was "disappointed" himself by the "moral high ground" they've tried to take but don't have for invoking his father's name to get rid of Trump.

"My father knew Donald Trump, believed in Donald Trump, and in this last election, he voted for Donald Trump," the president of the Billy Graham Evangelistic Association and Samaritan's Purse added. "And if he were here today, I'm sure he would tell you that himself."

Graham responded in a lengthy Facebook post late Thursday to the editorial titled "Trump Should Be Removed From Office," just a day after the House of Representatives passed two articles of impeachment against him.

"Christianity Today released an editorial stating that President Trump should be removed from office, and they invoked my father’s name (I suppose to try to bring legitimacy to their statements), so I feel it is important for me to respond," Graham wrote. "Yes, my father Billy Graham founded Christianity Today; but no, he would not agree with their opinion piece. In fact, he would be very disappointed."

The pro-Trump evangelical revealed his father not only supported the president but also cast his last vote for him -- a fact he has repeatedly declined to confirm before his post. Billy Graham, who died in 2018 at the age of 99, served as a spiritual adviser to decades of presidents from Harry S. Truman to Barack Obama.

BRET BAIER: PELOSI MAY REALIZE IMPEACHMENT POLITICS HAVE 'TURNED AROUND' IN KEY STATES

President Trump responded to the editorial Friday morning, tweeting the "far left magazine ... knows nothing about reading a perfect transcript of a routine phone call and would rather have a Radical Left nonbeliever, who wants to take your religion and your guns, than Donald Trump as your President."

"No President has done more for the Evangelical community, and it’s not even close. You’ll not get anything from those Dems on stage. I won’t be reading ET again!" the president added.

Galli responded to Trump's tweet on CNN saying he disagrees with the president "on about seven or eight different levels," calling the magazine "centrist," and revealing that he is stepping down as editor-in-chief soon.

He said fellow Christians need to speak out about "manifestly immoral" matters and said CT is not read by "far-right evangelicals."

"Christianity Today, when the opportunity presented itself to speak the truth clearly and charitably, we did it," Galli said. "We didn't shirk our duty and we did what we were called to do."

In his post, Graham points to Trump's many accomplishments that evangelicals have celebrated from pro-life policies to championing religious freedom at home and abroad. "Christianity Today wants us to ignore that?"

"For Christianity Today to side with the Democrat Party in a totally partisan attack on the President of the United States is unfathomable," Graham added, referencing Mark Galli, the editor-in-chief of Christianity Today, for failing to recognize that not a single Republican voted for impeachment.

In the editorial, Galli called Trump's July 25 phone call to the Ukranian president "profoundly immoral" and he labeled the case against the president "unambiguous."

President Donald Trump and first lady Melania Trump stand with Franklin Graham during a ceremony as the late evangelist Billy Graham lies in repose at the U.S. Capitol, on February 28, 2018 in Washington, DC.  (Photo by Shawn Thew-Pool/Getty Images)

Graham said the magazine, which rebukes evangelicals who back Trump and warned that their support "will crash down on the reputation of evangelical religion and on the world’s understanding of the gospel," is being used by the "left for their political agenda."

"It’s obvious that Christianity Today has moved to the left and is representing the elitist liberal wing of evangelicalism," Graham concludes. "Is President Trump guilty of sin? Of course he is, as were all past presidents and as each one of us are, including myself. Therefore, let’s pray for the President as he continues to lead the affairs of our nation."

Jerry Falwell, Jr., president of Liberty University, called the editorial "CT unmasked" on Twitter: "Less than 20 percent of evangelicals supported Hillary Clinton in 2016 but now @CTmagazine has removed any doubt that they are part of the same 17 percent or so of liberal evangelicals who have preached social gospel for decades."