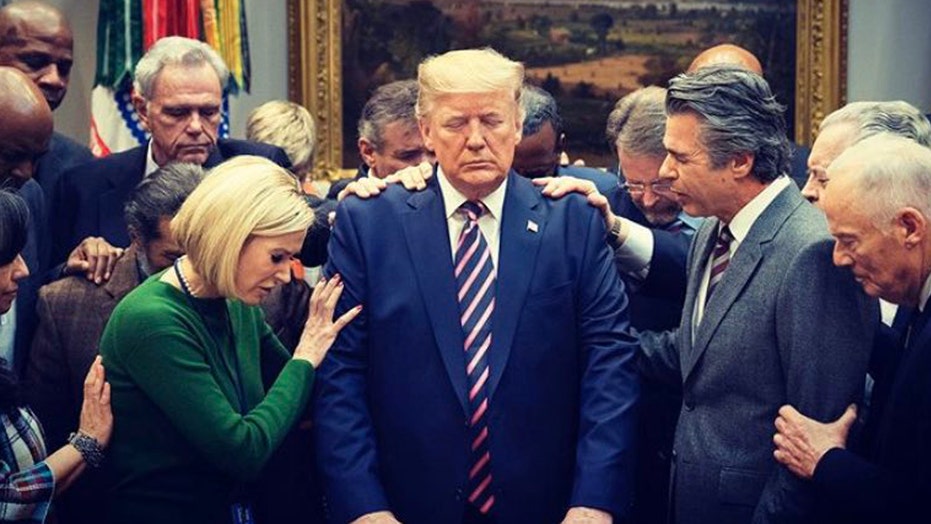 Trump campaign says polls are on president's side on impeachment

Evangelical Christian pastors and leaders who have prayed with President Trump in the Oval Office slammed House Democrats for what they called an "utterly partisan" impeachment vote Wednesday night.

Paula White-Cain, Trump's personal pastor and special adviser to the Faith and Opportunity Initiative in the White House, posted a midnight prayer for the newly impeached president, who overwhelmingly won the evangelical vote in the 2016 election.

"Tonight we lift up President Trump in prayer against all wickedness and demonic schemes against him and his purpose in the name of Jesus," White-Cain wrote. "Surround him with your angels and let them encamp around about him. Let all demonic stirrings and manipulations be overturned!"

"The Democrats in the House impeached millions of God-fearing, family-loving and patriotic Americans from the Democrat and Republican parties," the two leaders said.

"Our relentless prayers especially rest with the President of the United States and upon all of those who led us into this utterly partisan disregard of the most powerful tool our Founders gave us to undo a presidential election - which is exactly what this is an attempt to do," they added.

Evangelist Franklin Graham said, "Dems have been trying to destroy Trump since day one."

The president of Samaritan's Purse and the Billy Graham Evangelistic Association added, "We need to pray for President Trump and this nation."

Jentezen Franklin, pastor of Free Chapel, listed Trump accomplishments as president, saying he feels the need to pray for him again.

"The people's voice will be heard like never before when we vote again," Franklin said. "Pray, fast, and vote your faith 20/20!"

The House of Representatives voted Wednesday to impeach Trump, adopting two articles of impeachment alleging abuse of power and obstruction of Congress. He is the third president in American history to be impeached.

"If we do not act now we would be derelict in our duty. It is tragic that the president's reckless actions make impeachment necessary," Pelosi said ahead of the vote. "He gave us no choice."

"His conduct continues to undermine our Constitution and threaten our next election. His actions warrant his impeachment and demand his removal from office," House Judiciary Committee Chairman Jerry Nadler, D-N.Y., added.

The case is expected to head to the Senate for trial, though Pelosi has stirred speculation by not yet transmitting the articles to the chamber.