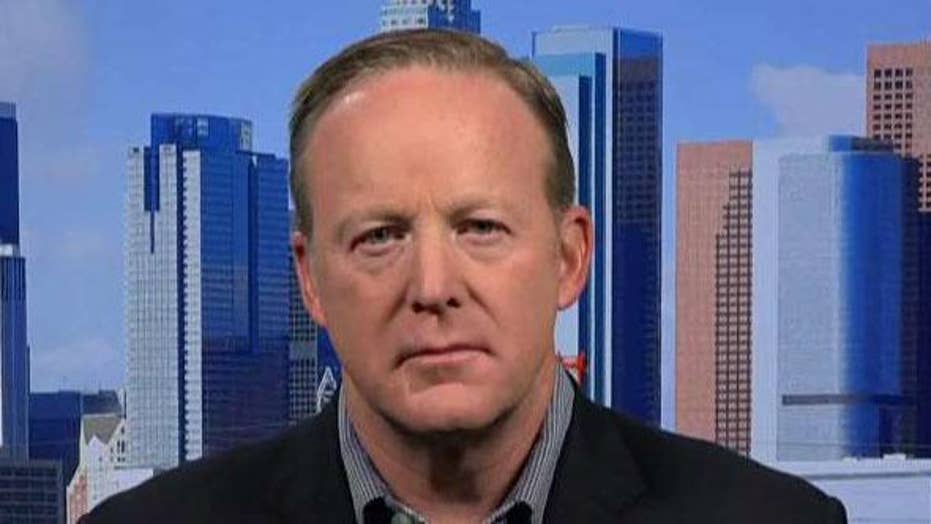 The White House demands a full House vote before they will cooperate with the impeachment inquiry into President Trump.

Former White House press secretary Sean Spicer said that President Trump was able to shore up his base and win in 2016 precisely because he ignored political advisers who pushed back on his brash speaking style.

Spicer was appearing on "Cavuto Live" when Fox News host Neil Cavuto asked him if he ever advised the president to tone down his rhetoric.

"The hard part that I had, Neil, is sure I would give him my suggestions and advice all the time -- the problem is that the president generally was right in the sense that when he does this, look at the fault line ... that he's created. He does all this and he's got a rock solid base," Spicer told Cavuto.

"These people on the Republican side will march through thick and thin," he added. Cavuto responded by asking about independents who would need more than blunt rhetoric for Trump to get their votes.

Spicer's comments came as Trump faced criticism over the words he used to attack Sen. Mitt Romney, R-Utah, and former Vice President Joe Biden. On Thursday, Spicer agreed that Trump needed to do more than just use brash rhetoric but re-emphasized the importance of his base.

"You need an intensified base that is going to go out there through thick and thin, that is going to campaign for you, put up that yard sign, make the eight extra phone calls, and right now, he has created this army of folks on the right that will do everything to protect him. That's much better than having a loose base with a bunch of folks ... that are kind of with you." Spicer said.

"And so, he has sort of traded the dynamic -- and he traded this last cycle and won. And everybody told him, you can't do it like this. He did it, he pushed aside all of the political pundits, all of the experts, and he won. And he won with states that we hadn't won since '88," he added.

Spicer also commented on House Democrats' impeachment inquiry, arguing the party was creating a "fault line" with conservatives who might be willing to oppose Trump.

"To assuage the far left, the socialist, progressive left of their party, they're going to this extreme that I think may be to their peril going into the general election," Spicer told Cavuto.