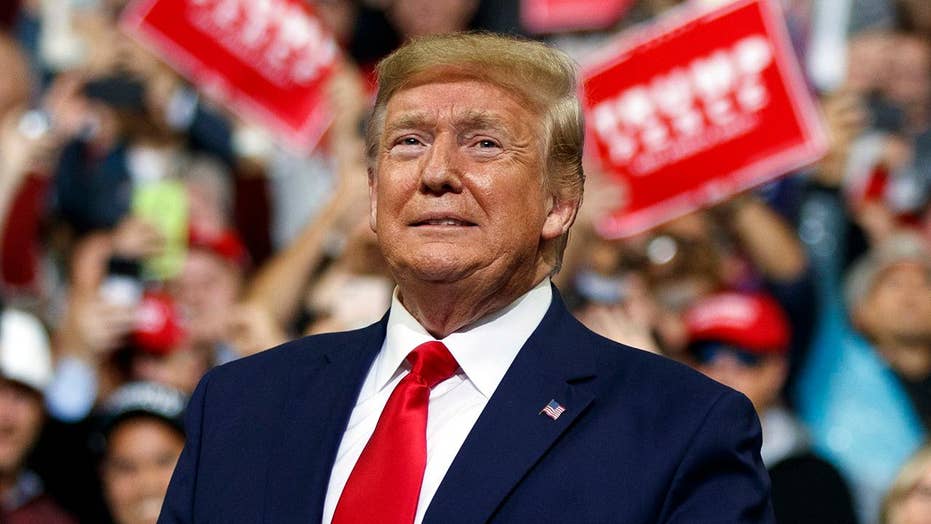 GRAPHIC LANGUAGE WARNING: Trump says Biden was only a good vice president because he understood how to 'kiss Obama's a--.'

Nancy Pelosi wants someone to think of the children.

House Speaker Pelosi, D-Calif., blasted President Trump during a caucus call on Friday for his latest crude attack on former Vice President Joe Biden, accusing him of having become a “potty mouth” -- before labeling the president “disgraceful.”

“One thing, I do want to say is that, POTUS – you know, that’s the President – POTUS has become a potty mouth and children are listening,” Pelosi said.

“This is – this is beyond disgraceful.” 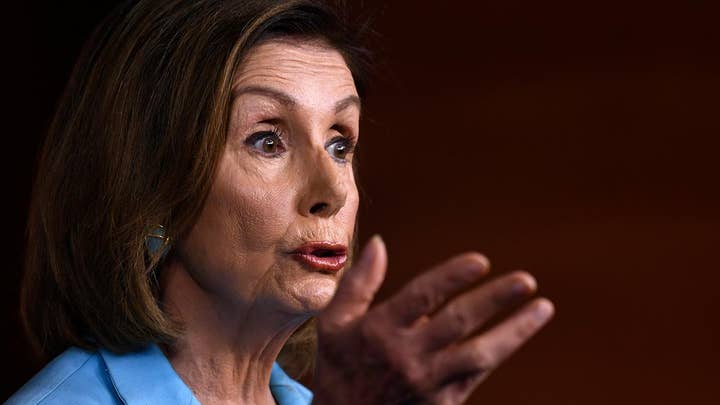 She then defended Biden -- her party’s potential 2020 presidential nominee -- after Trump ramped up his attacks on the former vice president during a raucous rally in Minnesota on Thursday night.

During the rally, the president launched into a mock interview with Hunter, Biden's son, whom Trump called "not too smart."

During Friday’s call, Pelosi said: “For him to say the thing that he said about Joe Biden last night was so far beyond the pale.”

She then turned her attention to the ongoing impeachment inquiry -- and how the “facts” of that should not stop anyone from making some of Trump’s other behavior into an election issue.

“That is about elections, and I will make my final point,” she said.

“What we are doing on impeachment is about the facts -- ‘Just the facts, ma’am’ -- and the Constitution.  His policy, his personality, his potty mouth, that’s about the election, and let’s make sure that we understand the reasons he is – the inquiry is because he has not honored his oath of office.  We will honor ours.”

Pelosi then called Republicans in the Senate cowardly and said the impeachment inquiry is about saving the Constitution.

“The Senate is saying, ‘Now that you are doing that, we are not doing it.’  You know, just because we have the courage to honor our oath of office doesn’t mean we have to fold to the cowardice of the Senate that is not going to honor theirs,” she said.

“The whole point of this inquiry is to save the Constitution of the United States.  The subpoena is the oversight that Congress has as a separation of powers – political branches of government have checks and balances on each other.

“I’ve said before: Trump, himself, is not worthy of impeachment because it’s divisive in the country.  But our Constitution is worth it. Our democracy is worth it. And, our republic, if we can save it, is worth it.”

Pelosi’s remarks came after the White House outlined in a defiant eight-page letter to the House Speaker and top Democrats on Tuesday why it will not participate in their “illegitimate and unconstitutional” impeachment inquiry, charging that the proceedings have run roughshod over congressional norms and the president's due-process rights.

Trump administration officials called the letter, which was written by White House Counsel Pat Cipollone and obtained by Fox News, perhaps the most historic letter the White House has sent. The document tees up a head-on collision with Democrats in Congress, who have fired off a slew of subpoenas in recent days concerning the president's alleged effort to get Ukraine to investigate political foe Joe Biden during a July phone call with Ukraine's leader.

Pelosi said: "This letter is manifestly wrong, and is simply another unlawful attempt to hide the facts of the Trump administration’s brazen efforts to pressure foreign powers to intervene in the 2020 elections. ... The White House should be warned that continued efforts to hide the truth of the president’s abuse of power from the American people will be regarded as further evidence of obstruction. Mr. President, you are not above the law.  You will be held accountable.”

Fox News' Chad Pergram, Gregg Re, and John Roberts contributed to this report.