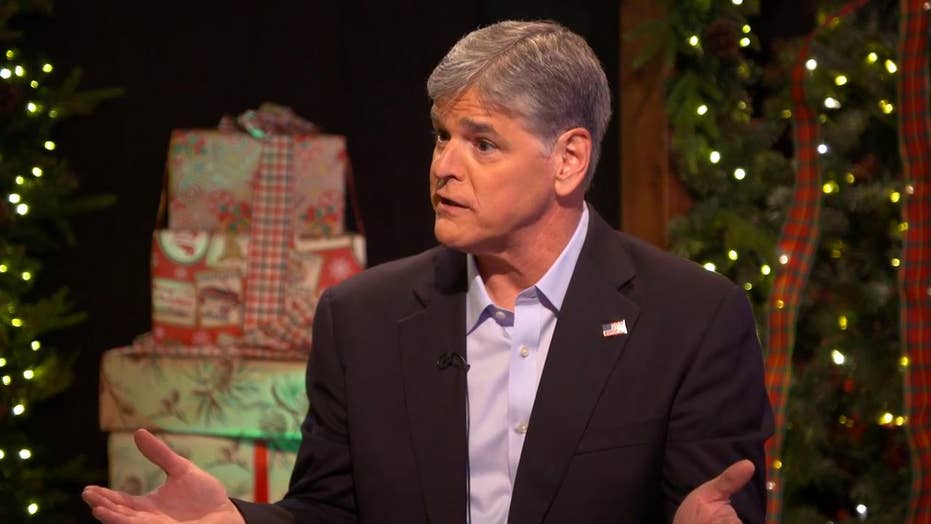 Sean Hannity opened up about his faith in a holiday edition of "Ainsley's Bible Study" on Fox Nation, revealing the ups and downs of his religious journey and how his faith has changed over the years.

"My faith actually has gotten stronger as I've gotten older," he said. "I would say I realize more than ever that I not only need, but I want, God in my life."

Hannity attended Catholic school as a child but is no longer affiliated with the Catholic church. Known for challenging atheists on his radio show "The Sean Hannity Show," the Fox host broke down the basis of his faith.

"I think of God in an interesting way," he said. "I think for me is that science is showing us, universes within universes within universes, beyond any imagination that we could ever have. Or you look at Genesis and God created the light and the seven days, morning came, evening the second day. And I believe God created every man, woman and child on this earth. And we as human beings will never, ever be able to understand the majesty of this creation."

"It's beyond any comprehension and it all fits beautifully," he continued. "And then you look at something like gravity and you say, 'Wow, that's pretty powerful.' Then you look at the animal kingdom and...the smallest microorganisms...human beings. And I don't think, you couldn't look at that objectively, and not conclude that there is something so amazing out there that all of that was created."

Hannity, who described himself as an "incorrigible" kid growing up, was quick to admit his flaws in the Fox Nation episode but credited his "conscience within him" for keeping him grounded.

" I realize more than ever that I not only need, but I want, God in my life."

"I think as a flawed human being and somebody that was an incorrigible kid to my parents growing up, I'm not perfect. I know my imperfections. How is it that I have something that lives within me that tells me every single solitary thing that I do in life that is wrong? It tells me...I feel bad about it. That's a conscience to me. That's a God within us telling us, 'Hey, live the right way.'"

Hannity recounted his younger days working multiple jobs beginning as a dishwasher at age 12, and then as a bartender at a local bar during his high school years. After spending 10 years in the construction business, Hannity said he felt unhappy with his life and embarked on a new journey.

"When I was living a life back in my late teens and 20s, I didn't like who I was," he recalled. "And I remember I said, 'You know what? I'm done with that life.' And pretty early on, I made a decision to change and get on the right track."

Hannity expressed gratitude for his large platform in the media and encouraged viewers to seize the opportunities presented to them.

"I feel my whole life has been a blessing," he said. "I don't know how all of this happened. I don't ever think about all of this happening. I don't think I'm successful. I don't look at it [that way]. All I did was take chances and follow my dream and my passion. And when opportunities presented themselves, I just jumped."

THOMAS MCDANIELS: WHY PEOPLE ARE LEAVING AMERICAN CHURCHES -- AND HOW THEY WILL SURVIVE

When Ainsley Earhardt asked Hannity how he deals with media scrutiny and criticism directed towards the unfiltered host, Hannity said he stays true to himself and doesn't worry about "being liked."

Later in the segment, Hannity discussed Judeo-Christian principles and the "intersection between politics and faith."

"This whole country is founded on Judeo-Christian principles that I believe and would argue have advanced the human condition more than any other system designed by man," he said. "And there is an intersection between politics and a belief or a faith in God. And, you know, the United States of America has been the light to the world."

Quoting his friend and talk show host Barry Farber who once said "There has never been a country in the history of mankind that has accumulated more power than this country, and abused it less," Hannity shared his own revision of Farber's words.

"I add, there has never been a country in the history of mankind that has accumulated more power and used it for the advancement of the human condition than the United States of America," he said.

"There has never been a country in the history of mankind that has accumulated more power and used it for the advancement of the human condition than the United States of America."

Commending Hannity for his honesty with his viewers regarding his flaws and the ups and downs of his religious journey, Earhardt said it boiled down to just trying to "make yourself better the next day."

"You know, you're very good on your show about saying, 'I'm not perfect. I need God. I've made a lot of mistakes,'" she said."And I think people love that about you....we all backslide. Life is long. Life is hard. There are times when you do things that you're not happy about -- and it's just trying to make yourself better the next day."

Hannity responded: "You know, one of the things that I've noticed in my life, because we're so busy, all of us every day...you've got to get up in the morning, you shovel your coffee down your throat, you got to feed your kids... You got to race off to work. And you go home, cook them dinner...study and then go to bed and pass out -- and we do that five days a week.

"There's not a lot of time for God in there," he concluded, "but I found when I am at my best, in my opinion...or at least more at peace with myself [is] when I spend a half-hour just reading either a Taylor Caldwell book or the Bible or a Bible study. When I spend that time and make it God time, I feel at my best."

For a deeper look on Sean Hannity's faith, how he focusses on prayer despite daily distractions, and the values he learned from his parents growing up, join Fox Nation and watch the full holiday special of "Ainsley's Bible Study" today.