Hunter Biden whistleblower says he faced retaliation: 'I expect it to continue'

John Paul Mac Isaac is set to release his new book, "American Injustice," in which he details what took place after he first discovered Hunter Biden’s laptop. The release comes just months before a new Republican House majority plans to begin investigations.

Mac Isaac explained on "America’s Newsroom" on Monday that he has been working closely with members of Congress as their planned investigation into Hunter Biden nears. He said he has provided clean copies of the laptop’s contents and reported every interaction he’s had with the FBI to Congress.

He told co-host Bill Hemmer that he sees two possible stories that should be pursued.

"I see holding the FBI accountable for colluding with our mainstream and social media to block a story, a real story with real consequences," Mac Isaac said of the Hunter Biden laptop story. "Also, get to the bottom of what the Biden family was up to when Joe Biden was vice president." 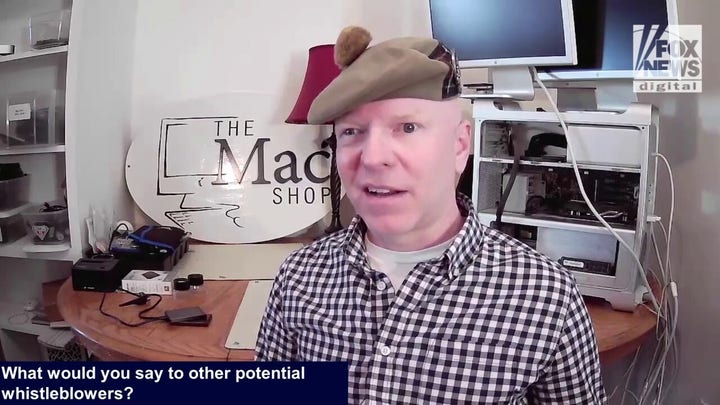 Mac Isaac had been swept up in the New York Post's bombshell reporting in October 2020 that shed light on the shady business dealings overseas of the son of then-Democratic presidential nominee Joe Biden as the Delaware laptop repair shop owner came forward with Hunter Biden's laptop after being alarmed by its content in 2019.

On Monday, Mac Isaac expressed optimism about the new class of Republicans who have secured a majority in the House as they plan investigations of the Biden family, the Justice Department and the FBI.

"We have the people in Congress now, they have the resources and the tools, and I'm hoping that we're going to get some accountability," he said.

Mac Isaac described one of his first interactions with an FBI agent as "chilling." He said he was "overjoyed" when the agents handed him a subpoena, and he made a comment that he would change their names when he eventually wrote his book.

"That's when Agent Mike turned around and told me that, in their experience, nothing ever happens to people that don't talk about these things," Mac Isaac said, noting that he did, in fact, change their names in the book.

The comment, Mac Isaac suggested, was a warning against speaking out about what was going on.

And while Mac Isaac has said that Americans should be able to go to authorities without fear of retribution, he has experienced otherwise.

"I have been dealing with retaliation from multiple fronts for the past two years when what I did was leaked to the country. I'm expecting it, and I'm going to expect it to continue," he said.

"When people are threatened, they fight back," Mac Isaac said.