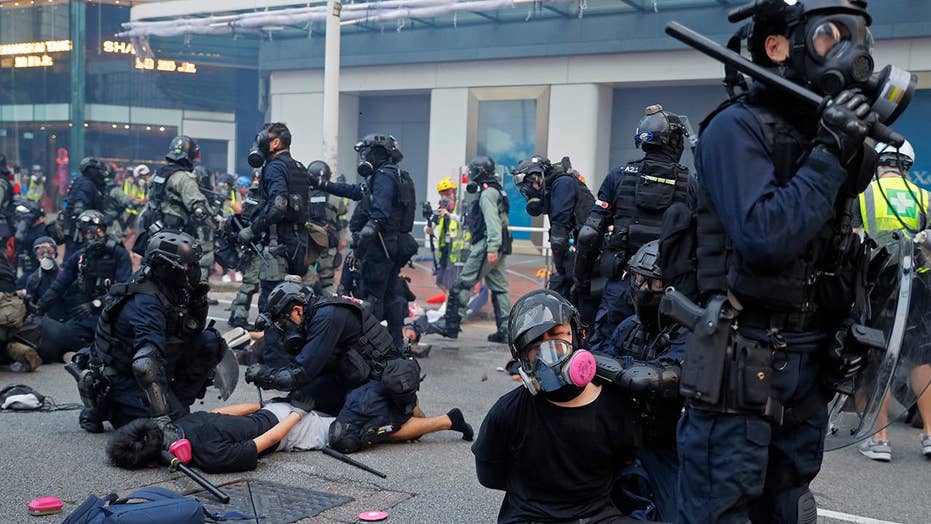 A pro-democracy protester was shot by police in Hong Kong on Tuesday — a new escalation in the widespread violence that comes as China marks its 70th anniversary of the Communist Party.

The protester was shot in the left side of the chest when a police officer opened fire with his revolver into a group, a police official said. It was the first time a protester has been shot as part of the unrest, which began in June of this year.

The 18-year-old protester's condition was not immediately known.

Video from the scene shows a dozen black-clad protesters hurling objects at a group of riot police pursuing them. One officer, who was surrounded, drew his revolver and pointed it at the group, before firing — leaving one protester to collapse on the street while others fled.

A security clampdown in the city to thwart violence that would embarrass Chinese President Xi Jinping failed to deter the protests, including a massive march in the city center.

Organizers said at least 100,000 people marched along a broad city thoroughfare in defiance of a police ban, chanting anti-China slogans and some carrying Chinese flags defaced with a black cross. Police didn't provide an estimate of the turnout.

"They are squeezing our necks so we don't breathe the air of freedom," King Chan, a 57-year-old who came out to protest with her husband, told The Associated Press.

She was one of the thousands who confronted police in multiple locations across the city, the largest number of simultaneous protests since early June, which were sparked over a now-shelved extradition bill that activists say was an example of how Hong Kong's freedoms and citizen rights are being eroded.

The protests contrasted China's Communist Party celebrations on Tuesday in Beijing marking its 70th year in power. Hong Kong is a former British colony that's been part of China since 1997 and which China says benefits from autonomy, crediting a "one country, two systems" approach. 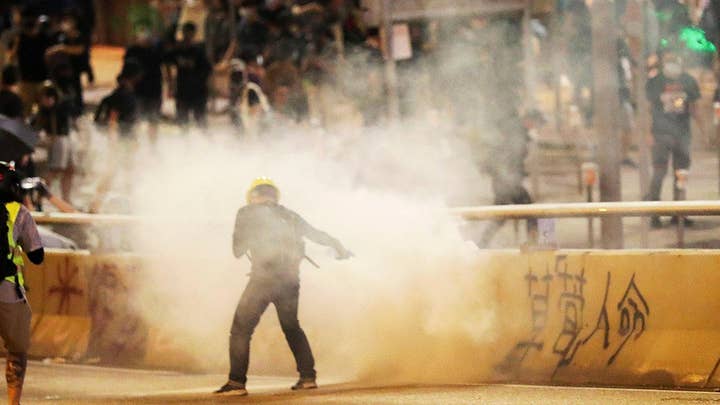 The structure allows the city certain democratic rights that are not afforded to people on the mainland — but, in recent years, some people have accused the Communist Party-ruled central government of slowly stripping their freedoms.

"Today we are out to tell the Communist Party that Hong Kong people have nothing to celebrate," activist Lee Cheuk-yan as he led the downtown march said. "We are mourning that in 70 years of Communist Party rule, the democratic rights of people in Hong Kong and China are being denied. We will continue to fight."