On Thursday, the Department of Justice rejected McCabe's appeal regarding the ongoing criminal probe. The probe is exploring whether he misled investigators concerning a media leak about the Clinton Foundation just before the 2016 election.

U.S. Attorney Jessie Liu ultimately decided to recommend the DOJ to proceed with criminal charges against the former FBI official.

Following the breaking news, however, Toobin gave a full-throated defense of McCabe.

"Andy McCabe is a CNN contributor. He's a colleague and a friend to many of us who work here. He's here recently, but people need to factor that into what they're hearing," Toobin began. "This is an extremely unusual prosecution. Andy McCabe had the right to speak to reporters. That is beyond dispute. As deputy director of the FBI, he had the right to speak to reporters. He also has an impeccable record as one of the most honored and successful FBI agents of his generation.”

Toobin went on to describe McCabe's actions as "complicated as hell," and said that it's "really difficult to understand even what the lie is here." Toobin then tweaked his own comment, saying "alleged lie."

"The alleged lie is, 'Well, you have the right to speak to the reporters and you spoke to the reporters,' months later, 'Describe what was in the conversation that you had every right to have at a time when he is being interviewed for another subject,'" Toobin continued. "You never have the right to lie to an inspector general. If he lied, it’s a crime, but lying to the inspector general is rarely prosecuted. Lying in these very esoteric circumstances where, you know, it’s about this conversation, that conversation – is rare. You know, it looks like he’s going to be indicted, but you know, good luck to the government proving this case.” 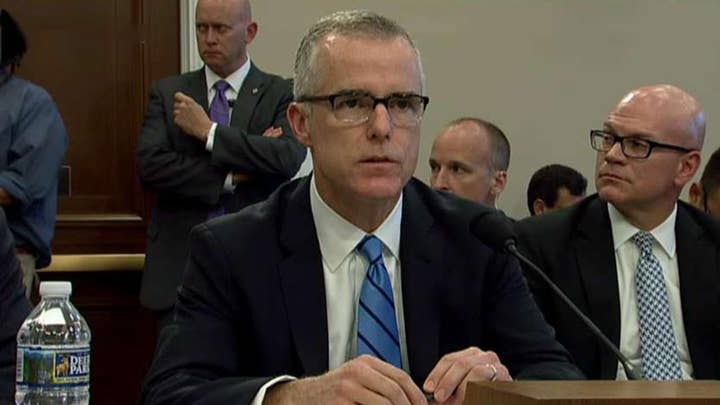 The CNN commentator later stressed that President Trump "has been on a crusade to disparage and insult" McCabe "for literally his entire presidency."

McCabe was fired from Justice in early 2018 for his "lack of candor" toward investigators, but managed to land the cable news gig last month.