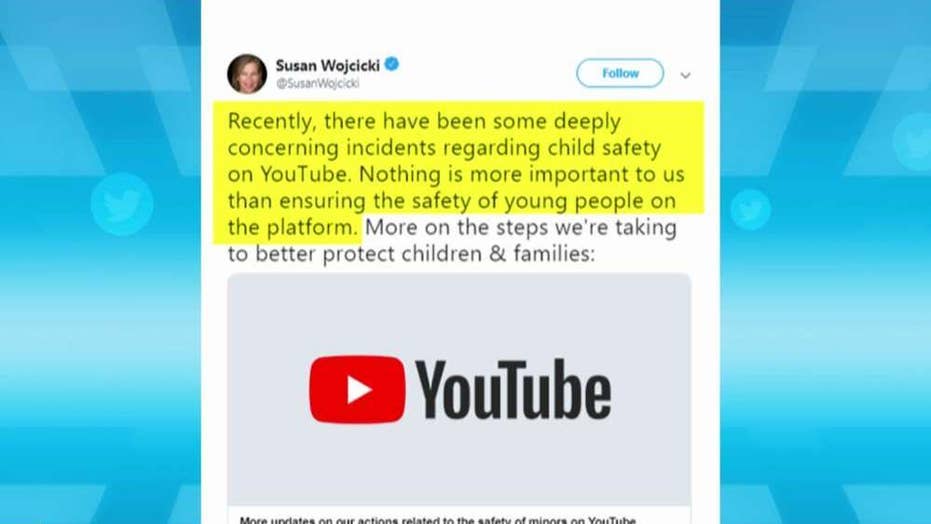 Conservative media figures are deriding a new YouTube policy, arguing it censors free speech and could have a disproportionate impact on right-leaning commentators.

Announced on Wednesday, the policy seemed to come in reaction to a months-long controversy surrounding comedian Steven Crowder and his comments about Vox writer Carlos Maza's sexuality.

Wednesday's announcement targets harassment and builds on the platform's hate speech policy announced in June. The new guidelines would prohibit "demeaning language that goes too far" — specifically, content that "maliciously insults someone based on protected attributes such as their race, gender expression, or sexual orientation."

The massively popular platform previously demonetized Crowder's videos – claiming that he "harmed the broader community" at YouTube – but acknowledged they didn't violate the company's standards at the time.

It's unclear how YouTube would determine "malicious" intent but the guidelines indicate it would include, for example, repeatedly using pronouns other than someone's preferred ones. According to conservative commentator Ben Shapiro, the policy may seem harmless but actually contains "insanely vague"  standards that could result in censoring conservative ideas.

"Read in the most charitable way, this could simply be attempting to get rid of Nazi content, for example," he told Fox News on Wednesday. "But the language is far too broad to be restricted this way."

He pointed to potential problems surrounding debates about biology in athletics and individuals who identify as an alternate gender. He also cited videos that call out disparities between Muslims and Christians, as revealed by polling data — something Shapiro himself has done in a video posted on YouTube.

Shapiro added that YouTube's vagueness would continue to harm public trust in the company.

"When YouTube says that they want to 'want to reduce the spread of content that comes right up to the line,' they haven't defined the line So now they've written themselves a blank check to ban whatever content they like, calling it 'questionable,'" he said.

"They've now created a set of constantly moving goalposts, and assured us that we ought to trust them. But it's lack of trust in their judgment and understanding that has already created their public perception problems. These new guidelines will exacerbate that problem."

"Though targeted harassment and bullying is something all people should be able to agree has no place in the arena of public discourse, sadly this ideal is rarely upheld when conservative opinions are being targeted by leftist bullying and harassment," he told Fox News.

He also said that YouTube was shifting power away from creators on the platform. "YouTube’s policies remove the power from the creator to control their own discussions and engagement, and allow YouTube the freedom to discriminate and the power to control our political and cultural narratives online."

"This is YouTube anti-free speech loons trying to make the world one giant safe space ... It's insanity and the censors will never be happy until everyone has their speech restricted," he said.

Gainor runs MRC's TechWatch program, which monitors bias from organizations like YouTube. He told Fox News that YouTube's new policy would force them to "go back in time and censor thousands of movies and TV shows."

Crowder did not immediately respond to a request for comment but, prior to the policy's release, he previewed company changes by predicting that a YouTube "purge" was coming.

After a series of skeptical tweets, Maza said: "YouTube loves to manage PR crises by rolling out vague content policies they don't actually enforce. These policies only work if YouTube is willing to take down its most popular rule-breakers. And there's no reason, so far, to believe that it is."

Google, YouTube's parent company, declined to comment but responded to "purge" concerns by referring Fox News to tweets regarding its terms of service.

Wednesday's backlash was just the latest against the tech giant, which has claimed that it doesn't engage in political bias. The group has been the target of complaints from conservative groups like Live Action and PragerU, both of which seek to educate people on hot-button issues like abortion. Google also reportedly removed more than 300 Trump campaign videos, although YouTube's CEO has said political bias isn't built into her algorithms.

Craig Strazzeri, PragerU's chief marketing officer, previously told Fox News that the company was restricting their content simply because they were conservatives.

A PragerU lawsuit from earlier this year charged the company with defrauding the public and obtaining special legal status by wrongly claiming to be a neutral public forum.

On Wednesday, Strazzeri said YouTube's policy was troubling and would likely limit free speech. “It's always been YouTube's strategy to use increasingly vague and broad guidelines as a way to silence conservative voices," he said.

"To YouTube any criticism is now seen as 'harassment' and this is a troubling sign that will lead to more censorship and less free speech online. YouTube should look in the mirror, since they have been harassing us for years and restricting hundreds of our videos."