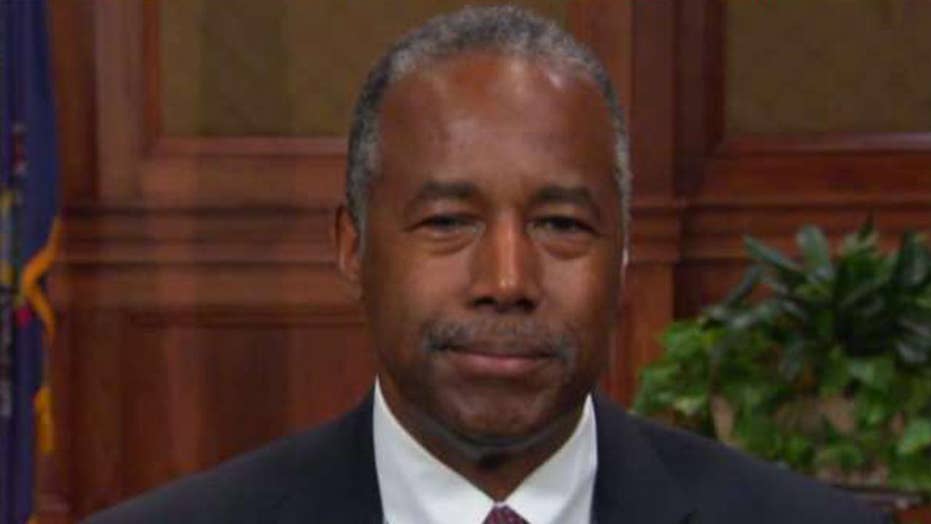 Secretary Carson attacked as 'transphobic' for saying there are two genders

After being asked to apologize for remarks he insists were mischaracterized, Housing and Urban Development Secretary Ben Carson chastised Rep. Jennifer Wexton, D-Va., and said her thirst for political correctness was immature and would contribute to the destruction of the country.

Wexton grilled Carson during a House Financial Services Committee hearing about his reported comment about "big, hairy men" using women's homeless shelters. Carson made the remark at a HUD meeting in San Francisco last month and some in attendance interpreted it as dismissive of transgender people.

Carson claimed he was repeating a story he heard from a women's group that hailed from Alaska but couldn't recall their name. Wexton gave him the opportunity to apologize, but Carson refused.

Instead, he chastised her for being overly sensitive and claimed that thinking like hers would destroy the foundation of America.

"Well, first of all, I didn't describe transgender women that way," he shot back on Tuesday. "I was relating a story that a women's group told me about big hairy men – who are not transgender women by the way – coming into your facility and having to be accepted because of the rules that were in place."

“You don’t feel the need to apologize for those comments?” Wexton asked.

"No," Carson replied. "I think this whole concept of political correctness: 'You can say this. You can’t say that. You can’t repeat what someone said,' is total foolishness and is going to destroy our nation and we need to be more mature than that."

Wexton tweeted about the exchange and described Carson's words as hateful while regretting his defiant response.

"Today I gave Secretary Carson the opportunity to apologize for his remarks slurring transgender women as, 'big, hairy men,'" she tweeted. "Regrettably, he declined that opportunity. Hateful words translate into discriminatory policy—and Secretary Carson has demonstrated that time and again."