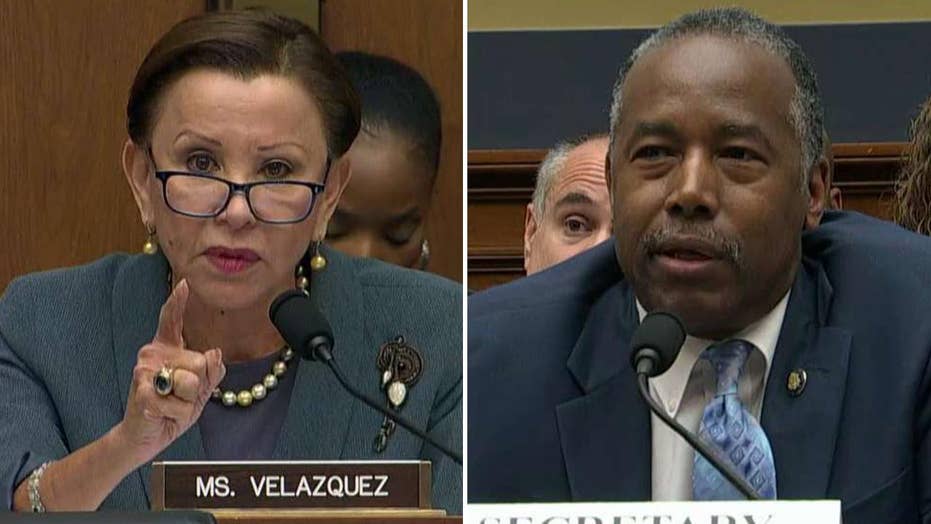 The dispute centered on HUD missing a deadline to give Puerto Rico instructions on how to apply for $8.3 billion in aid to prevent damage from future natural disasters. A bill signed by President Trump in June gave HUD a 90-day deadline to provide those rules, Newsweek reported. Ten jurisdictions included in the bill got the directions they needed, with Puerto Rico being the only one left out.

Carson was grilled by the congresswoman on the apparent decision to withhold funding over concerns about the government's management.

“Last week, your chief financial officer and your principal deputy assistant secretary for community planning and development admitted before Congress that HUD intentionally missed a legally required deadline that would have made congressionally appropriated funds available to Puerto Rico," Velazquez told Carson. "Let me ask you, where specifically in federal law is HUD empowered to unilaterally withhold ... funds that have been appropriated by Congress?”

Housing and Urban Development Secretary Ben Carson speaks during a news conference during a trip to Baltimore, Wednesday, July 31, 2019.

“Congress has specifically mandated that the Secretary of HUD make sure that funds that are allocated or provided for certain jurisdictions have the resources and the capacity to manage them," Carson responded.

Velazquez then cut off Carson and told him he was not answering her question before asking it again. Carson attempted to speak but Velazquez interrupted him another time.

“Reclaiming my time," she said, "since you are not going to answer my question.”

“Seemed like an answer to me,” Carson shot back. “Are you looking for an answer or a soundbite?”

Velazquez, after explaining that the HUD inspector general had not recommended that the funds be withheld, insinuated that the Trump administration withheld the money from Puerto Rico out of spite.

“I wonder if this was politically motivated,” she said. “Did anyone at the White House, including the president or the chief of staff, ask you to withhold money that was supposed to go to Puerto Rico?”

Carson responded: “Interestingly, a lot of what we do is dictated by common sense. ... If you have a jurisdiction in which there are three changes of government within a month and which has historically had difficulty with financial management, to put an unprecedented amount of money in there without the appropriate controls is irresponsible.”

Velazquez then accused Carson and the Trump administration more generally of having contempt toward the U.S. territory that was devastated by Hurricane Maria in 2017.

Trump has long clashed with Puerto Rican leaders and had called former governor Ricardo Rosselló a "terrible governor" before he resigned in August. Trump said in July that Puerto Rico has "grossly incompetent leadership."

Velazquez said Tuesday that the disaster relief issue “speaks to this administration’s disregard for Puerto Rico," asking HUD to send to Congress "every communication related to Puerto Rico."

“And you know what sir, we’re going to find out what motivated for you to withhold this money for the people of Puerto Rico. If this was about corruption, as you claimed in the press, so deal with your own corruption when you have FEMA officials who were arrested in Puerto Rico.”

Carson responded: “We have nothing to hide so I’d be glad for you to get that information."

“One way or another we’re going to know the truth," Velazquez said before finishing her questioning.

The exchange prompted ranking member Rep. Patrick McHenry, R-N.C., to admonish Velazquez for her treatment of Carson -- before the congresswoman responded that alleged corruption in Puerto Rico is not a good enough reason for withholding funds when many other locations around the country received disaster relief funds without issue.

The exchange forced Chairwoman Maxine Waters, D-Calif., to use her gavel to get Velazquez and McHenry to allow the hearing to continue.