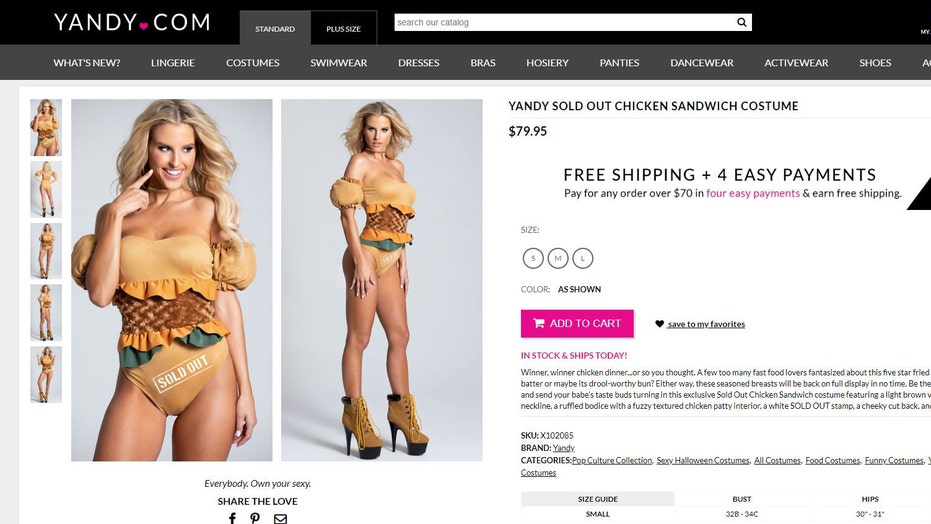 Remember back in August, when Popeyes had a Chicken Sandwich that everyone fell in love with, only for it to be removed from menus after a month, and then still not return despite Popeyes repeatedly saying it was coming back?

Well, lingerie and costume retailer Yandy.com remembers, and it has officially brought the sandwich back for Halloween. And it’s sexier than you probably remember it.

The costume comes in a high-cut strapless velour bodysuit with two puffy sleeves, which give the illusion of the top bun, while the bottom bun is stamped with a large “Sold Out” logo. (Yandy.com)

POPEYES CUSTOMERS SLAM NEW BYOB CAMPAIGN: 'FIRE WHOEVER CAME UP WITH THIS IDEA'

The (in)famous sandwich, which prompted a viral social media campaign and sparked a "Chicken Wars" feud between Popeyes and Chick-fil-A, is now available as a high-cut strapless velour bodysuit with two puffy sleeves, which give the illusion of the top bun, while the bottom-bun area is stamped with a large “Sold Out” logo.

Across the torso of the costume is a velvet fried chicken bodice sandwiched between green ruffles – seemingly representing lettuce, which the Popeyes Chicken Sandwich did not have – and two nondescript yellow ruffles, which might possibly represent the sandwich's optional "spicy Cajun spread."

The actual Popeyes Chicken Sandwich released in August was comprised of a breaded and fried chicken cutlet, pickles and either mayo or a Cajun spread between two Brioche buns.

However, the price point for the "Sold Out Chicken Sandwich Costume" is a tad higher than the $4 sandwich, at $80.

The Popeyes Chicken Sandwich was comprised of a breaded and fried chicken cutlet, pickle and either a mayo or Cajun spread between two Brioche buns. (Popeyes)

Not exactly the Halloween costumes you're looking for? For those who love these food controversies but don't want the meat, Yandy still has you covered: As part of its continuing efforts to release costumes you never asked for, Yandy recently debuted a plant-based “Beyond Burger” costume for all the fake-meat enthusiasts.