From politics and cultural appropriation to race and mental health, the topics of this year's fashion controversies were far-reaching and highly divisive. The internet didn't hold back when it came to calling out retailers for items they deemed inappropriate or insensitive, with many companies forced to pull products off the shelves to appease the public.

Fashion company Revolve was slammed online for listing a sweatshirt that reads: “Being fat is not beautiful it’s an excuse.” A very slender model was pictured in the $168 Paloma sweatshirt on the company’s website and was criticized on Twitter, with some calling the brand “a mess.” 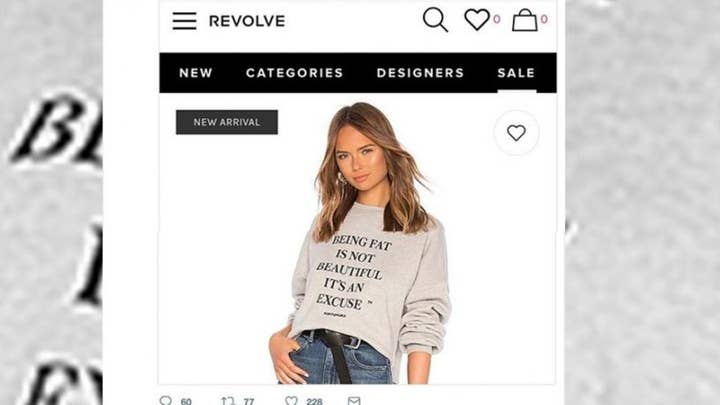 Fast-fashion retailer Zara came under fire for selling a plaid “check mini skirt,” which the website described as a “flowing skirt with draped detail in the front.” However, many were quick to point out on Twitter that the garment suspiciously resembles a lungi, or lungyi, longyi, sarong, etc., traditionally worn by people in India and other South and Southeast Asian countries, calling it "cultural appropriation."

Amazon pulled a number of items for sale on its website which featured the saying, “Slavery gets s--t done.” The online retail giant removed the products –  reportedly ranging from T-shirts, to bags, to mugs, to children’s clothing – following backlash from shoppers.

A choker from ASOS caused a stir for all the wrong reasons. The U.K. store removed the online listing for a true-to-size belt designed to be worn fastened around the neck after being slammed as “vile” and “sickening” on Twitter for seemingly glorifying suicide.

H&M was forced to offer an apology after posting an online advertisement featuring a black child modeling a sweatshirt reading “Coolest Monkey in the Jungle.” Outrage over the ad bubbled up after social media users noticed that H&M’s U.K. website was advertising this particular hooded sweatshirt using a young black child, while other sweatshirts from the same line were advertised on white models.

Topshop was slammed for selling “vegan” T-shirts with a recipe containing eggs and butter printed on the label. The baby pink top features the word “vegan” along with a picture of a herbivorous dinosaur to promote the plant-based diet. But inside the top is a label with a cake recipe containing a list of ingredients including “3 large eggs”  and "16oz butter" — both of which would be excluded from the plant-based vegan diet.

U.K.-based clothing retailer Boohoo yanked one of its pajama sets from its website after complaints that the shirt’s message was insensitive. The company was offering a Christmas-themed pajama set with the words “Obsessive Christmas Disorder” printed across the top, complete with the O, C and D highlighted in different lettering, which many saw as insensitive to those who suffer from the disorder.

Walmart pulled the controversial anti-Trump “Impeach 45” apparel from its website after receiving harsh feedback online. The outcry sparked a #BoycottWalmart trend on Twitter as users expressed their distaste for the chain promoting the impeachment of President Trump. 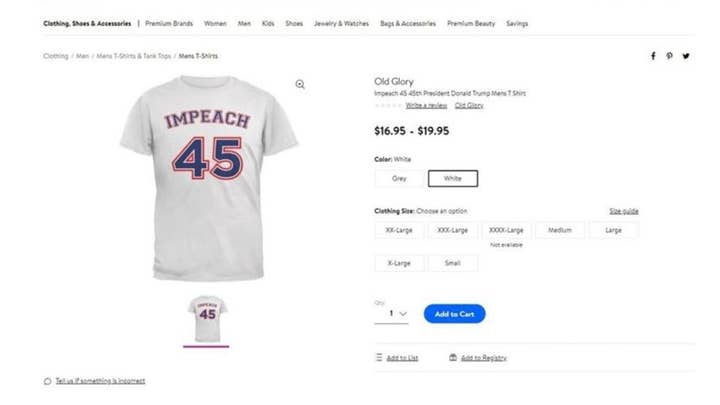 'Boys Will Be Boys' shirt

Australian pajama company Peter Alexander Sleepwear faced backlash after pulling a controversial shirt from its website. The sweatshirt, which read "Boys will be boys," left one woman concerned over the message it was sending. But after the company responded by removing the item, they were inundated on social media with comments from angry customers who didn't think they should have given in to her demands.