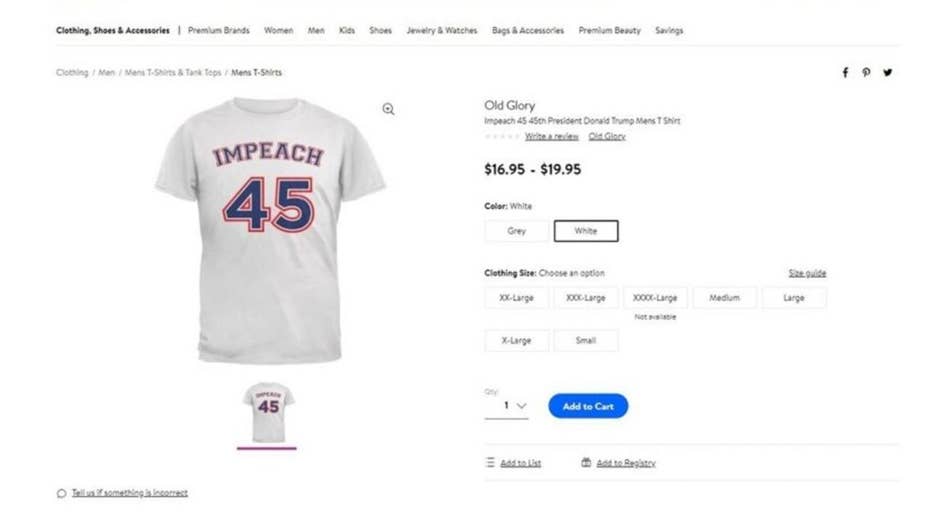 A ‘Boycott Walmart’ campaign has been launched after it was discovered the store was selling ‘impeach 45’ clothing on its website.

Walmart has pulled the the controversial anti-Trump “Impeach 45” apparel from its website after receiving harsh feedback online.

The outcry sparked a #BoycottWalmart trend on Twitter as users expressed their distaste for the chain promoting the impeachment of President Trump, echoing some Congressional Democrats.

Ryan Fournier, chairman of the group Students for Trump, was one of the first to discover Walmart was selling the clothing item, according to the International Business Times. He asked the company in a tweet, “What kind of message are you trying to send?”

"These items were sold by third party sellers on our open marketplace, and were not offered directly by Walmart. We’re removing these types of items pending review of our marketplace policies," a Walmart spokesperson told Fox News.

One user accused Walmart of joining the “far left.”

“I didn’t want to believe it. So I searched myself,” another user wrote. “This is despicable. All American Walmart? Im (sic) out!!!”

Old Glory is the company that was selling the “Impeach 45” apparel and it’s wasn't the only one. A quick search on Walmart.com revealed three other companies selling Trump impeachment merchandise.

It’s not the first time Walmart has caused a stir.

The store came under fire in November after a shirt design that read “Rope. Tree. Journalist. SOME ASSEMBLY REQUIRED” was listed on its website through an outside company.

Teespring had their shirts pulled off the Walmart website days later.