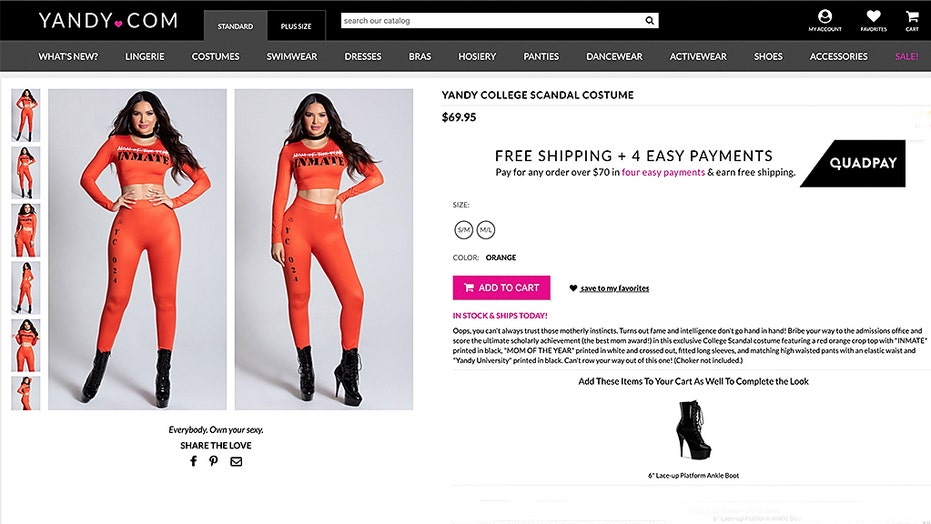 Can’t Photoshop your way out of this one.

The infamous college admissions scandal has been honored with its very own sexy, inmate-inspired Halloween costume, released on Wednesday by fast fashion retailer Yandy.

“Oops, you can't always trust those motherly instincts. Turns out fame and intelligence don't go hand in hand!” the $70 outfit’s description page reads, joking that shoppers can “bribe your way to the admissions office and score the ultimate scholarly achievement” — being the “best” mom.

The infamous college admissions scandal has been honored with its very own sexy, inmate-inspired Halloween costume, released on Wednesday by fast fashion retailer Yandy. (Yandy.com)

Sure to turn heads at any holiday party, the skintight, long-sleeved orange crop top features the text “Mom of the year” crossed out on the chest and “inmate” splashed across. A matching set of high-waisted pants with a “Yandy University” logo completes the snarky look.

The costume appears to be a direct dig at famous faces including Felicity Huffman and Lori Loughlin, with Yandy using the hashtag #FullJailHouse in revealing the costume on Twitter. The actresses were among the several dozen people charged in a nationwide college admissions bribery scandal in March. The wealthy offenders allegedly funneled cash to help their children get into some of the nation's most prestigious colleges and universities.

In September, Huffman was sentenced to 14 days in prison, and also smacked with a $30,000 fine, one year of probation and 250 hours of community service for paying $15,000 to have her daughter’s SAT scores corrected. She must report to a facility chosen by the federal Bureau of Prisons on Oct. 25 and has asked to do her time at an all-female facility closer to her home in Southern California. 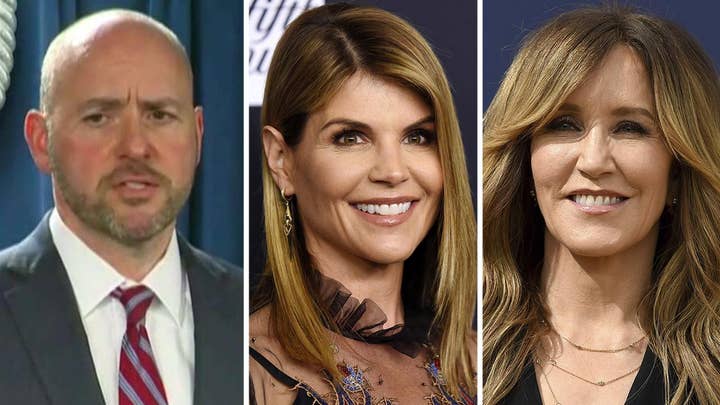 Loughlin and husband Mossimo Giannulli, meanwhile, refused the plea deal that other parents in the Operation Varsity Blues case – including Huffman – accepted.

The Hallmark Channel star and her fashion designer hubby were then hit with additional charges of money laundering and conspiracy. They now face up to 40 years behind bars if convicted of all counts and charges.

The couple is due in court in 2020, with their trial estimated to take place early in the New Year.

Those wary of wearing the prison-chic garb on All Hallow’s Eve will perhaps find the perfect look in Yandy’s other new searing, “sexy” costumes, including sultry spins on Mr. Rogers, tariff tensions with China and the meatless Beyond Burger.