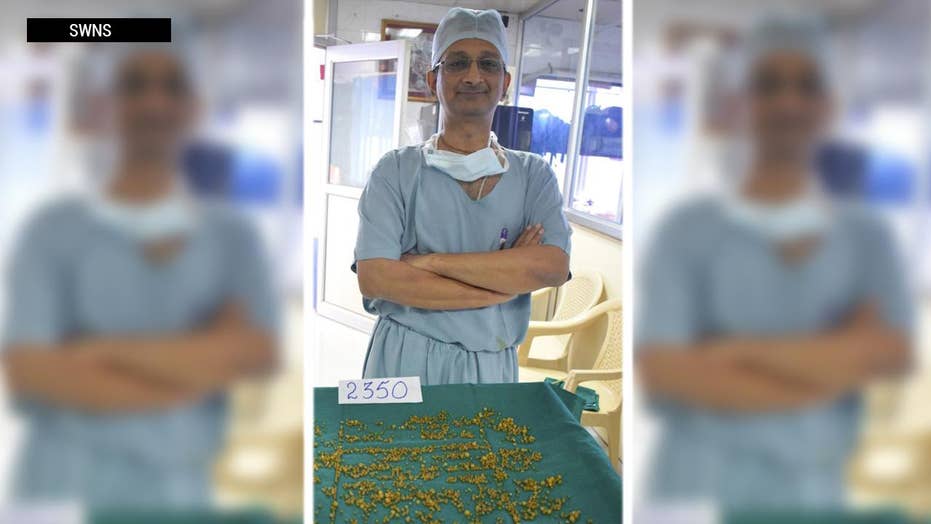 A woman has a staggering 2,350 gallstones removed during surgery. Gallstones are hardened deposits of bile that can form in your gallbladder, a small organ located under the liver. Many patients don't know they have them until they block a bile duct, causing pain in your abdomen, back or right shoulder.

Doctors were astonished after they removed more than 2,000 gallbladder stones from a woman in Mumbai.

The team of doctors who performed the 30-minute surgery under the supervision of laparoscopic surgeon Dr. BC Shah were left baffled after they counted the number of stones removed. (© Goal Post Media / SWNS.com)

According to SWNS, a 50-year-old woman who was suffering from abdominal pain for 18 months decided to delay surgery when doctors diagnosed her with gallstones in November of 2016. Even though her doctors advised surgery to remove the stones, the woman opted for “alternative treatments.”

But when the pain became unbearable, she visited Mumbai’s Bhaktivedanta Hospital, where doctors confirmed her previous diagnosis. “She was admitted earlier this month, and an ultrasound confirmed what was found in the earlier investigations," the woman’s surgeon told SWNS.

Dr. Bimal C. Shah successfully removed 2,350 gallstones from the woman, “Gallstones, measuring up to 10 to 12 millimeters were removed through surgery which lasted about 30 minutes.” (© Goal Post Media / SWNS.com)

Dr. Bimal C. Shah successfully removed 2,350 gallstones. He said they measured up to 10-12 millimeters and the surgery lasted about 30 minutes.

"The patient is fine after the surgery and is recovering well,” the laparoscopic surgeon said.