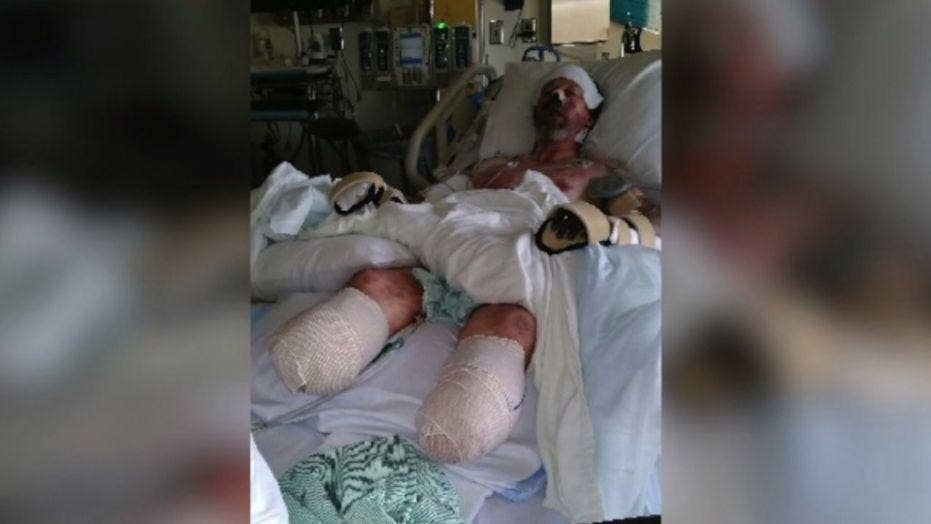 Greg Manteufel from Wisconsin contracted a dangerous blood infection after he was licked by a dog, possibly his own. What he originally thought was the flu, turned out to be a serious bacterial infection that forced his doctors to amputate his legs.

A 48-year-old man with a history of good health and who has spent his life around dogs was forced to have all of his limbs amputated after contracting a rare blood infection that likely came from his own pooch.

Greg Manteufel, of West Bend, Wisc., landed in the emergency room last month with what he thought was the flu, Fox 6 Now reported.

According to Manteufel's wife, he's spent his whole life around dogs. (Fox 6 Now)

“It hit him with a vengeance,” Dawn Manteufel, his wife, told the news outlet. “Just bruising all over him. Looked like somebody beat him up with a baseball bat.”

Subsequent testing revealed that Manteufel had contracted an infection from a bacteria identified as capnocytophaga, which is found in dog saliva. The bacteria can cause severe infections in people with weakened immune systems, and is spread through bites or close contact with infected dogs.

Patients infected with the bacteria may exhibit blisters around the bite wound, redness or swelling, fever, diarrhea, vomiting, headaches and muscle and joint pain. According to the Centers for Disease Control and Prevention (CDC), symptoms will typically appear within three to five days, but can take up to two weeks to present themselves. Severe infections can be fatal within 72 hours after symptoms appear.

“This infection in his blood triggered a very severe response on his body,” Dr. Silvia Munoz-Price, an infectious disease specialist, told Fox 6 Now. “More than 99 percent of the people that have dogs will never have this issue. It’s just chance.”

Manteufel has undergone several surgeries to amputate his legs and arms. (Fox 6 Now.)

The infection caused Manteufel’s blood pressure to drop, and the circulation to his limbs decreased, causing those limbs to turn black.

Dawn Manteufel said that within one week, her husband’s legs were gone, followed by more surgeries to remove portions of his hands, and then half of both forearms.

“Furthermore, all areas of Greg’s body and tissue was affected by the bacteria and the sepsis, the [doctors] say his nose will need extensive repairs, which means he will need plastic surgery to rebuild a new healthy nose,” a post on the family’s GoFundMe page said. “Greg is going to need several more surgeries, lots of time and his family by his side to get [through] this life-changing event.”

Dawn Manteufel said that they are focused on what her husband has left, rather than what was taken away.