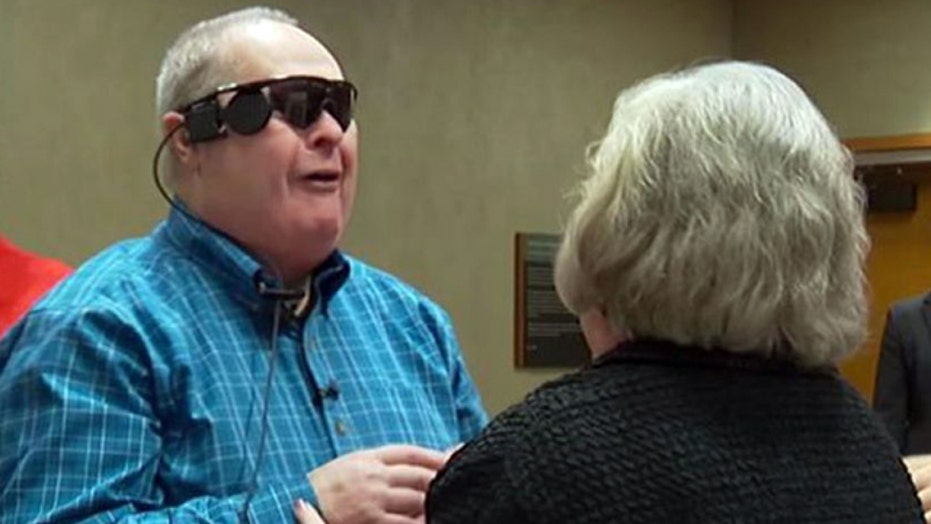 Allen Zderad, 68, has retinitis pigmentosa, a degenerative, genetic eye disease that affects the part of the retina that translates light into sight. The condition progressively stole the Forest Lake man’s vision over the course of his life.  Zderad uses a cane to walk and has leaned on his wife, Carmen Zderad, as his sighted guide since losing his ability to see.

“Ten years,” Zderad told Valley News Live of the last time he saw his wife, “but I still kiss her with my eyes closed.”

Zderad is the 15th person to receive the “Second Sight Argus II” retinal prosthesis system, which the Food and Drug Administration (FDA) approved for implantation in January 2014. The technology reportedly took 25 years and an estimated $300 to $500 million to develop.

Implanting the bionic eye involves the insertion of 60 electrodes into the retina. Zderad’s surgery took about three hours and, two weeks later, he can now see with the artificial vision.

"It's a bionic eye— in every sense of the word. It's not a replacement for the eyeball, but it works with interacting with the eye, Rayond Iezzi, the Mayo Clinic retinal surgeon ophthalmologist who chose Zderad as the first Minnesotan to receive the bionic eye, told Valley News Live.

“Mankind has been seeking to cure blindness for 2,000 years or more,” Iezzi added, “but only in the past quarter of a century have we had the electronics and the packaging and all the other things come together to build a retinal prosthesis that could restore sight to the blind."

The camera in Zderad’s pair of glasses run on a camera pack that sends information to the electrodes implanted in his retina. That process replaces the damaged retinal cells and sends signals directly to the optic nerve, according to Valley News Live. The device generates pixelated scenes of mostly black and white images, but despite the less-than-perfect eyesight, Zderad and his wife are grateful.

The success of the technology is just as meaningful for Zderad’s 13-year-old grandson Caleb, who has inherited the eye disease and faces loss of eyesight without aid.

“He can succeed," Zderad said of his grandson. "He's defined not by his limitations but by the ability God has given him… I hope he appreciates that."

Iezzi is reportedly preparing to implant the device in a second patient and researching whether the technology may be able to help patients with other eye conditions such as glaucoma or soldiers who may have lost their eyes in combat.

RELATED: “The vision I have left”: One woman’s story of living with degenerative eye disease