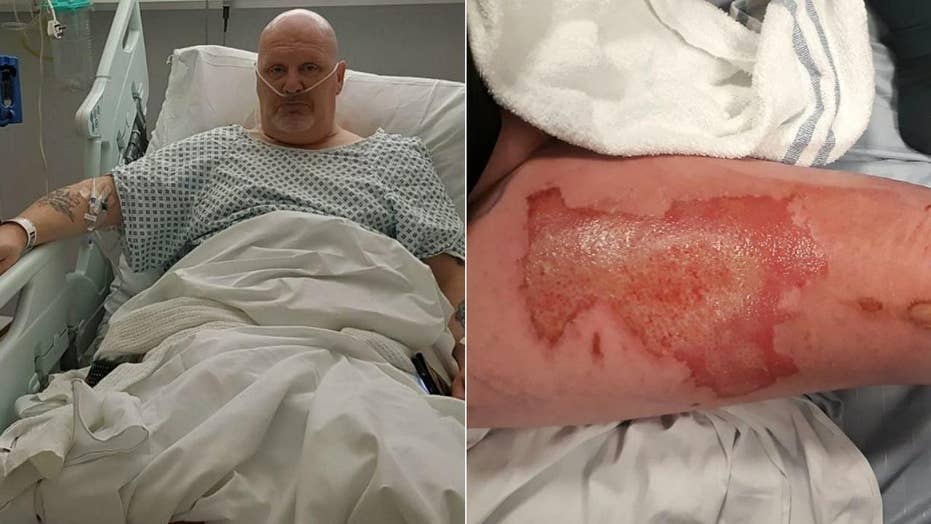 A vape pen allegedly explodes in man’s pocket and leaves him with third-degree burns. Bob Allsopp claims he was walking his dog when the KangerTech e-cigarette in his pocket bursted into flames.

A former smoker whose vape pen allegedly exploded in his pocket leaving him with severe burns has spoken out from his hospital bed to warn others about the potential dangers of using the popular device. Bob Allsopp alleges he was walking his dog when his leg suddenly burst into flames.

“It sounded like opening a bottle of pop,” Allsopp, of Leeds, England, told SWNS. “I looked down and my whole thigh was on fire.”

Allsopp said his KangerTech e-cigarette was in his pocket, a habit that he picked up in 2015 after looking for ways to quit smoking. He said he noticed the battery was low, so he swapped it out for another one produced by another brand that he had purchased on the Internet.

Allsopp said he had never had problems with his device before, but claims to have used a battery from a different brand after his original was running low. (SWNS)

KangerTech is a China-based company that “has been striving to make every device 100 percent safe for customers.” It was not immediately clear if the company warns against using another brand’s batteries in their products, but it does warn of counterfeit products being sold by third-party vendors. It was not clear where Allsopp purchased his KangerTech device.

KangerTech did not immediately respond to request for comment.

“I was on fire for about 30 seconds,” he told SWNS. “When I got home I had to peel my jeans away and put them outside as they were still smoldering.”

Allsopp said he is fighting off an infection before doctors can schedule a skin graft to repair the damage.  (SWNS)

He went to his local hospital, but was transferred to a burn unit at Pinderfield Hospital, where more than week later he remains. Allsopp said he’s on antibiotics in addition to painkillers to treat an infection, and then will have a skin graft.

“I have third-degree burns across my whole right leg,” he told SWNS. “I’m completely bed-bound and can’t stand up longer than 10 minutes. I can’t walk at the moment as I’m just in so much pain.”

Allsopp said that he had always purchased the same product, and hadn’t had any issues before, but that nurses have told him about other patients with similar trauma.

“I just want to warn people to be ultra-careful,” he told SWNS.