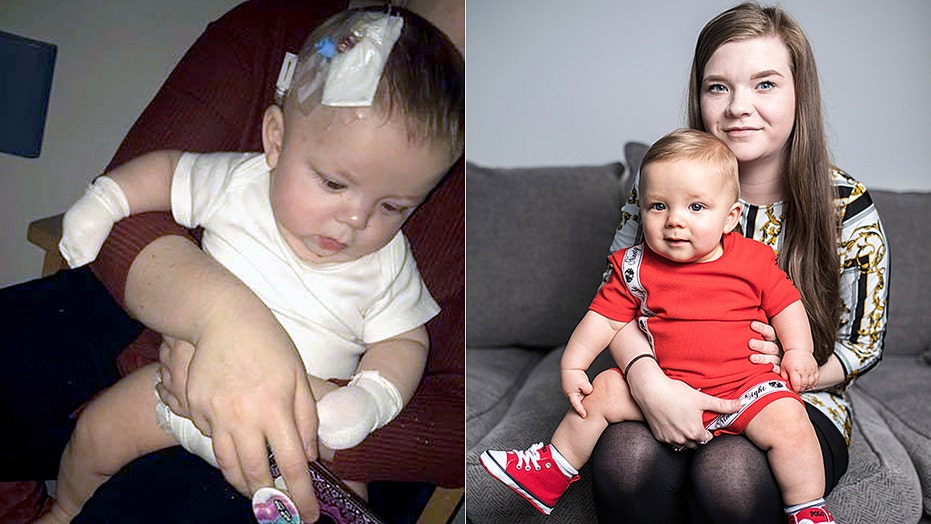 A 4-week-old baby in the U.K. was left fighting for his life in the hospital for over two months this fall after his mother claims he contracted the herpes virus from a kiss at a friend's christening. Ashleigh White, of South Yorkshire, said she is sharing her son Noah Tindle’s scare in an effort to warn other parents about the dangers of the herpes virus.

“What I didn’t realize is that even if you don’t have an active cold sore, you still do carry the virus in your system and saliva, meaning you can never be too careful,” White, 21, told Caters News Agency.

White said her son nearly went blind in his right eye after she noticed he had swelling and blistering a few days after attending a christening party in September 2018. She told the news outlet that a doctor initially dismissed it as a blocked tear duct, but after a few days of worsening symptoms she remembered reading a story about a baby with herpes and took him back to the doctor.

According to Metro.co.uk, the now 9-month-old then tested positive for HSV-1. The herpes simplex virus (HSV) typically causes skin infections and is divided into two types. HSV-1, which is what Noah tested positive for, causes small blisters on the mouth, eye or lips, while HSV-2 typically affects the genital area. Any type of HSV in infants can cause severe illness or even death, according to the New York State Department of Health.

Noah, pictured during his recurrence in March, and right healthy, allegedly contracted the virus from an infected person at a christening. (Caters News Agency)

Most people with HSV-1 can shed the virus in their saliva with no symptoms, or they may have a small cold sore. Infected newborns typically present with a low fever first before symptoms progress to poor feeding and skin blisters. Newborns with HSV require hospitalization and antiviral medication for 21 days, but even with treatment some newborns may suffer brain damage or death.

“We went to a christening where friends were holding and kissing him — it could’ve been any of them,” White said.

White said they caught Noah’s infection before it entered his bloodstream, but the infection came back in March and he had to be hospitalized again.

‘I just want to make more people aware of the risks and consequences of kissing a baby, especially a newborn when you suffer from cold sores as I know how heartbreaking it can be seeing your baby so poorly,” she told Caters News Agency.