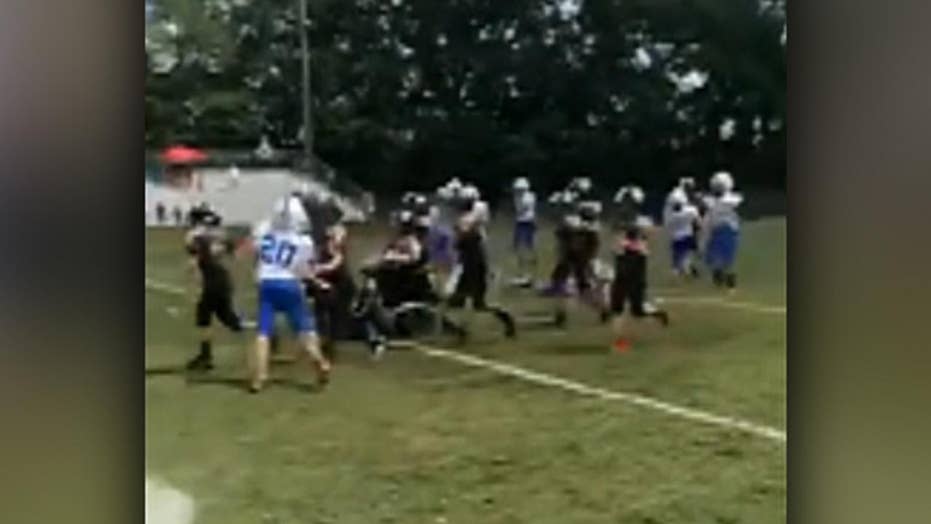 Raw video: Dream comes true for 5th grader, who was diagnosed with cerebral palsy as at toddler, when he scored a touchdown during game in Georgia.

It’s every pee-wee player’s dream to score a touchdown in a big rivalry game, but for one Georgia 10-year-old, his rushing drive had extra meaning.

Hayes Hutto, who was born 13 weeks early and spent 75 days in the NICU, was diagnosed with cerebral palsy at 18 months old and relies on a motorized wheelchair to get around. The Clemson Tigers’ diehard loves football, but hadn’t been able to be a part of the action until Saturday, when his friends asked him to join the Commerce Tigers for their game against the Jefferson Dragons.

Hutto suited up in the team’s gold and black, complete with a helmet and mouth guard, and got ready to face off against their rivals.

“At the end of the game against Jefferson and his cousin Britton, they allowed one more play for him to run the ball,” Jon Hutto, the boy’s dad, posted on Facebook.

According to Fox 5 Atlanta, Commerce quarterback Brody German took the handoff and gave it to Hutto, who was laser-focused on the end zone. He carried the ball to the cheers of “Hutto! Hutto!” from the sideline while a game announcer counted down the yards he had left.

“Thank you everyone from both sides to allow this to happen,” Jon Hutto posted. “Commerce coaches to Jefferson coaches and Commerce Rec. Thank you so much for making his dream come true. One day he will run the ball on his own power.”

BOY SURVIVES BEING IMPALED IN THE FACE BY METAL MEAT SKEWER

According to a the “Hayes’s Walk” Facebook page, Hutto attends physical and occupational therapy, but struggles with some motor skills. He got his motorized wheelchair several years ago, which has helped him gain some independence.

“Hayes is loved by everyone that meets him,” a post on the Facebook page said. “He has a love of life like no other child I have ever met.”