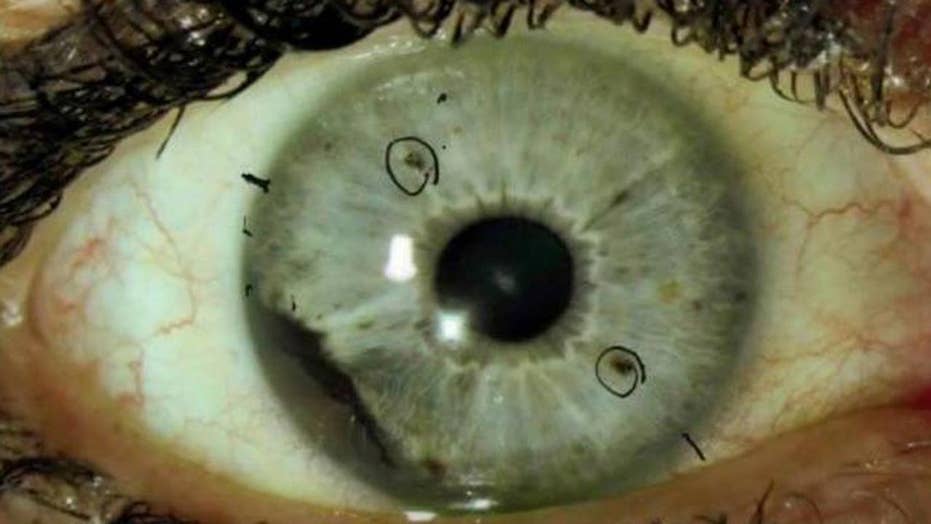 What is ocular melanoma?

Several Auburn University graduates and more than a dozen North Carolina residents have all developed a rare form of eye cancer in a case that has left doctors baffled. What is ocular melanoma and how rare is it?

Several Auburn University graduates and more than a dozen North Carolina residents have all developed a rare form of eye cancer in a case that has left doctors baffled.

Ocular melanoma is diagnosed to about 2,500 people a year but statistics show two towns – Auburn, Ala., and Huntersville, N.C. – have a high number of patients living with the cancer, Healthline reported earlier this month.

Ocular melanoma can be detected by people who have spots in their iris. (Auburn Ocular Melanoma Page)

“We see patients from all over the country and some patients from outside of the country. Certainly if we have patients who know each other or who lived and grew up in the same town, that has been kind of a red flag for us in trying to figure out if there’s something else going on,” Dr. Marlana Orloff, an oncologist at Thomas Jefferson University Hospital in Philadelphia, told Healthline.

Auburn, the home to one of the state’s largest universities, has about 63,000 people living in the city. Thirty-six Auburn graduates have been diagnosed with the rare cancer, including a group of friends who developed it years apart. In Huntersville, 18 people were diagnosed with the cancer.

Juleigh Green, Allison Allred and Ashley McCrary were all friends during their university days and were astonished to learn they all shared the same cancer.

The treatments for ocular melanoma include surgery and in some cases removing the eye. (Auburn Ocular Melanoma Page)

"What's crazy is literally standing there, I was like, 'Well, I know two people who've had this cancer,'" McCrary told CBS News on Monday.

Ocular melanoma develops in cells that produce eye pigment and can be detected when a person’s eyes form spots, Healthline reported. Symptoms include “blurry or distorted vision, a blind spot in your vision, seeing ‘flashing’ lights or a dark spot in your field of vision.” Treatment for the cancer include surgery and in some cases removing the entire eye. There is no known cure for the cancer.

RENOWNED AUSTALIAN SCIENTIST DAVID GOODALL, 104, WILL TRAVEL TO SWITZERLAND TO END HIS LIFE

Researchers were studying the patients to see if there is any link between the patients and the cancer, Orloff told CBS News.

"Most people don't know anyone with this disease," Orloff said. "We said, 'OK, these girls were in this location, they were all definitively diagnosed with this very rare cancer – what's going on?'"

The three friends said it was difficult to be live with the cancer, but came together and made a Facebook page for others who have also been diagnosed with ocular melanoma.

"What's crazy is literally standing there, I was like, 'Well, I know two people who've had this cancer."

McCrary said 36 people have responded to the women saying they also attended the university and have the cancer.

"We believe that when we're looking at what's going on in Huntersville, North Carolina, and what's going on here, there is something that potentially links us together," she said.

"Until we get more research into this, then we're not gonna get anywhere. We've got to have it so that we can start linking all of them together to try to find a cause, and then one day, hopefully, a cure," said Lee.

Residents of Huntersville who have the diagnosis have also created a Facebook page.

The university said in a statement that they were “hopeful that research and awareness will advance the prevention and treatment of this cancer.”