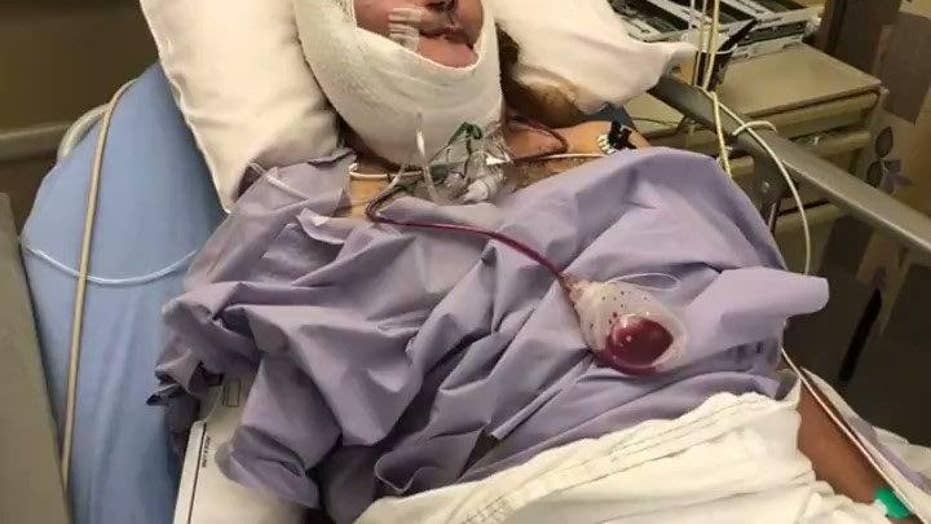 When Eddy Newton was 3 years old, he developed a red blotch on his face. Then a lump under his right eye. His mother shuffled him from doctor to doctor, hospital to hospital until a biopsy finally came back with a diagnosis.

“The doctor pulled out a picture of [Joseph] Merrick and told me this is what I will look like,” Eddy Newton, 47, recalled to Fox News. “And that I probably wouldn’t live past my eighth birthday.”

Joseph Merrick was, of course, the 19th-century British man who became the poster child for neurofibromatosis, better known as “Elephant Man” syndrome. Just a few years shy of 50 – Newton has defied the odds and is one of the oldest persons to survive such a severe strain of the condition.

But each day brings a succession of battles to stay alive. To date, the native of Riverside, Calif., has had to have more than 30 major surgeries, and more than 50 minor ones, to control the rampant and deadly disfiguration. When he was just 7 years old, a doctor removed a 7.5-pound tumor from his cheek.

Eddy has undergone more than 30 major surgeries and more than 50 minor ones to control the growth of tumors. (Provided Eddy Newton)

Yet the most challenging aspect of living with “Elephant Man syndrome” has been contending with the deep psychological scars that it renders and the taunting that comes from his physical appearance.

“There was a lot of bullying, and I changed schools several times,” Newton recalled of his turbulent childhood. “But there were good people too. I’ll always remember my first day of elementary [school], and a classmate pushed his cheek out to imitate me. One girl saw it, and she jumped off the chair and fought him over it.”

Even today, Newton still marvels at the adults who mock him – and he marvels at those who boldly come to his defense. He recalled walking into a local diner just a couple of weeks ago, when a man who was there with his family immediately started bellowing “Oh my God, I would put a gun to my face if I looked like that!”

“A big biker stood up – he must have been about 6’9"--and warned him to sit down before he endured the most embarrassing six seconds of his life,” Newtown recounted.

The disease has caused tumors to sprout wildly throughout his skull, producing extreme disfiguration and chronic pressure on his brain. That results in debilitating migraines that don’t last weeks, but months.

A challenging childhood for Eddy in Riverside, Calif. (Eddy Newton)

“They come in waves, sometimes lasting eight weeks," Newton said. "Then there might be a seven-to-10 day period where they go down. I’ve been dealing with this since I was 12 years old.”

And the surgeries are never-ending.

“I’ve got a wide spring in my eyelid to allow my eye to open and close. I’m all cut up on my neck and torso too,” Newton noted.

Most recently, Newton went under the knife to remove an array of new tumors mottling his face and to revise his jawline, which doctors hope will assist with his breathing. But rounds of chemotherapy and radiation are also part of his bid to keep living and control the continuous tumors.

According to the National Institute of Neurological Disorders and Stroke, neurofibromatosis is a group of three genetically distinct disorders that cause tumors to grow in the nervous system. Around half the cases are inherited, and the other half result from a “spontaneous genetic mutation of unknown cause.”

Newton inherited the syndrome from his mother, who has a less severe case. Newton is one of less than 10,000 in the world to have been diagnosed with such a potent strain of neurofibromatosis.

The dizzying number of surgeries has left Newtown with deep facial and neck lacerations, a sagging eyelid and chin, no right ear, and only a few teeth left. (Eddy Newton)

Medical scientists have not yet discovered how to stop neurofibromatosis from proliferating through the face and body.

The dizzying number of surgeries has left Newtown with deep facial and neck lacerations, a sagging eyelid and chin, no right ear, and only a few teeth left.

The intensity and frequency of his migraines and the ceaseless surgeries have made it difficult for Newton to find and hold down a job, and the struggle to make ends meet has resulted in dilapidated living conditions. Throughout his adult life, Newton has tried his hand at an array of positions.

For almost 20 years, the devoted music lover worked in a Southern California record store, then in a restaurant owned by a friend, followed by eight years taking random construction and building jobs in the Riverside area.

But at his lowest point, in 1996 he resorted to taking a job with the Ringling Brothers and Barnum & Bailey circus, where he traversed the American countryside as the “Man with Two Faces.”

“I was the sideshow freak," Newton said. "Whenever I left the tent area, if I wanted to get something to eat, I had to cover my face with a hood so that nobody would get a free look. Emotionally, I was dead inside. I felt nothing. Finally, after nine months, I woke up and asked myself what the heck I was doing. I went to the airport in Tennessee, and I flew home.”

But his wounds are his words. And rather than shirking from public view, Newton – who shrugs off the gasps and double stares – has long been speaking to students in Southern California about self-esteem issues. That trajectory began on Oct. 1997, when a disabled man in a wheelchair came into the record store where he was working and asked him to talk to some high schoolers.

“Something amazing happened that day," he said of the first time he spoke to students. “A girl named Raquel stood up and told me she was blind, but she came over to me and said she would take a picture of me with her hands. It was like I had just witnessed a miracle that day, watching this young girl come out of her shell. I knew then I wanted to help people, stop with the bullying and cyberbullying and all the attacking people do to each other.”

For more than two decades, Newton has been trying to improve the lives of others. He volunteers at an orphanage in Tijuana, Mexico, and spent four months assisting the homeless after Hurricane Katrina ravished the livelihoods of thousands in 2005.

Recently, he founded a non-profit ministry, “Eddy Unmasked." He hopes that in sharing his story with more teens across the country, he can foster a deeper awareness around bullying and the struggle to overcome low self-confidence.

Newton’s friends recently launched a GoFundMe campaign on his behalf to raise funds for his youth ministry, and enough to repair his ailing mobile home.

Newton said his father abandoned him at just 7 years old – disappearing without so much as a goodbye. Since then, he has leaned on his mother as a beacon of love and support.

“My mom has been helping me her whole life,” Newton said. “It is time to take care of my mom.”