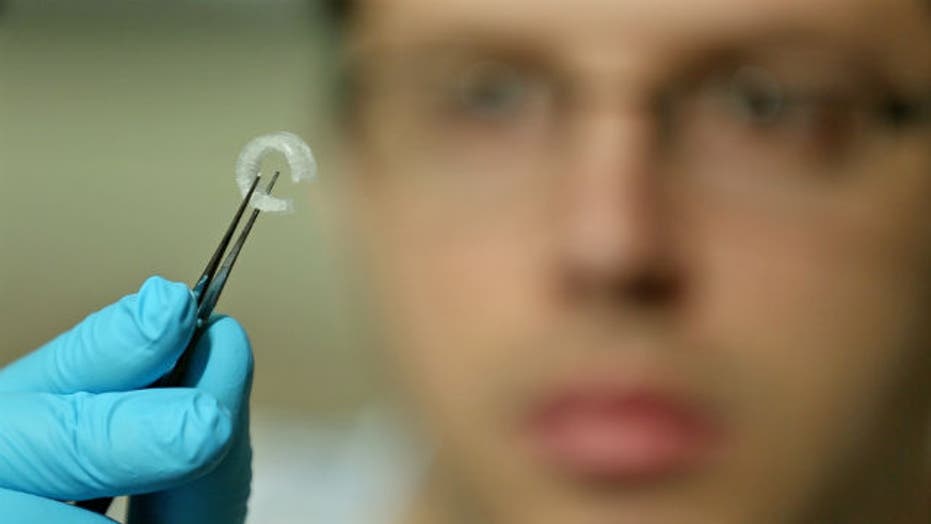 3D printing has made tremendous strides in the medical field: Models of stents, prosthetics and replacement skulls can now all be replicated using this emerging technology.

Over the next five years, the number of printers being shipped annually for medical use will have almost doubled, according to SmartTech Markets Publishing, a market analysis firm for the 3D printing sector.

As doctors and scientists continue to work on new ways to advance surgical options with 3D printing, a team of medical professionals at the Feinstein Institute for Medical Research in Manhasset, N.Y., are 3D-printing tracheal segments using living cells.

Twenty-eight-year old Todd Goldstein, investigator at the Feinstein Institute for Medical Research, and PhD candidate at the Hofstra North Shore-LIJ School of Medicine, created cartilage rings to repair a damaged or diseased trachea, or the body’s windpipe.

One of the biggest challenges surgeons face in tracheal reconstruction is that the length of the trachea is fixed. When a doctor removes a long and diseased section of a trachea, they need enough trachea length to put the two healthy ends back together.

Dr. Lee Smith, chief of pediatric otolaryngology at Cohen Children’s Medical Center, worked with Goldstein to find a better solution for his patients.

“For a subset of children, there aren't really any good options out there. So the question that comes up is, ‘Can we replace that segment of trachea that's diseased with a new section of trachea?’ And that's where bioprinting comes in,” Lee told FoxNews.com.

With help from his mentor, Daniel Grande, PhD, director of the Orthopedic Research Laboratory at the Feinstein Institute, Goldstein modified a Makerbot Replicator 2x Experimental 3D printer to print with living cells.

First, MRI and CAT scans are used to replicate a 3D computer design of a patient’s trachea.

Once the design is programmed into the printer, two types of materials begin to build the trachea: a syringe comprised of living cells called 'bio-ink' and polylactic acid, or PLA, which is a naturally occurring filament.

Layer by layer, the printer will start building the scaffold, or the frame of the trachea ring, with PLA. Next, the machine switches and fills in the void space it created with the cells, Goldstein said.

“The bio-ink has all the nutrients and also the gel-like material that the cells need to live, and it also holds them in place,” Goldstein said.

The printing process can take up to two hours depending on the segment size.

After the printer is done building the trachea, it’s placed in a bioreactor so the cells can grow, multiply, and attach to the PLA until it’s transplanted.

“In our mind, it will allow us to address any complexity of the airways because our bio-printing technology will not be limited to just manufacturing a tube,” Dr. David Zeltsman, chief of thoracic surgery at Long Island Jewish Medical Center, part of the North Shore-LIJ Health System, who also worked with Goldstein on his prototype, told FoxNews.com. “We can practically make any shape, any branching patterns of the airways, and address it in anybody starting from children and ending in adults.”

A 3D-printed trachea segment could also offer patients an alternative to invasive procedures, such as a tracheostomy— an opening surgically created through the neck into the trachea that is often kept open with a hallow tracheostomy tube.

Goldstein said his team’s proof-of-concept model suggests that the cells are able to survive the printing process and that successful research conducted in animal models offers further promise.

“If this [3D printed trachea ring] is the repair for the damage, we can come and put it in place, and it'll be living and taking care of the part that we took out,” Goldstein said.

Goldstein and his colleagues still have a long way to go before they can use their prototypes in humans.

“It would be reasonable to consider that we are one to two years away from applying for FDA [Food and Drug Administration] approval”, Zeltsman said.