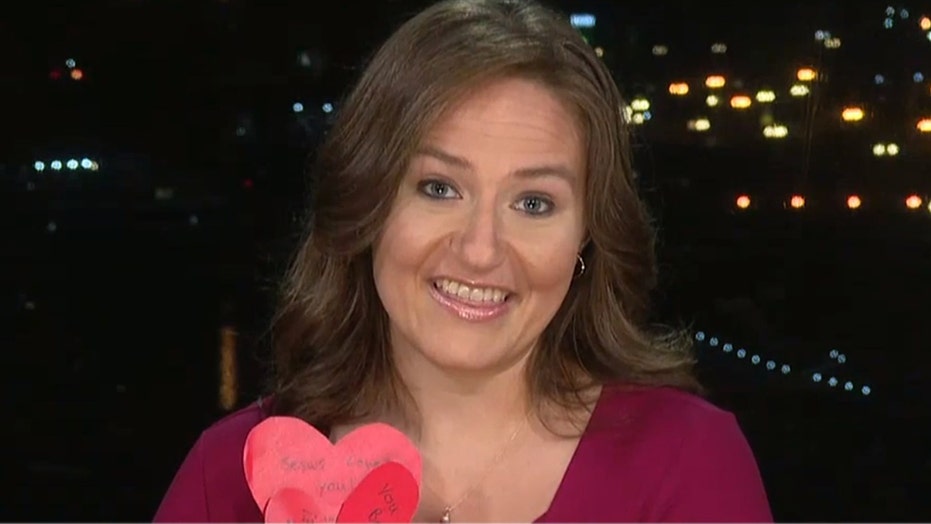 A federal judge ruled in favor of a Christian student who was told by a Green Bay, Wis., public college that she couldn't hand out religious-themed Valentine's Day cards.

Polly Anna Olsen, who was invited by President Trump to be the face of a free speech on campus executive order earlier this year, told "Fox & Friends" Friday that the victory is being celebrated at Northwest Wisconsin Technical College (NWTC).

Olsen, a paralegal student who said she was carrying on her late mother's Valentine's tradition, was stopped by campus security on Feb. 14 last year after handing out paper cutouts with messages like "Jesus Loves You!" and others with Bible verses on them. She was accused of violating a school policy.

Polly Anna Olsen, a paralegal student at Northeast Wisconsin Technical College, sued her school because of a policy that stopped her from handing out Valentine's Day cards on campus. (Fox &amp; Friends)

Represented by the conservative law firm Wisconsin Institute for Law & Liberty (WILL), Olsen won her case last Friday after U.S. District Court Judge William Griesbach ruled NWTC violated her First Amendment rights, saying the school "had no more right to prevent [Olsen] from handing out individual Valentines than it did to stop her from wishing each individual to have a 'good morning a blessed day.'"

"It's not just my rights, it's everyone's rights on campus that have been violated."

"Several teachers congratulated me," she said. "They are very proud that I stood up for our rights, because it's not just my rights, it's everyone's rights on campus that have been violated."

Valentine's cards student Polly Anna Olsen was stopped from handing out on campus by a security officer.

Olsen explained it was because of her faith: "Well, when Jesus died on the cross and came back to life, he made it so that there's consequences for sin and he paid them, so now there's accountability."

But Jeffrey Rafn, NWTC president, told Fox News in a statement that the ban was because Olsen entered an office without permission, not because of her loving message.

"The ruling talks about common spaces and I think we'll make it clear that students can be in any of the common spaces," Rafn said. "But the offices are like any other office, you don't normally go into a place and you can't just walk into any office that you want to walk into."

The office that the school president appears to be referring to was one that she said she had entered for seven years. And after Friday's ruling she plans to hand out the cutouts not just on Valentine's Day, but every day.

"I'll be handing them out any day now," Olsen, who plans to continue to share her story with the Leadership Institute, added. "That's kind of become my calling card."