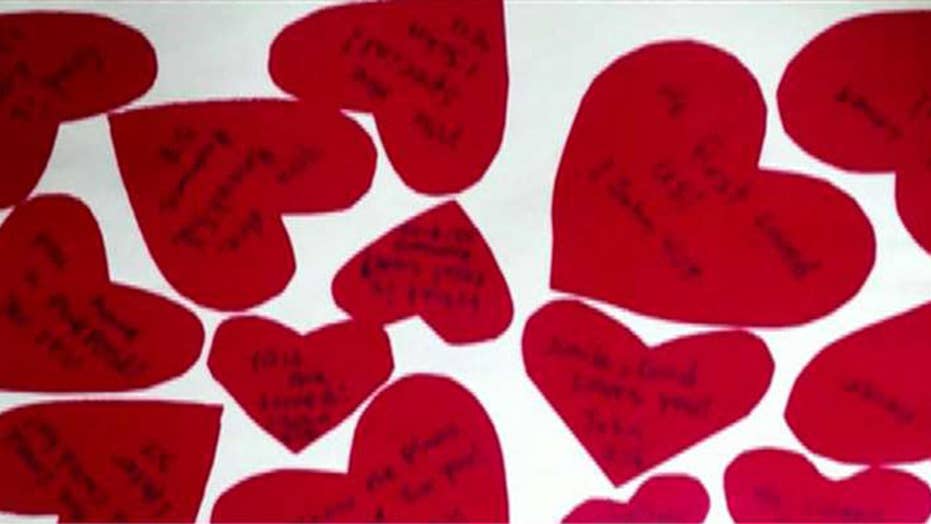 College bans student from giving Valentine's with Bible references on them. Wisconsin school says the student was in an unauthorized area.

A student at a Green Bay, Wis. public college is suing her school in federal court after campus security told her she could not hand out Valentine’s Day cards with Bible verses on them, citing school policy.

Polly Olsen, a paralegal student at Northeast Wisconsin Technical College, told Fox News she has been handing out the religious-themed hearts on campus since 2009 with messages like “Jesus loves you! Romans 5:8” or “You are cared for! 1 Peter 5:8,” a Valentine’s Day tradition her late mother passed on to her as a child.

“I love my school, but I love freedom and God more,” Olsen said. “Being in America, everyone has the constitutional right to hand out Birthday cards, Christmas cards, invitations, notes, Valentines and whatever else they want that is under protected speech without getting approval. This freedom needs to be recognized not only at NWTC, but across the country.”

Valentine's cards student Polly Olsen was stopped from handing out on campus by a security officer. (Wisconsin Institute for Law & Liberty)

Ten minutes after Olsen started handing out “Jesus Loves You” Valentines for fellow students, friends, and faculty in the student center on campus, security was called to stop her. A security officer took Olsen to the security office and told her “she was not allowed to hand the valentines out because school policy prohibits it,” according to the security incident report filed on February 15.

NWTC officials told Olsen she was violating the school’s public assembly policy, which sets a designated space for distribution of literature, picketing or displaying protest signs – otherwise known as a “free speech zone.”

“The first time the school stopped me from handing them out was in 2014, and after several months…they finally agreed to change policy and educate their staff on students’ constitutional rights,” Olsen said, but when she was reviewing policy last October, she noticed nothing had changed.

“I already tried the school’s way of doing things and they lied to me,” she said.

Polly Olsen, a paralegal student at Northeast Wisconsin Technical College, is suing her school because of a policy that stopped her from handing out Valentine's Day cards on campus. (Wisconsin Institute for Law & Liberty)

“The Bible theme had nothing to do with being stopped,” Smits said. “If she wanted to hand out baseball cards, it would be handled the same way. She was stopped because she was ‘going into areas unannounced and uninvited that are restricted to staff members and where students are not permitted to walk freely.’ She was stopped for disrupting a work area where she did not have business.”

“If that’s the case, the week before I should’ve had security called on me because I was in the same office…and they never said anything,” Olsen said.

Olsen’s lawyer, Wisconsin Institute for Law & Liberty president and general counsel Rick Esenberg, said regardless of whether the school is motivated by the religious content, the policy is unconstitutional.

“The problem is that speech was limited to a small zone,” Esenberg said. “A public university cannot put free speech in a box.”

Polly Olsen told Fox News she has been handing out Valentine's Day cards every year ever since she could walk, a tradition started by her mother who passed away in 2014. (Wisconsin Institute for Law & Liberty)

“Even assuming the college is correct that she was in an impermissible area, it's not clear where she could go. If she wanted to use the 'public assembly area' she would have to get permission from security, and the college bans distribution of literature with 'offensive' content,” Steinbaugh said. “What's offensive is the notion that security guards, or any other government officials, have the right to grant or deny permission to hand out pamphlets – or Valentines.”

Olsen said she hands out the hearts “because of the love that God has shown is why I show it to others. When I asked Jesus to be my Lord and Savior at 4 years old, I ran and told my mom, ‘I’ve got Jesus! I’ve got Jesus,’ and I wanted the world to know about this incredible free gift,” Olsen said, adding with laughter, “and I guess I haven’t stopped.”

Olsen said she just wants the school’s policy to protect freedom of speech for all students on campus.