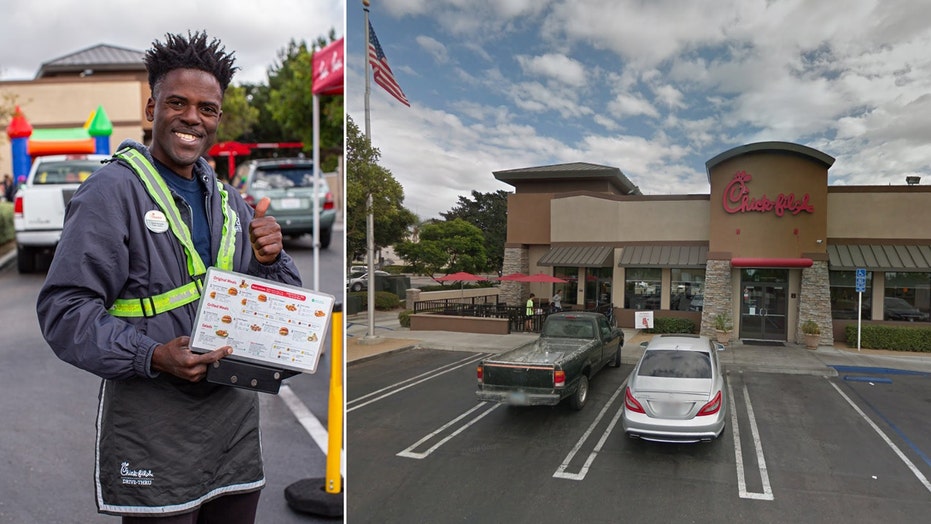 Chick-fil-A employee in Georgia leaps through a drive-thru window to save a little boy who was choking.

A Chick-fil-A employee working the drive-thru in in Chula Vista, Calif., is being celebrated for springing into action and saving a man's life, an act he credits to his faith in God.

When Tauya Nenguke, a 22-year-old team leader, noticed something suspicious going on across the parking lot last Wednesday night, he handed off his iPad to a co-worker and sprinted over to make sure everything was alright, FOX 5 reported.

What Nenguke found was a 20-year-old man going into cardiac arrest on the ground, surrounded by friends trying to perform CPR, according to Cheryl Shields, director of marketing and community relations for Eastlake Terraces Chick-fil-A, who shared the story on Facebook.

Nenguke, who wants to go to nursing school and had pre-nursing classes under his belt, immediately began chest compressions on the unresponsive individual and told the man's friends to call 911. He also taught the friends how to do CPR so they could take turns until paramedics arrived and took the victim to the hospital.

"The EMT stated that if it wasn’t for his quick action, this young man might not have survived," Shields wrote, calling the quick-thinking Chick-fil-A employee a "CFA Hero!"

Nenguke credits his faith and a calling for being in the right place at the right time.

"I knew that was the place where God placed me at that time," he told KGTV. "This was honestly a really big calling to be in health care because it was like instinct took over."

This isn't the first time a Chick-fil-A employee is being credited with saving a customer's life. In June, a Georgia employee jumped through the drive-thru window to save a young boy from choking.