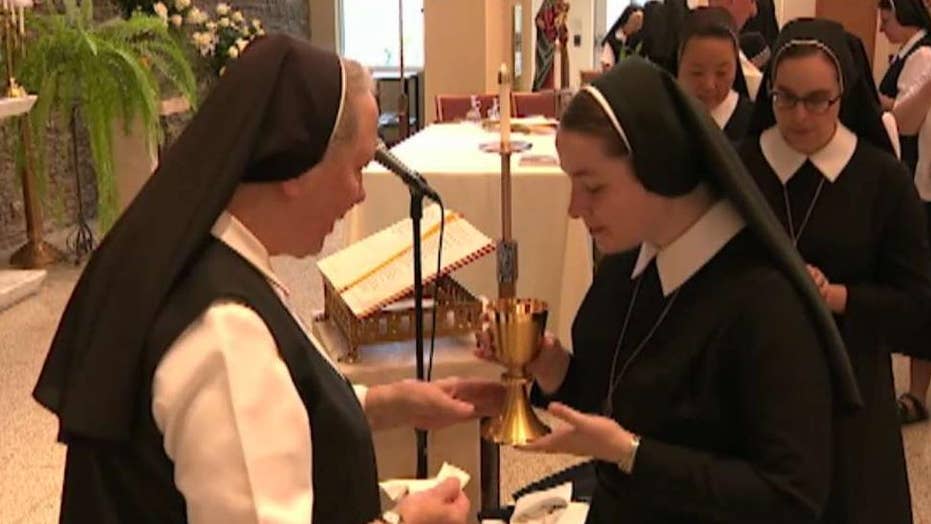 In an age of social media, a higher calling is now trending; Lauren Green reports on the growing youth movement in the nun community.

In an age of social media and obsessed with the ladder of success, a higher calling is increasingly trending. After a five-decade decline, the nunnery is making a comeback — driven by millennials. About 10 years ago, the average age of a woman taking her final vows was 40; today it's 24.

Sister Marie belongs to the Sisters of Christian Charity's Mallinckrodt Convent in Mendham, N.J. The convent is nestled on about 100 acres of green rolling hills. Decades ago, its neighbors were farm fields and cows. Today, mega-mansions dot the landscape leading up to the summit where the convent's cross can be seen from far away.

Last week, nine nuns renewed their vows, representing a nationwide turning of the tide as young women are increasingly committing themselves to chastity, purity and poverty.

TODD STARNES: ARE CELEBRITY CHRISTIAN INFLUENCERS DUMBING DOWN THE CHURCH?

One of them is 27-year-old Sister Mathilde DeLucy.

"When I came it just felt like a sense of hope...it was just like this is it," she says. "This is what I’m supposed to be doing ... God will do the rest whatever He has planned. I just need to trust Him."

"I think they’re reflecting that our hearts are made for more and they are figuring out that having everything at your fingertips does not satisfy you.”

Sister Mary Amata Reifsnyder, echoes that feeling: "This was how my heart was meant to love other people. And I think that each person in each vocation will find that ... in your husband or your wife, in a single's life in a religious community."

Religious life is an increasingly attractive option for a generation of women who are often more recognized for what they don't believe in.

According to Sister Deborah Borneman of the National Religious Vocation Conference, there has indeed been an uptick overall in recent new vocations to religious life. Newer members are choosing a variety of religious institutions to enter, not just a selected few. In 2018, 440 women and men entered 177 religious institutes in the United States. Adults overall are considering entering religious life at younger ages.

RAVI ZACHARIAS ON THE 'TOUGHEST' QUESTION FOR FAITH TODAY

“They are part of this newer generation,” said Sister Deborah. “They know nothing of religious life in the 20th century — it was never their lived experience. Even the movie 'Sister Act' does not resonate with them.”

Sister Bernadette McCauley, the vocation director at Sisters of Christian Charity, says, "I think God creates some people with this desire to belong completely to Him.”

A vocation to the religious life doesn't always mean giving up a career either. Sister Marie Jose is a registered nurse and works at a local hospital. Her paycheck is pooled with everyone else's to support the convent.

She, like the other young nuns are well aware – sometimes comically aware – of what they've given up.

Sister Marie Jose laughs when she talks about the plain, black, no-heel shoes the sisters wear. She says her 80-year-old grandmother has more fashionable footwear.

"My peep-toe pumps are gone!” she said.

But she, like all the young nuns, are more candid about what their generation is really seeking.

"I think they’re reflecting that our hearts are made for more and they are figuring out that having everything at your fingertips does not satisfy you,” said Sister Marie Jose. “It’s great until it leaves you longing for more. In whatever walk of life everybody’s longing for more in my generation. It takes that question to find what your vocation is."

These young nuns say while the world has offered them endless possibilities to pursue careers, motherhood and/or singlehood, the bottom line is they've found something better.