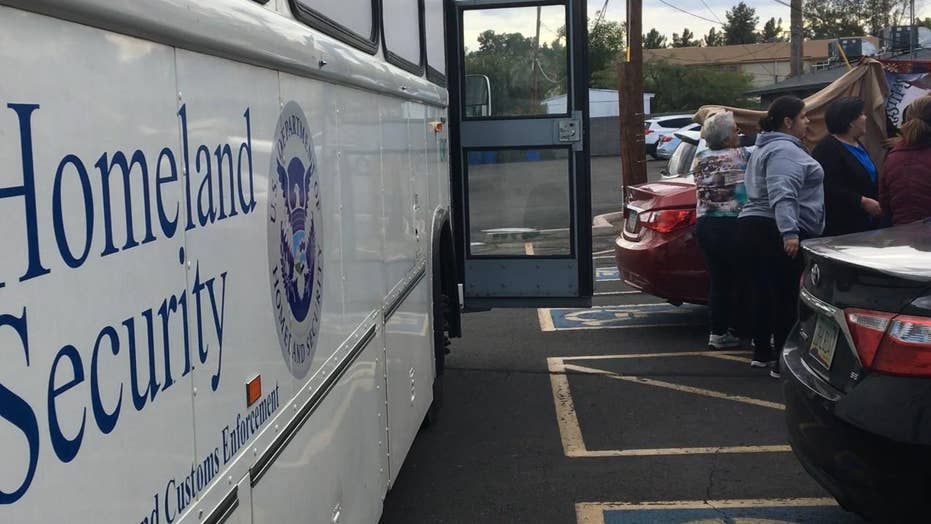 PHOENIX -- At the Longview Community Church last week, 26 migrants emerged from a bus and were greeted by the cheers of about a dozen church volunteers.

The church is among about a dozen religious institutions in the area taking in illegal immigrants from Immigration and Customs Enforcement, which has witnessed a large influx of migrants at its detention centers and has been using churches as overflow centers to ease the burden.

While ICE dropping off the immigrants at churches is nothing new in Arizona – a small network of religious institutions have regularly taken them in after they are processed and released from federal custody – the number of them arriving here recently has climbed considerably.

“The misconception would be we’re letting people in or we’re hosting people that shouldn’t be here—that’s not really true—whether they should be here or not, that’s up to the lawmakers and people like that,” Pastor Hubert said. “What we’re doing is humanitarian, it’s not about politics. It’s about protecting and meeting the needs of those who don’t have anything, who are helpless." (Fox News)

Over the past few months, ICE has dropped off hundreds of migrants at churches each week – raising the immigrant total in the area to 12,000.

SUPPLIES LOW FOR SHELTERS HELPING MIGRANTS AS HOLIDAYS NEAR

“All have been processed and have papers in the system but by law cannot be held by Border Patrol for more than three days,” said

But the drop-offs have come under fire by anti-illegal immigrant groups who accuse the churches of providing sanctuary for the immigrants. One group, the Patriot Movement, has protested every single local drop-off, so police officers have to show up at each one.

In Longview, as church volunteers cheered the immigrants inside, outside was a completely different scenario.

One of those migrants was a Mexican woman who fled to the US as an asylum seeker with her two children because she didn’t feel safe in her hometown of Chiapas, Mexico. She said a guy used to abuse her daughter and wanted to kidnap her when she grew up—she feared not being able to protect or defend her. (Fox News)

While the churches welcome sheltering and helping the immigrants, it has put them in the crosshairs of the fiery debate over immigration and border walls. Church leaders say they are exemplifying the lessons in scripture by helping those in need.

But critics disagree. Jennifer Harrison, one of the main organizers of The Patriot Movement, accuses the churches of incentivizing migrants to enter the country illegally.

Harrison said the group has seen men pick up Guatemalan women with young girls and is concerned about human trafficking. She also dismissed concerns that the immigrants were fleeing violence and persecution in their home country.

“Most of these people are looking for work,” Harrison said. “Most of these people know that if they bring a child with them, they're going to gain entry into our country. So, we don't offer economic asylum. And America is not a third-world migrant camp where our system is overloaded. They know this so they’re coming in by the numbers… so if you’re looking for an opportunity to work in the United States, we accept a million immigrants a year legally.”

Pastor Schwartz said although the Patriot Movement group has a right to free speech, the church volunteers also have a right to freedom of religion. She said the group’s protests are misguided.

“They want confrontation, they want problems but they are in the wrong place with the wrong people, they cannot come and protest us—they have to go protest Washington D.C.,” Schwartz said. “To the government people. Not to us. Because we save a lot of problems to the city, the state if we receive these people at the churches. Because if not, we will see a lot of people asleep in the street with children, 1,000 people asleep in the street...so we save (the) government money.”

Longview Community Church Pastor Agustin Hubert said it’s a little sad to see the hate directed at the churches. He said protesters should focus on the humanitarian aspect.

“The misconception would be: we’re letting people in or we’re hosting people that shouldn’t be here. That’s not really true—whether they should be here or not, that’s up to the lawmakers and people like that,” Hubert said. “What we’re doing is humanitarian, it’s not about politics. It’s about protecting and meeting the needs of those who don’t have anything, who are helpless.”

Schwartz said in his heart, he knows he is doing the right thing.

“I am a Christian,” Schwartz said. “I love Jesus, I love my neighbors.