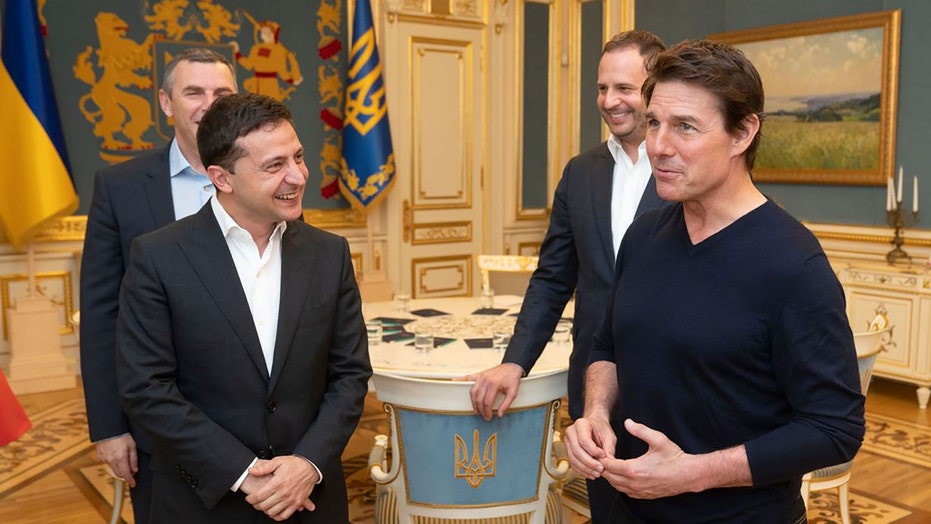 Ukrainian President Volodymyr Zelenskiy may be at the center of a United States impeachment scandal, but that doesn't mean he going to turn down a chance to meet one of the biggest actors in the world.

On Monday, he met with Tom Cruise, 57, who is in the Eastern European country to do some location-scouting for a potential movie.

Zelenskiy tapped his roots as a TV and film comedian when hosting Cruise in the Ukrainian presidential headquarters.

As Cruise walked in, Zelenskiy told Cruise, "You're goodlooking!," according to video excerpts released Tuesday by his office. The Hollywood star laughed and said, "It pays the bills."

Zelenskiy joked about how exhausting it is to be president and mentioned the stalled peace process for conflict-ravaged eastern Ukraine.

The video excerpts included no mention of President Donald Trump or the U.S. impeachment inquiry in which Ukraine plays a starring role.

Zelenskiy made headlines after a whistleblower revealed the Ukranian president's July 25 phone call with Trump during which he asked the Ukrainian leader to "look into" former vice president and current 2020 presidential hopeful Joe Biden.

The Ukrainian president's office also noted that "[Zelenskiy] had recently passed a law on compensation for foreign filmmakers in Ukraine." It will promote active development of the film industry and give a boost to international co-production.

"The Head of State expressed conviction that this law would make Ukraine attractive for investment by powerful filmmakers," a statement revealed.